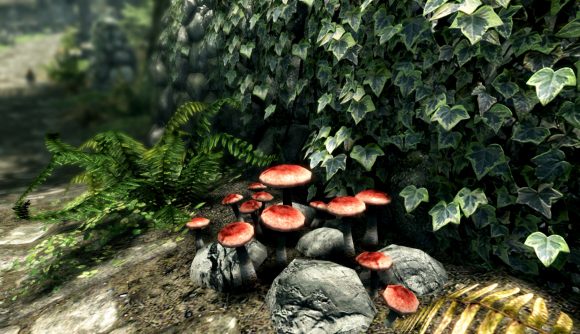 When you’re chasing down dragons and slaying monsters, it’s easy to miss the smaller details in Skyrim’s world. It’s time for a ‘stop and smell the flowers’ approach to the land of Tamriel, and now there’s a mod that virtually spruces up all the plants and vegetation in the game, allowing players to appreciate the finer aspects of horticulture.

Over on the Nexus mods page, JonnyWang13 has created two mods to add that sheen to Tamriel’s greenery. The plant mod overhauls flowers, vegetables, shrubs, and other smaller herbage, and the mushrooms mod covers spore, toadstool, and all the other weird fungi in the game.

JonnyWang13 writes that they created the mod form the vanilla textures using trained artificially-intelligent upscale-models. On r/Skyrimmods, he says, “We’ve been experimenting with AI upscaling of vanilla textures for some months now in order to preserve and improve the vanilla aesthetic.I’ve sliced, combined, merged, edited, and overlaid the various models to produce higher quality textures than simple AI-upscales alone. They look good in game and details that were originally lost when Bethesda downscaled, such as thorns on bushes, are now evident.”

Both these mods are part of the ‘Cathedral Concept’, a term meaning that the mod was created as a joint effort by the community. Individuals can contribute something small but then these contributions construct something bigger – like a Cathedral. This is opposed to ‘Parlor’ modding where mods are considered privately owned works.

Read more: Check out our list of the 100 best Skyrim mods

You can download both the plant and mushroom mods on Nexus Mods. If you’re after more modding then check out the Skyrim mod that brings the Game of Thrones Starbucks cup to Tamriel – and how about the mod that allows to you block arrows – Witcher 3-style.