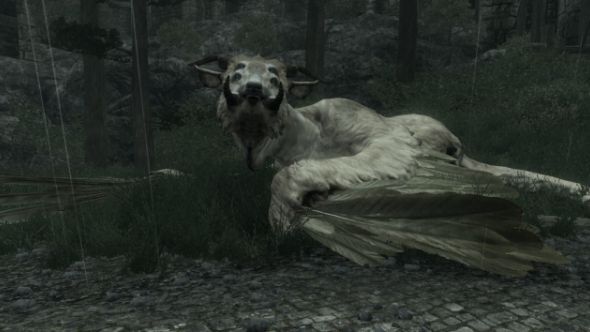 Enderal is that rarest of ambitious Elder Scrolls mods: finished. And that’s not the end of its merits either. This total conversion harbours outlandish Fumito Ueda-style creatures, verdant countryside scored by tinkling piano, and verbose NPCs with geopolitical nous to rival The Witcher’s.

Sometimes it’s better than Skyrim. Sometimes it’s worse. And when you talk about why, you start to realise what made Bethesda’s very best game tick. 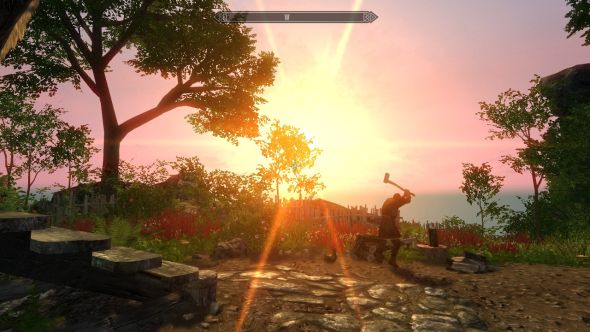 In the Elder Scrolls series, you’re the director. You steer the camera, and no cutscene ever wrenches it from you. That’s because Skyrim belongs to a long tradition of design, also observed by the likes of Deus Ex and Dishonored, that forefronts player agency and abhors, well, the designer.

In the opening hours of Enderal, by contrast, the camera is thrown every which way. It’s knocked out of your hands as your character is thrown to the ground, picked up again and hurled from a ship into the sea. It’s splattered with your best friend’s blood, in a scene framed diagonally to unsettling effect.

And then there are the dreams. It “all begins with the dreams”, as a mysterious veiled woman tells you, and doesn’t stop there. You’re subjected to disembodied flashes of underwater ruins; strange stone figures, suspended in death like the victims at Pompeii; a bloodied stag on a living room carpet. The camera, and your eyes, are a window modders SureAI will shove whatever they like through to make their point. Effectively, it turns out. 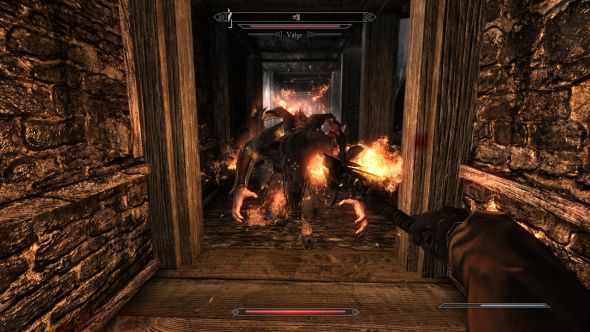 Expectations were not high, for a mod translated from German, with vocal talents lent largely by amateur actors. And there’s no telling how those lines might wear on us with repetition, just as the arrow to the knee did in vanilla Skyrim. But gosh: it’s quite good so far.

Not just the conversation, which is lengthy, but the barks of bandits and wild mages, the worried mumblings of citizens in the city of Ark, and the ambient singing that soundtracks the villages. The sheer volume of stuff recorded here justifies a download size that outstrips the original game by a couple of gigabytes, and more than matches Fallout 4’s Far Harbor DLC for consistency.

Why ‘largely amateur’ actors? Dave Fennoy – Lee off of The Walking Dead – is in there somewhere. No, I haven’t met him yet. Enderal’s a big place. 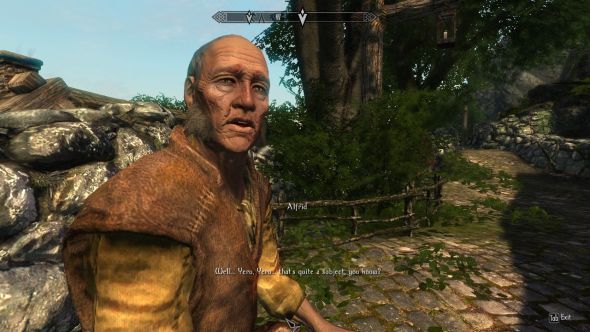 Bethesda’s cack-handedness when faced with a word processor is often overstated, but at worst their writing can lack the nuance offered elsewhere in Skyrim’s systems.

SureAI reckon the story and characters of Enderal “both surpass those in recent Elder Scrolls games”. And if that strikes you as hubris, know they’ve weaved an intriguing backstory about just that: hubristic wizards who declared themselves gods, and who left a vacuum of power in which chaos blossomed.

With the exception of the occasional wonky adjective, the translation work is flawless – such that the slightly flowery prose can be enjoyed in itself. Earlier today I was sat on a bench at the base of a mountain with an old man whose best friend grew up to set a lot of people on fire. And I was riveted, even as a dog’s AI told it to run back and forth up the same path in my peripheral vision, over and over.

Three things Enderal doesn’t do so well as Skyrim 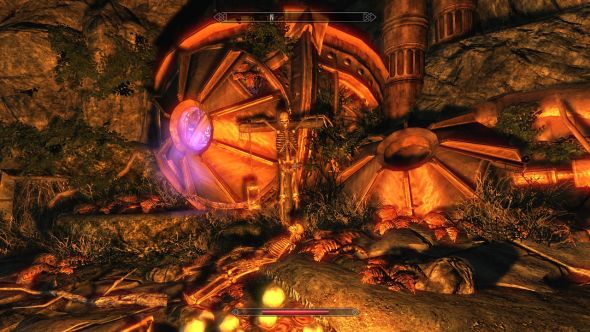 And by dungeons, I mean really everything dungeons have evolved into since the early days of D&D: cave complexes, abandoned inns, ruined temples and the like. Over the years, the iterations and missteps, Bethesda have developed a singular expertise and toolset for modular level design. And they use it best, squeezing an extraordinary amount of variety out of a limited box of portcullises, rickety walkways and burning torches. Often their object placement tells little stories about doomed adventurers and ancient dwarven civilizations.

There’s not much of that going around in Enderal. There’s a history to its lore, told in books and by the people around you, but the brand of violent archaeology that makes each den of enemies unique remains particular to Bethesda. 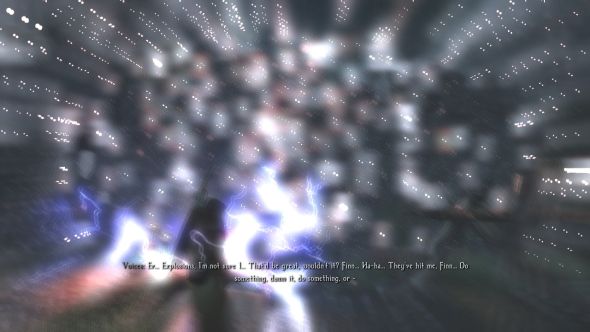 This is something common to modding, which so often succumbs to the allure of making things sharper, brighter, more vibrant, art direction be damned. Enderal avoids the worst sins (SureAI have been doing this since Morrowind, after all) and even the fuzziness in its depth of field is fine. But the lighting sometimes betrays a fondness for ‘early evening’ sun glare – the same weakness that made sunglasses essential for journeys through Fable II’s Albion.

There’s a lack of restraint, too, in writing which does its best to lock you into paths it’s convinced you’re going to love. You might well love those quests – but Skyrim has led us to expect storytelling that always bows to the simulation, even when the player decides to derail a carefully crafted plotline. Enderal, we’re told at its beginning, is “the story of someone who wanted to be free”. You might find that’s you. 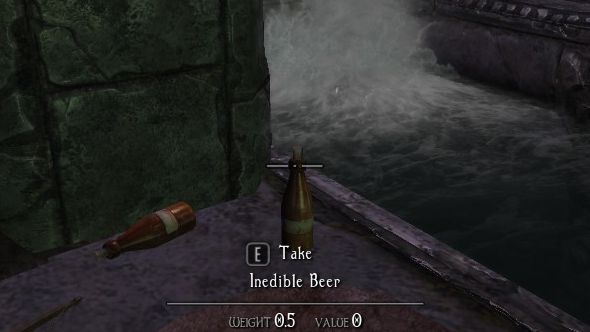