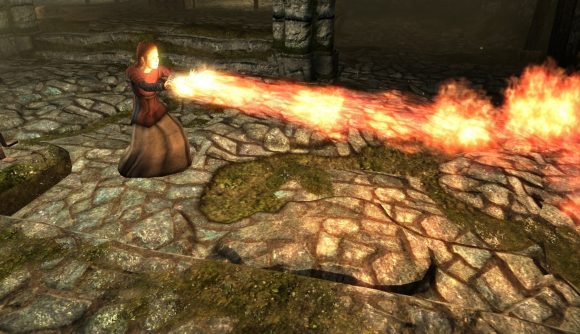 When it was recently revealed that you won’t be able to attack kids in upcoming dystopian RPG Cyberpunk 2077, some people were quick to suggest that one day a mod might arrive to get around this, à la the Immersive Children mod for Skyrim. However, it looks like one creator is looking to try a different approach and get the kids of Skyrim fighting back. A Skyrim mod now lets you play as children – with the Dragonborn’s ability to shoot fire spells from their hands, and everything.

The Race mod 1.1 by creator KaitiSans at Nexus Mods “adds children as a playable race” to the game, and “so far the playable children races are the Nords, Imperials, and the Bretons.” Plus, based on comments by the creator on the mod’s page, you’ll also get to choose whether to play as a girl or a boy.

Donning armour, wielding some incredibly heavy weapons, and venturing out to tackle the fire- and frost-breathing dragons of Skyrim don’t exactly sound like suitable activities for a little ‘un, but judging by the mod’s pictures, it looks like the Dovah-kids can more than handle themselves. One image shows a female child Dragonborn blasting what looks like the flames destruction spell out of her hands. That would surely leave a few bandits running scared.

If you’re keen to try out the mod for yourself, head over to Nexus Mods to download it. The mod also includes “the subspecies of the khajiit – the Ohmes-raht” to your game as a playable race option.

It looks like Grelod the Kind isn’t the only one who’s going to have to watch her back from errant younglings from now on.