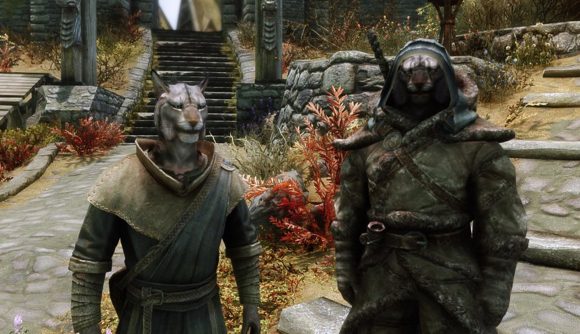 The developers of an upcoming multiplayer Skyrim mod have apologised over accusations that they used another modding team’s code without permission or attribution. In an update posted yesterday, the developers of Skyrim Together apologised to the team behind Skyrim Script Extender over “the use of protected code.”

Last week, one of the developers of Skyrim Script Extender (SKSE) – which is used to enable custom script threads and therefore more complicated mods – posted on Reddit. In that post, they said that the Skyrim Together teams was using “SKSE code, uncredited, without permission, with an explicit term in the license restricting one of the authors from having anything to do with the code.” They presented a number of comparisons between the two projects to back up their claim, and noted that the team was bringing in tens of thousands of dollars via their Patreon.

In response, Skyrim Together’s developers said that they have “taken our time to thoroughly investigate what was going on.” They acknowledged that old SKSE code had been used, and say that they have now “removed any and all dependencies, associated content, or related code per [SKSE’s] request,” and will be “reconstructing anything that was made possible by the use of SKSE code.”

Over a year ago, a representative of the Skyrim Together team had previously said that “we aren’t using SKSE at all,” but subsequent posts on the mod’s subreddit said that “there might be leftover code from [SKSE] in there that was overlooked when we removed it,” and offered an apology “for not having removed all of their code from our code.”

The SKSE code in question had been under common copyright law, which might have granted Skyrim Together’s developers the right to use it. However, in the early days of the mod’s development, when it was still under the name Skyrim Online, lead developer Yamashi was reverse-engineering SKSE code to help build the mod. When I spoke to a representative from the development team, they told me that they considered that to be “legacy code grandfathered from the original project which has gone untouched or carried over.”

The relationship between Yamashi – who is the only remaining member of the Skyrim Online team – and SKSE eventually soured, due to what SKSE referred to as “continued intentional copyright infringement and total disrespect for modder etiquette.” As a result, the mod’s terms of service were updated to say that “the Skyrim Online team is explicitly disallowed from using any of these files for any purpose.” In a conversation with a former Skyrim Together developer, I was shown screenshots of a conversation they claim were from the team’s Discord. Those suggest that in 2016, Yamashi was aware of SKSE’s stipulation, but said that it was “too bad we renamed the project.” In the wake of the recent accusations, a representative from the team says that they now have “no problem with obeying” instructions over use of the code.

Skyrim Together now say that they “believe [the SKSE team] is happy with the actions we are taking,” but it’s worth pointing out that the project is already something of a special case. The team behind it claim that it will eventually be free, but until now the only way to access it has been by paying into the aforementioned Patreon. The team has managed to dodge Bethesda’s rules about paid mods thanks in part to Patreon’s donation system, the fact that this is a closed beta rather than a finished product, and their decision not to use the Skyrim creation kit.

Read more: These are the best Skyrim mods

Nevertheless, there’s still a lot of money now floating around the mod. The developers say that it’s “not being touched or utilised by any member of staff,” with the exception of server costs, and that all developers have signed up to the project on a volunteer basis. It’s not clear what will happen to the money after release – Patreon earnings have dropped significantly over the past week, but at the time of writing are still worth over $25,000 a month.

After several years of development, the mod, which allows up to eight players to enjoy Bethesda’s fantasy RPG at the same time, seems to be nearing its finish line. A recent closed beta granted public access to it for the first time, with access limited to those who had contributed to the developer’s Patreon.