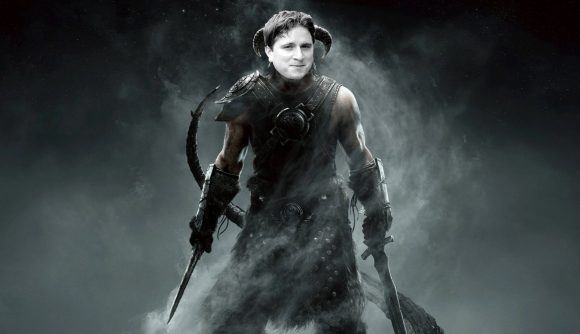 Usually when we write about Skyrim mods, it’s because we found something neat to add to the single-player experience – reworked spells, improved visuals, Sekiro-style combat, stuff like that. This mod is a bit different: it makes streaming Skyrim a more interactive experience for viewers, giving them the ability to spawn in enemies, give the player items, and alter the weather in the game.

Bethesda Twitch Integration currently works with Skyrim Legendary Edition and Fallout 4, with support for the Skyrim Special Edition in the works. Essentially it’s a Twitch chat bot that takes Twitch viewers’ commands and calls them into the game as they watch. It’s completely customisable, and you can set it up to work with the Twitch channel points system. For example, you could set it up so that viewers can spawn a chicken for 100 points – stuff like that.

While you can download Bethesda Twitch Integration through mod manager, as you might expect, there’s some setup to be done before you head to Twitch to have your viewers pelt you with cabbages. First, you’ll need the appropriate script extender and Java 8.

After that, it’s a matter of designing the commands you want your viewers to be able to use. Fortunately, there’s a handy GitLab wiki available that will guide you through the setup process and can introduce you to the format for adding commands.

There are custom commands for your mods to use, and you can draw on content from the Dawnguard, Hearthfire, and Dragonborn DLCs. It’s not just adding cabbages and chickens to the game, either – if you want, you can allow your viewers to spawn enemies, too.

Just be careful about how much power you decide to give your audience – they’re almost certain to abuse it. But that’s the fun with stuff like this, isn’t it?