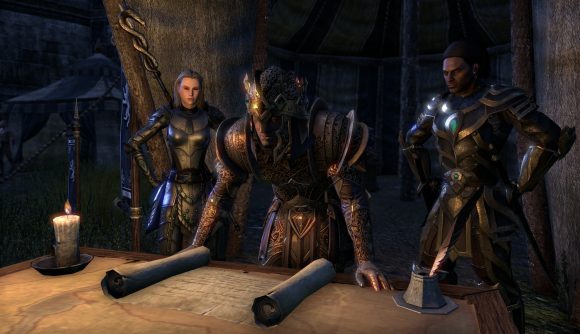 A curious trademark listing appeared earlier this week, with Bethesda parent ZeniMax registering the title ‘Redfall’ for a videogame and associated media. This could be related to any title under the company’s purview, including everything from Dishonored and Prey to The Evil Within, but Elder Scrolls fans are speculating this might have something to do with the upcoming sixth game in the series.

Redfall was registered by ZeniMax on September 10, and our only clues beyond the name come from how the company’s previous trademarks have been handled. Game titles and subtitles are typically registered separately – for example, ‘The Elder Scrolls,’ ‘Morrowind,’ ‘Oblivion,’ and ‘Skyrim’ are all separate trademarks.

The same rule applies to expansions, so this could be a new addition to a game like Fallout 76 or The Elder Scrolls Online. But it’s worth noting that the last ESO expansion, Summerset, was trademarked the same day it was announced – if that pattern holds, it’s unlikely that Redfall will be in that category. It’s also worth noting that no id Software properties appear among ZeniMax’s trademarks, so it’s unlikely this is related to Doom or Wolfenstein.

The Redfall trademark was dug up by the folks on the Elder Scrolls subreddit, and they’ve got a number of theories on how this relates to TES6. The locales depicted in the teaser trailer show the kind of mountainous, coastal terrain that’s mostly in the north-west of the Elder Scrolls map. That puts it around locations like the city of Daggerfall and the country of Hammerfell – which also happens to be the home of the Redguard race.

You can find all sorts of fun ways to mangle those names into ‘Redfall,’ and given the series’ love of compound words it could certainly fit, whether as a name for the region following some political event, the title of a war, or some magical plague or other. It’s pure speculation at this point, and we’re just adding fuel to the fire – but with the Elder Scrolls 6 release date potentially half-a-decade away, there’s a lot of time to fill as we try to figure out what Redfall means.