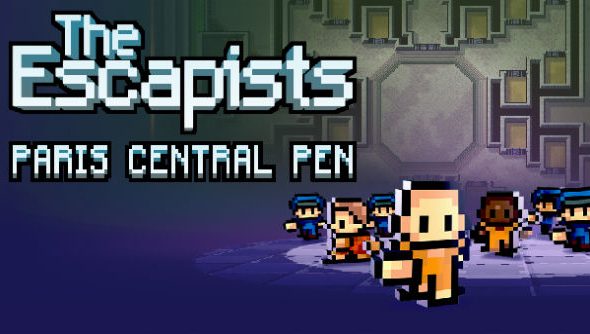 Mouldy Toof Studios and Team17’s The Escapists has never been one to shy from new DLC. The latest map – Paris Central Pen, as it’s known – is free and serves to celebrate the game’s first birthday.

Don’t do crime, kids. Also, keep your eyes off our list of best adult games for PC.

So, The Escapists has tackled The Walking Dead, Alcatraz, James Bond in Duct Tapes are Forever, Fhurst Peak Correctional, the A-Team in Escape Team, and jolly old Saint Nick in Santa’s Sweatshop. Am I missing any?

Now, Paris Central Pen looks to put an Escapists slant on the infamous La Santé Prison – situated in the French capital and famous for poor conditions, although set to reopen in 2019 – that’s housed famous crooks such as Carlos the Jackal, Jean Genet and Jacques Mesrine over the years.

According to Wikipedia, the latter even managed to escape in 1978, however one Michel Vaujour also broke free via a helicopter piloted by wife in 1986. That’s pretty badass.

Paris Central Pen probably won’t have helicopters (it might, I don’t know), but it will be free and will release on February 16 via a Steam update next week.