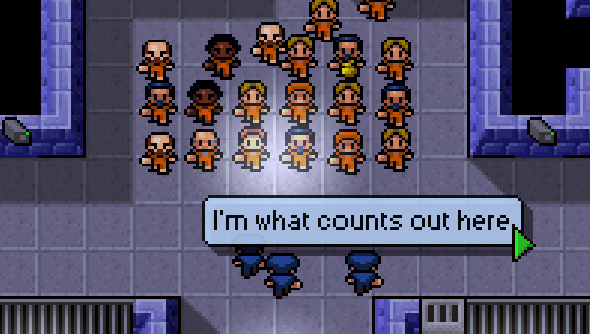 Prisons! Depending on which TV programme you watch, they’re wonderful places filled with fascinating people, each with their own plot arc and back-story you can learn about over the course of their sentence or “season”. Who doesn’t love a good prison?

The Escapists is a game about escaping from these delightful places, whether that be by tunneling out with a spoon, cutting through a wire fence, slithering around inside vents or walking out the front door while nobody’s looking. It’s an Early Access game in development by the revoltingly named Moudly Toof, as well as Team 17, the folks behind Worms.

I’ve been playing it, and it’s good! Here are some thoughts.

You win at The Escapists by escaping from the prison, which you do by running off the edge of the map to the pixelated void of freedom that exists beyond. Preventing you from doing this are all of the bothersome walls and locked doors and fences and guards who expect you to be in certain areas of the prison at certain times, doing prisoner things.

There are strict schedules to keep to over the course of the day. Typically you’ll begin by attending the morning roll call before heading to the cafeteria for breakfast. Depending on the security level of the prison in which you’ve been incarcerated, you’ll be granted an hour or two of free time per day between scheduled activities such as exercise, showering and working in one a number of different occupations. 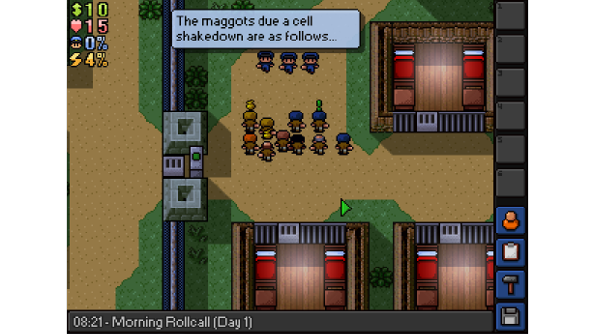 You’ve got total freedom of movement at all times however. Well, as much as an inmate could reasonably expect. You can slink out of the gym during exercise period if there’s somewhere you’d rather be, though being spotted anywhere that you shouldn’t will raise suspicion and, if you attract to much attention, get you sent to the infirmary with a boshed up face. Sticking roughly to the prison’s routine is key to keeping a low profile while you plot your escape.

And you actually do plot your escape. The Escapists is a proper sandbox, there are no pre-designed routes for you to tunnel through or hand-scripted objectives for you to meet. Instead you’re finding weak spots in the prison’s security, all while collecting items by trading with other prisoners, stealing from their desks or swiping them from around the prison as you go about your prescribed activites.

Crafting allows you to combine items into more useful tools. Combine two files with duct tape and you’ll fashion a makeshift shears, capable of snipping through ventilation shafts and wire fences. Combine a sheet and two pillows and you’ll have a convincing decoy to replace you in bed while you scoot about in the vents. Your tunnels and holes have to be properly concealed by posters or papier maché vent covers too. If a guard stumbles upon your handiwork, your progress will be reset and you’ll spend a few lonely days in solitary. 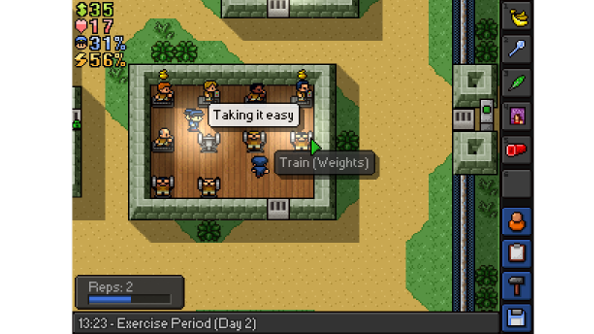 Here’s how I made my first prison break. I started by pilfering plastic knives from the cafeteria during breakfast time, pocketing them until the afternoon when my shift in the metalworking room began. Over the course of the few days I’d spent in the prison, I’d noticed that guards never enter this workshop, meaning I could use the knives to prise open the ceiling’s ventilation cover and enter the ducts above. This took days: there’s a fatigue meter that limits the amount of strenuous work you can do at a given time, and those plastic knives break easily.

Scooting about inside the ducts like a big human-sized rat, I could eventually reach the vent cover above my cell. Before I could remove this cover however, I’d had to fashion a fake replacement, as the cells are all routinely searched by guards. So, combining glue I’d stolen from another prisoner’s desk with the readily available toilet paper, I crafted a new vent cover from papier maché, one that I could remove at will. Guards aren’t very observant.

Now I had free access to the metalshop from my cell and a place to store my contraband goods. Contraband, things like files and duct tape and shovels, can be discovered by guards if kept in your cell desk or on your person, and contraband detectors throughout the prison will sound the alarm if you stroll through them holding something you shouldn’t. Finding a decent hiding place for your loot is essential. Other prisoners can dob you in too if they spot you, depending on your reputation within the prison, so stashing your valuables somewhere out of the way is recommended. 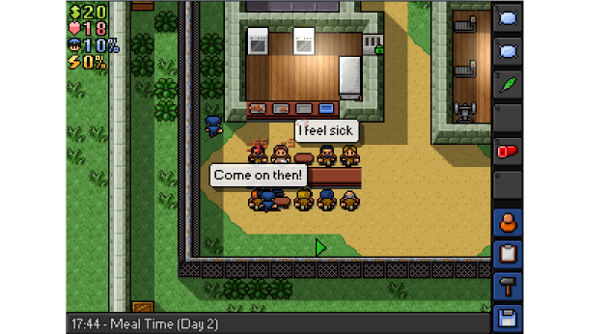 The metalshop provided me with the metal sheets needed to craft a shovel, while the additional timber and files to upgrade it could be found by bartering with other inmates over the course of a couple of days. Once I’d McGuyver’d myself a shovel, it was a matter of stringing together a rope from a couple of bedsheets and sticking a decoy in my bed while I made my way to the rooftop through the vents. With the roof unguarded during the night, I could climb down the side of the prison’s outer wall, march up to the fence and burrow my way to freedom.

There are plenty of other ways of escaping that particular prison. Currently the record stands at around two minutes and involves throwing molten hot chocolate in a guard’s face, swiping his keys and walking out the door. Other prisons are more challenging however, introducing inner and outer fences, solid perimeter walls patrolled by jeeps day and night, guard towers with snipers and stricter schedules that leave you more fatigued and with less time to wander.

All of these increasingly complex prisons demand more elaborate escape plans, with longer tunnels that require wooden braces to prevent them collapsing. If a single guard spots your engineering project, the entire thing is filled in, your tools confiscated and your progress reset to zero. Punishment is, well, punishing. 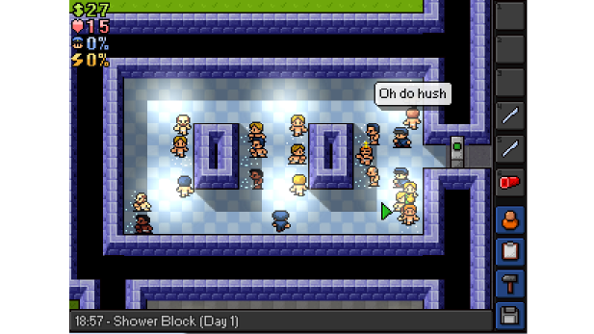 The usual caveats are in attendance: The Escapists is still very Early Access-y in places. As of the current version there’s no real reason to play the game aggressively, for example, by bulking up your character in the gym and crafting weapons to beat down other inmates and guards. Instead it’s better to fawn over other inmates, showering them in gifts to convince them to stop attacking you long enough that you can escape.

Crafting is a little wonky too. You can find crafting notes, which reveal random recipes you can use to create new items, but anything can be crafted at any time as long as you have the correct parts. To know how to create some essential items early on, you must refer to an external wiki page that’s catalogued all the craftables in the game – a secret the game cruelly keeps to itself.

Otherwise, The Escapists is an interesting prison breakout sim, even at this stage of development, with more than enough potential tied up in its handful of prisons to be worth a shot. Updates are regular and problems are remedied almost as quickly as they’re diagnosed.

It’s currently 33% off on Steam too, which is nice.

Verdict: Sure, go for it, why not