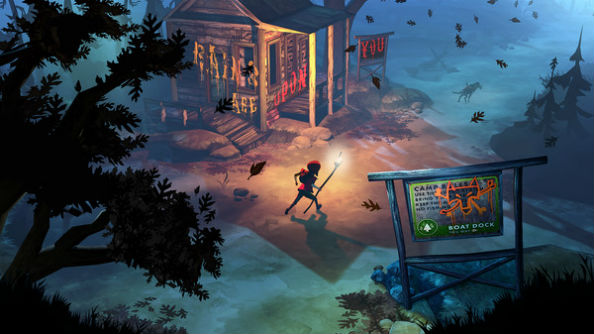 Made by a team of ex-Irrational, Bungie and Harmonix employees, rogue-lite survival adventure The Flame in the Flood is a lovely-looking game that’s leaving Early Access next week. To mark the occasion, developers The Molasses Flood have released a couple of trailers that demonstrate what’s required to make it in the wild.

Want to know more about The Flame in the Flood? Here’s Jeremy’s Making it in Unreal entry.

Although billed by The Molasses Flood as “a rogue-lite river journey through the backwaters of a forgotten post-societal America”, which I suppose it is, it’s also a game about logic and making informed and logical decisions.

Out in the wild, ravens, for example, attract wolves and wolves will kill you. It’s handy to know, then, that wolves fear fire and that sparking a torch tends to send them running in the complete opposite direction. But snakes – who’ll also kill you, obviously – are attracted to fire.

Survival is hinged upon how well you juggle all of this and more, and if you don’t, well, the end of this video paints a pretty clear picture as to how things might turn out:

Likewise, deciding on which traps to use, how to use them and when to use them has a significant bearing (pardon the pun) on besting the wilderness. Do you capture a rabbit to appease your rumbling stomach? Or do you use it to lure a wolf to its demise and live another day? Your call.

The Flame in the Flood lives on Early Access at the moment, but will be released into the wild on February 24.