Update: Speculation’s over and everything’s back to normal – here’s all the trailers and announcements from The Game Awards 2016.

Just waking up? Can’t remember last night? Still angry about timezones? Whatever the reason you skipped The Game Awards, we’ve got all the trailers and announcements laid out down below, along with links to our coverage of each for more info.

For everything Mass Effect: Andromeda, we’ve got a dedicated post.

Five minutes of Ryder action on a desert planet. Plenty of nasty fauna to contend with.

Arkane’s next immersive sim is more shadow aliens than assassins, plus glue gun. What’s shown above wasn’t what was at the show, but is an extended version of it.

Something new, from a Bioware / Blizzard / Riot / Capcom cross-breed studio called Phoenix Labs. In that same fashion, it looks to mix Monster Hunter, Dark Souls and World of Warcraft into … something.

A look at Halo Wars 2’s biggest bad guy, Atriox. He really, really doesn’t like anyone. A remaster of the original game was also announced.

Telltale’s Guardians of the Galaxy

Hope you didn’t blink. Not a lot from Telltale about their next series as of yet, but expect to hear more next year. Telltale also had some more significant news on The Walking Dead Season 3.

A little more dubstep loving for Lawbreakers, though no major new announcement.

As expected, Bulletstorm is coming around again. Sadly not a sequel, but at least you can play as Duke. If you want to. For some reason.

A new, extra-sci-fi Rocket League arena is on the way. In space. SPACE!

And finallynot coming to PC but we’re including it anyway because you probably want to see it:

Zelda: Breath of the Wind

Baby game for babies though, isn’t it? No, we’re not mad Nintendo have never released a game on PC, you’re mad.

We’ll see you next year, Geoff.

Original story:The Game Awards is tonight, Geoff Keighley’s yearly gathering of lovely statues and game trailers into one glorious whole. It’s always a hot bed of announcements for what we’ll see pre-E3. So far, a few games and studios are confirmed to be showing up – here’s a complete list, plus a little speculation.

All in all, well-regarded rumour from the usual suspects puts the total number of “world premieres” at TGA this year at ten. In the past that’s included brand new games like No Man’s Sky as well as first gameplay trailers for stuff that’s already announced. In what has been quite a leaky year, we’ve got quite a good idea of what’s coming.

Gearbox founder Randy Pitchford posted on Twitter saying that they had something to announce on December 1st a Duke fan would “really enjoy”:

@Alex_Everatt On December 1st, we are announcing something you might really enjoy 🙂

In the replies to that post, a fan asked specifically about more Duke on the way, to which St. Jon replied “Uh huh.” Five years out from the release of Duke Nukem Forever, and with legal issues surrounding it mostly cleared up or buried deep in bureaucracy, it would be about the right time for another ride. Hopefully, well, it’s a lot better than last time.

Interestingly, rumour had it that Bulletstorm was on the cards as well. A couple of months back the Brazilian ratings board pulled their old trick of accidentally announcing HD remasters withBulletstorm: Full Clip Edition, tied to Gearbox as publisher. It’s possible both will be making their debut.

Most recently, Keighley himself took to Twitter to announce “the worldwide debut” of new gameplay from Prey, the scary sci-fi shooter by Dishonored devs Arkane:

So this is a lock, and gameplay footage is particularly welcome as there are still plenty of gaps in our understanding of Prey’s action. We know it leans more toward survival horror than many shooters and that you’ll be able to upgrade yourself to use alien powers, but we’ve had precious few gimpses of this so far. For more information, here’s everything we know about Prey.

This one’s rather easier to predict – the Mass Effect social media accounts have been teasing a new trailer at The Game Awards for a couple of weeks, including just straight saying it:

On December 1, you'll get a first look at Mass Effect: Andromeda gameplay at @thegameawards. pic.twitter.com/w8i4CKpvjX

Given we’re getting closer to that delayed Q1 release date, and the amount we’ve seen of the game so far boils down to tech demos for new console upgrades and screenshots, a proper showing of what you get up to moment to moment in Andromeda would be appreciated. Please?

Telltale’s The Walking Dead (and Guardians of the Galaxy)

Telltale love The Game Awards, showing up last year to tease their currently-ongoing Batman series and letting TGA’s twitter account reveal they’ll be at this year’s show too:

The next version of their most popular property confirmed, what might Telltale show up with as a ‘surprise’? Well thanks to leaks from the voice actors guild during their strike action, Telltale’s Guardians of the Galaxy looks a good bet. Don’t expect much more than a teaser though. 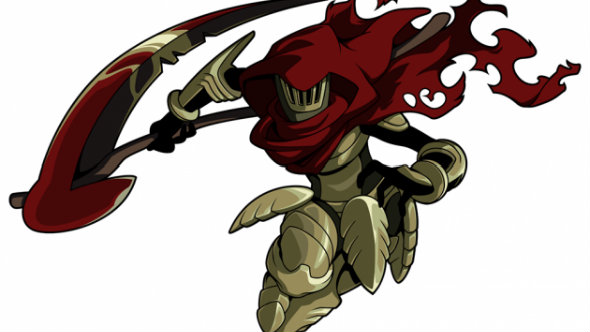 Yacht Club Games, developers of Shovel Knight, are down to attend The Game Awards to show something off, with many expecting the Specter Knight to show up. We don’t really know what they’re planning though – only that they are planning something, thanks to this Facebook post. “Want to see the latest on what we’ve been making here at Yacht Club Games?” the post asks. “Watch The Game Awards and reap what we sow.” It’s that last line, with the reaping and sowing, that is causing people to assume it’ll be the Specter Knight. Seems like a pretty solid bet.

Boss Key Productions are attending The Game Awards and they’re promising some kind of LawBreakers announcement. Perhaps a beta date? A new gameplay trailer? Could be anything, really. All we have is this announcement post. Boss Key promise “some killer reveals” which may or may not be sick and rad.

We are proud to announce that we will be revealing our debut title at @thegameawards tonight.
Tune in at 530 PST. pic.twitter.com/IJHI5JDMXE

Phoenix Labs, a studio made up of veterans fromBioWare, Riot Games, Capcom and Blizzard, are to show off their debut game.

Beyond that, it’s more of a crapshoot. Keighley’s good at keeping at least one big reveal unshown, like with No Man’s Sky three years ago. There are also console-only games – most notably The Legend of Zelda: Breath of the Wild – and the Assassin’s Creed movie confirmed. We’d be surprised if BioWare’s blowout isn’t the main event – but maybe FF7HD? Kojima’s also on-site to collect an award, so Death’s Stranding might crawl out of the interdimensional portal with some more babes in arms.

Let us know in the comments what you’re hoping to see a bit more of before we close out the year, and more info on the Game Awards is over on the official site.