Update, May 2: With barely two days left to go, The Good Life has met its funding goal on Kickstarter.

After some sketchy going early on, The Good Life is now fully funded on Kickstarter, with little time to spare. Just over 10,000 backers have finally pledged enough to meet the ¥68,000,000 goal, with only 54 hours remaining in the campaign. Nothing’s guaranteed until the campaign closes, but it looks promising for the project.

Things weren’t looking good a week ago, when the project was sitting at barely half of its goal. Conventional wisdom suggests that Kickstarters fully fund early on or never even get close, but the late release of a playable demo seems to have reversed fortunes for Swery and the team at White Owls.

The roughly $620,000 pledged to the game so far could fluctuate down a bit before we reach the end of the Kickstarter if any number of backers decide to cancel their pledges, but for now it seems the small town adventure game is set to clear the bar. The game failed on Fig with a $1.5 million goal last year, and additional funding from other partners is set to cover roughly 60% of development costs.

Update, March 26:The Good Life is back for another stab at crowdfunding, this time on Kickstarter.

After a rocky first attempt on Fig, director Swery and studio White Owls have taken to crowdfunding once more in an effort to bring their new project to life. The Good Life is back with a visual facelift and a whole lot more detail on what the team are trying to accomplish, this time on Kickstarter.

The Kickstarter is now live here. They’re asking for ¥68 million, or roughly $600k. That’s quite a bit less than the original Fig goal of $1.5 million, and the developers have sought outside investment to help see the game through.

They’re hoping to fund 40% of development through Kickstarter, with the remainder of development costs coming through other partners. One of those partners isUnties, a Sony-backed indie games labelwe first heard about last year.

This Kickstarter also provides a much more detailed look at the actual game content. We already knew we’d be playing a big city photojournalist out to solve a mysterious murder in a strange small town, but now we know much of the game will be about photographing Rainy Woods and selling those photos to earn more money – or using them to figure out the murder.

The money can either be spent on paying off your debt, getting new camera equipment, or enjoying some small town life with noble pastimes like tea and furniture collection. There are also alternate avenues for getting money, including cryptocurrency mining.

Both you and the town’s inhabitants mysterious turn into cats or dogs once a month, and this time there’s no split version of the game forcing you to choose which pet life to buy into. You pick an animal for your own transformations at the start, and you “may reach a point” where you can swap between them.

It’s also gotten a visual overhaul for a much more intricate look. It still has a simple, papercraft-like aesthetic, but that’s been filled out with significantly more detail for richer environments and characters. If all goes according to plan this time, The Good Life should be available November 2019.

Update, February 8, 2018:The Good Life will take a second run at crowdfunding with a Kickstarter campaign set to begin in March.

Despite missing their first crowdfunding target by a healthy margin, the team behind The Good Life are not to be dissuaded. The game’s director, Swery65, has confirmed that a Kickstarter campaign for the game will launch on March 26.

The Good Life is a murder-mystery set in the English countryside, in a mysterious village where all of the inhabitants turn into animals over night. It’s the next project from Swery, the creator of Deadly Premonition and D4: Darks Dreams Don’t Die.

Swery tweeted last night to confirm that, despite a failed campaign on crowdfunding site Fig last year, a second campaign would take place in the Spring. The team view the failed campaign as a “temporary setback,” and say they haven’t stopped working on the game since the first campaign failed.

Hello everyone. I have a good news for you guys.
We decided that we will relaunch of crowdfunding campaign of "The Good Life" on 26th March 2018 (PST).
See you AGAIN soon, and I love you all!!
SWERY#TheGoodLife #SweryNewGame pic.twitter.com/ANwfz7KNID

Swery puts some of the failure of the Fig campaign to the fact that this was the team’s first-ever kickstarter, and says they “learned a great deal.” He lists six changes that the team are working on “to ensure success,” including changes to reward content, the provision of gameplay footage, and an enhanced graphical style.

That tweet also contains messages from art director Noburo Hotta and creative director Yukio Futatsugi, re-iterating the message that the game has been refined over the past three months.

Original story, October 12, 2017:Swery’s always been a bit of an underdog making underdog games. His early titles were lost amid the PlayStation 2’s immense library, and even the cult favorite Deadly Premonition coasted on charm despite its lacking gameplay and technical issues. Now the Good Life is one more strange story for the Swery catalog – it won’t meet its Fig funding goal, but Swery promises it will still happen.

The Good Life will be hitting Kickstarter by the end of the year. The Fig campaign still has a few hours to go, but it seems unlikely that it’ll miraculously raise over a million dollars by the end of the day. In fact, it’s been clear for some time that the campaign wouldn’t make it, as it spent most of its duration at less than 20% funding. By the time the campaign’s chances of success had clearly hit zero, Swery began asking fans to make pledges – which, given the campaign’s state, they would not be charged for – to help show potential publishers the level of interest in the game.

Swery has managed to line up some partners, including Panzer Dragoon creator Yukio Futatsugi’s company Grounding, and others to be announced soon. The publishing help will see them hit Kickstarter with a lower funding goal, and Swery’s looking to correct the other issues he’s seen with the campaign. Those include poor communication after early leaks, bad explanations of the multiple versions, and an option for physical copies.

However it turns out, it’s already been a bit of a mess, but that’s something Swery is no stranger to. His last game, D4, was a weird and wild little thing which only saw two episodes of its planned story released before withering away on poor sales. Fans upset that they never saw a full conclusion haven’t been kind in light of Swery’s efforts to make the Good Life happen. 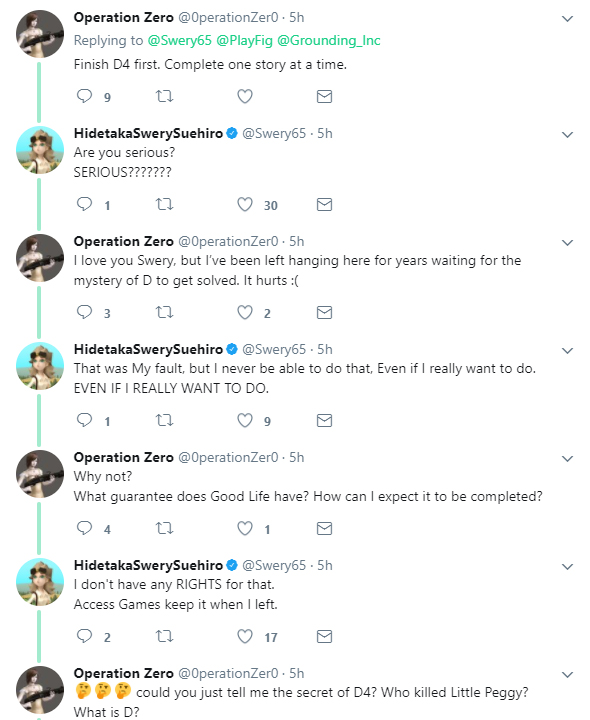 Guy, It's over to talk about D4.
Enoguh.
It's Over.
I have to Block you if you will continue this conbersation with me.

So everything’s terrible, basically. Hopefully Swery can bring his latest project to a fully-formed conclusion.