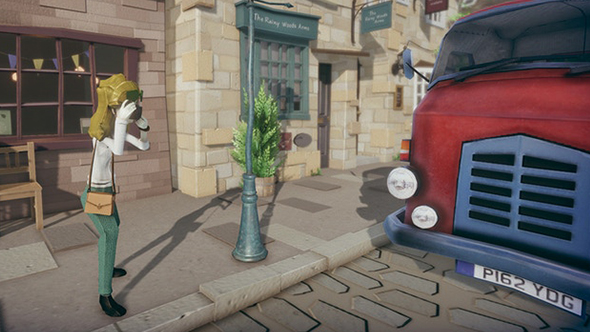 The first stroy – sorry, story – trailer for The Good Life has arrived. After director Swery’s upcoming project reached its kickstarter goal earlier this week, the video was posted on YouTube this afternoon.

If you too would like to be out in the boonies, The Good Life has a demo.

If you’ve been following the game up until now, the trailer doesn’t offer much that you didn’t already know. The game follows Naomi, a down-on-her-luck photographer from New York who moves to a tiny English village in order to pay off her debts. Once there, she discovers that the village’s inhabitants turn into animals at night (though I’m still not sure why) as well as uncovering a murder that she’ll need to solve before she can leave the village.

There’s a few more bits of information, as well as a slightly closer look at some of the gameplay than we’ve ever had before, but it’s still relatively limited. What we do learn is that Naomi can either be sent out to act as a human sheepdog, or be sent down’T pit to earn her much-needed money.

I must confess I enjoyed the trailer, but mostly for the moment in which Naomi declares “I’m out in the fucking boonies,” and decries the lack of burritos in her quaint English village, which I thought was very funny. You can watch the trailer at the top of this article (just ignore the typos), and at time of writing you still have eight hours to back the project on Kickstarter.