Look at just about any random screenshot of The Invincible, and you’ll see an image that looks pulled straight from the cover of a paperback science fiction novel. That’s no accident: developer Starward Industries is making a game to pay tribute to one of Poland’s most celebrated authors, Stanisław Lem, by bringing his novel of the same name to life.

The aesthetic is retrofuturistic, with puffy, upholstered space suits and dome-shaped robots walking on spindly metal legs. A scanning device has a green-on-black bubble screen that shows a vectorised version of the terrain ahead. Lem’s novel was written in 1964, and the future envisioned in The Invincible is the future people in the Cold War era imagined, heavily coloured by the Soviet-US space race.

Rather than drawing specifically from other visual references, technical director Daniel Betke says Lem’s writing served as the development team’s main source for artistic cues. “As obvious as this sounds, Lem’s book has played a huge influence on our project,” Betke says. “What’s great about him is that he is one heck of a wordsmith. When you read The Invincible, Lem really gets your imagination pumping.”

The ‘atompunk’ aesthetic on display in the videogame version of The Invincible is also heavily grounded in real-world designs of the time. 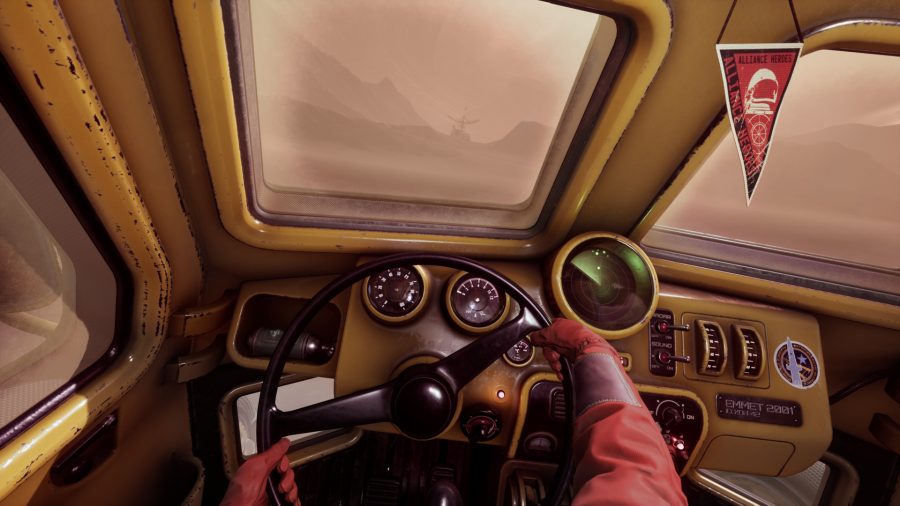 “We also researched and looked at real-life designs of spacesuits, spaceships, vehicles, tools, and more that were created by engineers in the Soviet Union during the Cold War,” Betke explains. “Some of their designs also had that distinct feel – the red space suit is a classic. Hopefully this mix, plus our own little flavour will be something that people will resonate with.”

When you read The Invincible, Lem gets your imagination pumping

To accomplish a hard sci-fi setting that’s visually distinct and realistic, Starward Industries’ team of about 20 developers turned to the Unreal Engine. While they have experience working on some of Poland’s biggest games – think The Witcher Series, Dying Light, and most recently Cyberpunk 2077 – the relatively small size of the team meant finding a toolset that was both powerful and versatile.

Betke says Unreal wound up being their choice early on thanks in a large part to two features: Blueprints and Materials. Using Unreal’s Blueprints system, Starward could quickly iterate on ideas for game systems. 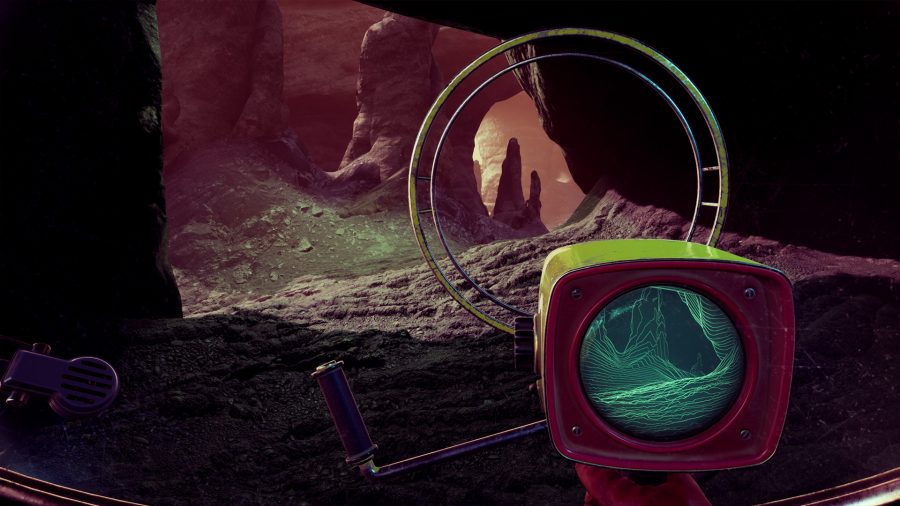 “It’s like a sketchbook that we can just take out and let our thoughts flow. It’s a fantastic tool,” he tells us.

Unreal’s Materials system, which includes full physics-based rendering to give surfaces their stone or metal appearances, was the other big factor. “It gave us a full flow of physical materials as well as lighting,” Betke says. “UE4’s Materials is something that we can’t praise highly enough. It’s such a godsend for graphic artists. It gives you so much choice and freedom in creating the right atmosphere and visual style. We love it.”

Once Starward had settled on the story and secured the rights to The Invincible from Lem’s estate, the studio set about the difficult task of deciding how to adapt a beloved novel into a modern videogame, giving players choices and surprises while staying true to the source material. 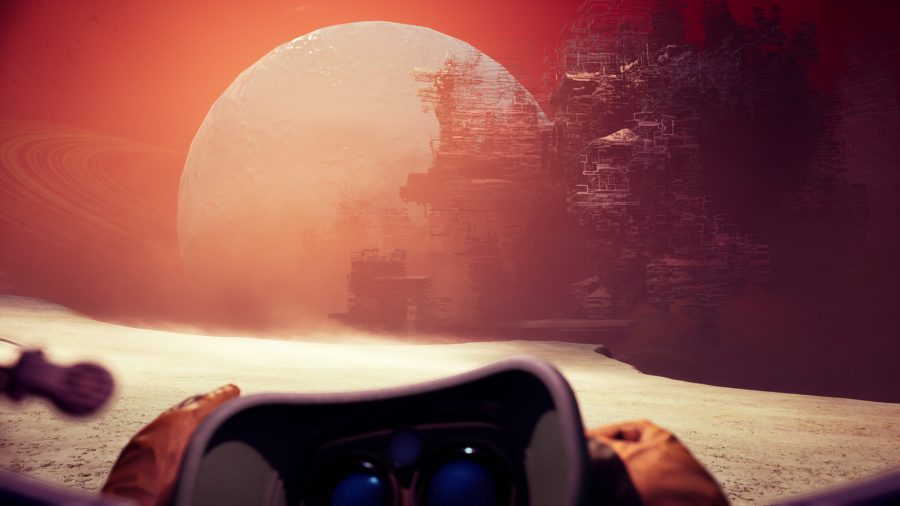 “One thing that we hope for is that fans of Lem will like what we did, and those that never read his books will use our game as a springboard to his wonderful world,” Betke says. Bringing that world to life meant animating it, which was a challenge – but Betke says Unreal’s Blueprints helped streamline that process.

“What’s really cool about Unreal Engine is that we were able to integrate our animations with UE4’s Blueprints,” he explains. “This gave us full control over the creating and management process – blending, combining, and mixing different animation trees, complex interactions, that sort of thing. It has made our lives so much easier and the workflow a lot smoother.”

Keeping track of everything that’s been done and still needs to be done is another huge task in any game’s development, and Betke says Unreal Editor helped the studio manage its workflow and production process in a single tool. 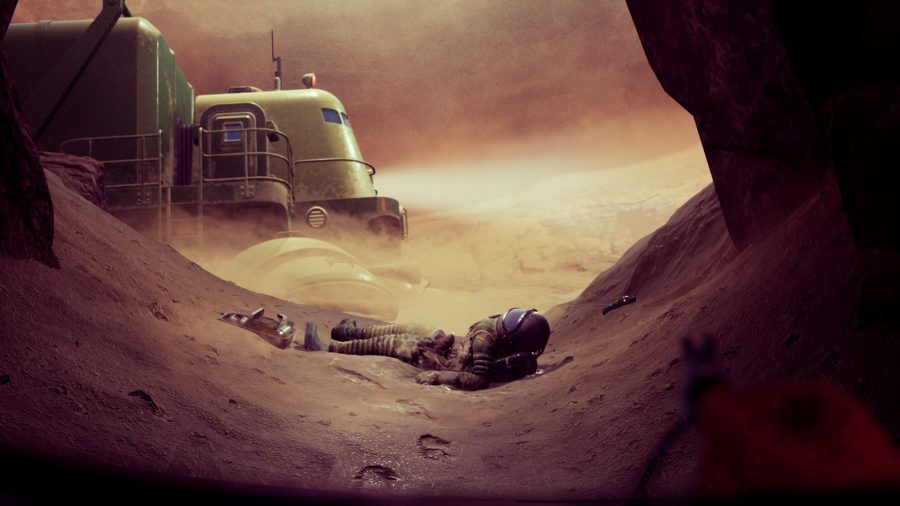 With those tools in place, what remained was to shepherd The Invincible from the pages of Lem’s iconic novel to the small screen. “The great thing about the original The Invincible is that Lem is pretty damn good at painting vivid images with his words,” Betke says. “Lem created a really visual experience in itself, which means he did all the hard work [for us]. We merely took what he did and just shaped his imagination inside the engine.”

Players will journey to the planet Regis III, a seemingly deserted wasteland, where they’ll have to traverse a forbidding landscape and interact with robots who may help you on your quest. It’s meant to be an immersive adventure, and you’ll be using distinctive retrofuturistic vehicles and gadgets to make your way through the alien world.

Read more: Here are the best space games on PC

“First and foremost, expect a really immersive story that we hope would make Lem smile and nod with approval,” Betke tells us. “That is our main goal here as a studio: give appreciation to the man we read as kids and inspired us to look beyond what’s now.”

In this sponsored series, we’re looking at how game developers are taking advantage of Unreal Engine 4 to create a new generation of PC games. With thanks to Starward Industries and Epic Games.