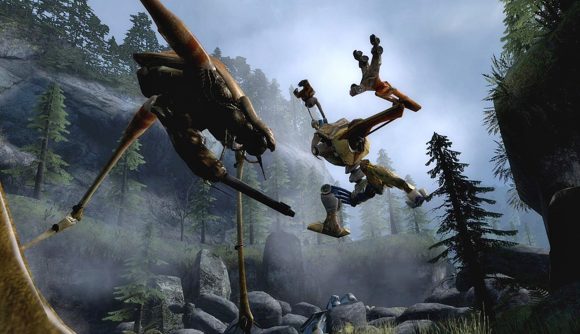 Valve’s work on a Half-Life VR title has been a topic of frequent reports, rumours, and speculation over the past year, though the company has been predictably tight-lipped about that potential Half-Life prequel. This week, Valve released an update to its VR title, The Lab, which appears to contain the source code to prototype for Half-Life in VR.

Datamined code from the update reveals a project called ‘Codename: Shooter,’ as Tyler McVicker details in a Valve News Network video. It appears to be a wave-based shooter set in a holographic version of City 17, where players would be challenged to take down Half-Life enemies like Striders and Combine soldiers while being teleported between various set piece locations and solving occasional puzzles to progress.

The code only contains references to a handful of levels, and given its seemingly random appearance in an unrelated game update, it’s likely that Valve has long since moved past the little bits that we’re seeing here.

Still, it’s an indication that someone at Valve has at least thought about Half-Life in recent years, and combined with all the existing Half-Life VR rumours, it’s a strong indicator that we’ll eventually see something on this front.

You can get more detail on everything the code contains in the video above.

The Lab’s new update is primarily intended to flesh out the way hand tracking and physics work. The official announcement makes no mention of a leaked Half-Life game, oddly enough.