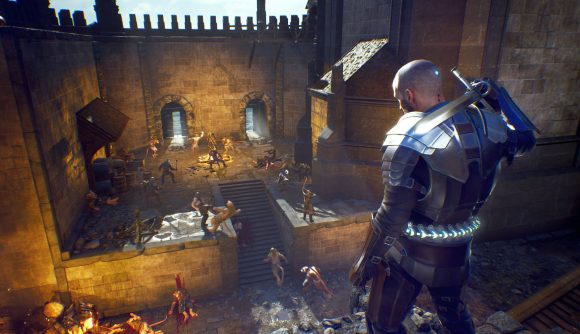 Koch Media’s brand-new publishing label Prime Matter and developer GoldKnights have just unveiled a new third-person action-RPG on the way next year at tonight’s Summer Game Fest extravaganza. The game will be a medieval-sci-fi mashup that looks set to appeal to Dark Souls and rat games fans alike.

The Last Oricru is, like any great RPG game, about choices and consequences at its core. Set in a fantasy medieval realm, the game sees the player character awaken from a kind of cryogenic sleep to find themselves in a strange world full of tough, unforgiving, and skill-based combat – both in the form of duels and mass brawls against groups of NPCs. It has six skill trees which you invest in by collecting essences from fallen foes, and along the way you’ll be making key decisions that affect the outcome of your tale. You can try to befriend them all in your playthrough – which probably won’t work out so well, GoldKnights says – or you can make enemies with all, which could very well be possible. And tricky. Gulp.

From the gameplay revealed, it looks like it’s got something Dark Souls-esque about its combat and tone in some ways, although it’s also got a distinctly sci-fi spin to it, too. It also has giant rat people, with giant rat tails and ears. You heard it here first, people.

The game will include both single-player and couch co-op, as well as handy hop-in, hop-out gameplay that’ll let you tackle its world with a buddy as and when you like. The Last Oricru is set to release sometime in 2022.