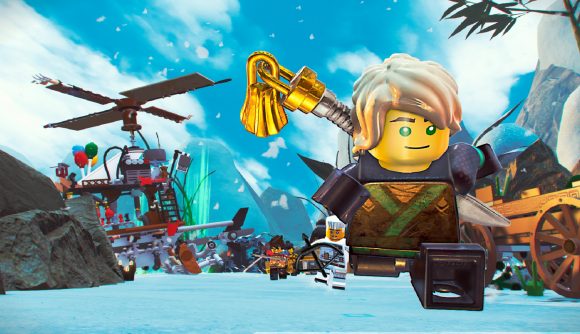 May 21, 2020 Today’s your last chance to grab the Lego Ninjago Movie for free on Steam. Original story follows.

Starting the weekend off with a freebie is always nice, and we’ve got some good news: the Lego Ninjago Movie Video Game is currently free to keep on Steam. Based on Lego’s popular Ninjago franchise, this adventure takes players through eight locations, dropping them into the roles of their favourite Ninjago characters.

Developer TT Games announced the giveaway on Twitter May 15, but didn’t offer any explanation. There’s apparently nothing in particular to be celebrating, but you can have a free Lego game anyway! That sounds like a pretty square deal, really.

Ninjago came along well after I was out of the Lego scene, so it’s a bit confusing: the world has a wide array of themes going on at the same time, and these include (naturally) ninjas and martial arts, high-tech vehicles and future cities, plus a villain named Lord Garmadon who leads something called the Shark Army.

In the game, you’re working to save the Ninjago island from an invasion by Garmadon, and to do that you’ll play as Lloyd, Jay, Kai, Cole, Zane, Nya, and Master Wu. There’s the normal Lego game business of searching for gold studs and exploring colourful sets, plus a few Ninjago-specific twists.

You’ll have to master the art of Ninjagility, for example, which gives your characters a Titanfall 2-esque wall-running ability, and your ninja skills can be improved and ranked up as you gain experience.

Good news! You can now download and enjoy The LEGO NINJAGO Movie Video Game for *FREE* right now on Xbox, PlayStation and PC until May 21! 🥳

In all, there are eight locations to explore throughout the game, and each has its own Challenge Dojo to complete. You can also compete against up to three other players in online play.

To pick up your copy, just head over to Steam and click ‘add to library.’ The Lego Ninjago Movie Video Game is free until May 21. There’s plenty more available, too – check out our list of the best free games on Steam.