It might not be E3 or Gamescom, but wander into a Glasgow bar on a particular Saturday night and there’s a small chance you’ll find the place transformed. The steady flow of alcohol, the crowds, the noise – they might all be familiar, but accompanied screens of all sizes, consoles, PCs and even the occasional game of Magic: The Gathering.

Your bar, you’ll discover, has been taken over by GlesGames, a regular gaming event that has, over the last year, built up a dedicated community of gamers with a hunger for local multiplayer. It’s a welcome reminder that outside of the bubble of the internet, with its comment threads full of drama and forums of agitators, gamers are – or at least can be – an inclusive, welcoming bunch.

A lot of games get made in Scotland. For a tiny nation of less than six million people, it’s had a vibrant developer scene for a long time. Rockstar North is based in Edinburgh, Crackdown 2’s Ruffian Games work away in Dundee, and Dovetail Games, makers of Train Simulator, have offices in Stirling. 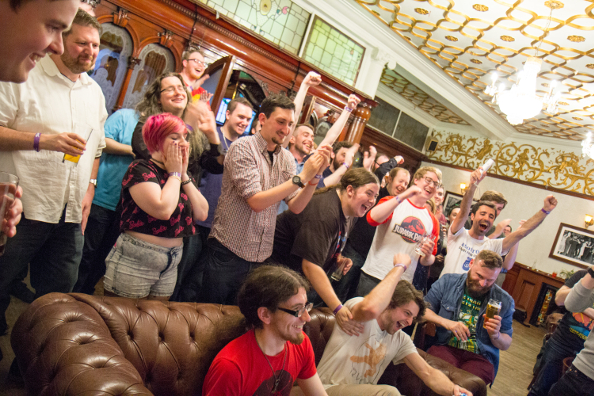 In contrast, for folk who want to play with others rather than create, there aren’t nearly as many outlets – though not for a lack of interest. It’s easy when you’re a kid: you grab your pals after school and head to one of their houses to plonk yourselves in front of the TV and smash the hell out of each other in Street Fighter or Mario Kart. The passing of time makes this much harder If you want to embark on an evening of local multiplayer once you hit your 30s you’re competing with spouses, new babies, work and a million other obligations.

“There was a big group of us that would talk on Twitter and things like that,” says Simon Marshall, who founded GlesGames in 2015. “We would meet up at a pub in Glasgow and I was like, ‘this is great I’m having an excellent time’, but there was one thing missing, which was videogames, the thing we all bonded over.

“So basically it started from there. The first event managed to attract like 35 people or something, which was more than I could have asked for, and then the second event, GlesGames 2.0, we completely packed out the bar and you could hardly move.”

GlesGames 2.0 was the first event I went to, and it was a bit like entering Narnia – but with the frost-speckled trees replaced by glowing monitors and cheering crowds of people watching friends and strangers climb up a mountain of scantily clad men with dongs that spun 360 degrees. I didn’t realise quite how much I missed regular local co-op until I was screaming at a screen as I attempted to race to the top of a pile of men in Mount Your Friends. 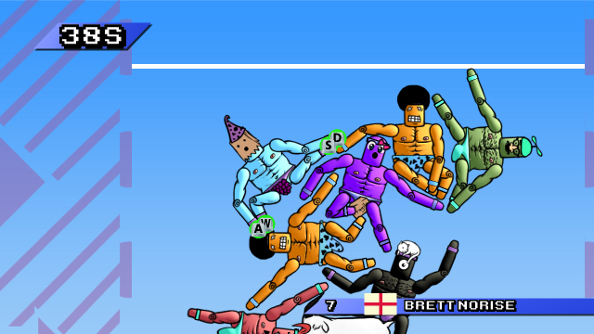 “It’s nostalgia,” says Marshall, “and those feelings you get when you’re playing against or alongside someone face-to-face are feelings that can’t be replicated online.”

At the last few events, PC local multiplayer has grown into a mainstay. The consoles remain popular, both retro and modern, but Steam’s vast library of games, particularly those of the indie persuasion, keep people gathered around the monitor. For Marshall, it’s a chance to finally get some use out of the games he ends up buying on Steam sales but then never touches, but for others, there’s an element of discovery, of finding new games that might quickly become favourites. It’s reminiscent of events like PAX or EGX, but without the expensive tickets, long lines and claustrophobic crowds. What remains is the chance to play something you’ve never even heard of before, or something you’ve desperately wanted to play but haven’t been able to find the people to enjoy it with.

“The indie scene is booming,” notes Marshall. “You’ve got games like Gang Beasts, Nidhogg, Towerfall Ascension, Mount Your Friends as well is a massive draw – these games all started off on the PC. Now some of them do end up on consoles, but the PC is such a wide and open library for you to access these local multiplayer games.” 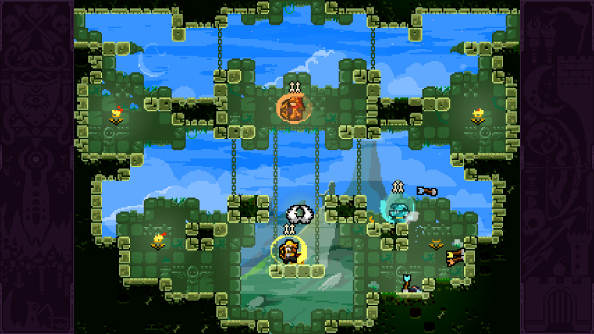 The chance to play a broad array of local multiplayer games is obviously the big reason people turn up to GlesGames, but it can be just as compelling to watch other people play.

In the era of Let’s Plays and Twitch streams, I sometimes find myself a bit lost. I used to merrily watch people play games for hours, in person, but there’s something missing when it’s online. At GlesGames, I’ve been remembering how fun it can be without that barrier. I gladly watch people duke it out in Rocket League or Street Fighter IV, flailing around when someone scores a seemingly impossible goal or makes a glorious comeback. I get caught up in the energy of the audience. It can be just as entertaining to watch as it is to play.

The spectacle of watching games goes beyond co-op and multiplayer titles. People will stand around watching someone play with the Oculus Rift, just because it’s a joy to witness their reactions. It’s simply fun to watch someone play something new. While VR is, at the moment, mostly focused on solo play, it’s still a good fit for an event like GlesGames, particularly now that most of us have realised we won’t be able to afford one when the consumer version launches later this year.

“I’m just eager for people to come and experience [the Oculus Rift] because it’s not really common for people to have experienced it,” Marshall explains. “People are like, ‘That sounds great but it’s £500,’ and people might not have attended EGX or whatever because we’re in Scotland. We don’t get to experience these sorts of things and it’s just lucky that through this event and the people I’ve been in contact with that I’ve been able to make that happen.” 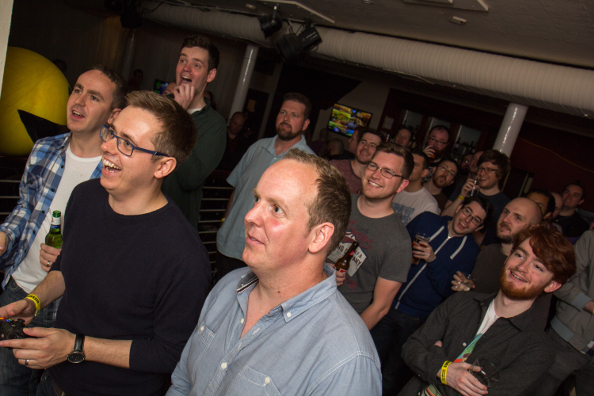 It’s also an opportunity for developers to show off their games in a more intimate setting than a gargantuan games expo. It’s all very low key. You might find yourself playing something that wasn’t on your radar, only to find that the reason was because it hadn’t yet been released, and the person you were playing it with it its creator. And developers have started to take notice. At the upcoming event this Saturday, Ruffian Games are bringing the latest build of Fragmental, for instance.

There’s a bewildering number of games across all platforms, but especially on PC, that have a strong local multiplayer focus, and there are hordes of people who want to play them. But for a lot of us, there just aren’t many opportunities. That’s what makes events like GlesGames special; important, even. People don’t just come from Glasgow and the surrounding areas; they come from all over Scotland, and even England and Ireland. That’s dedication. And it’s dedication shared by Marshall himself. He has a full-time job on top of running GlesGames, but with every event he somehow manages to pour more and more energy into it, from setting it all up and corralling people when there’s a tournament, to making sure that everyone’s have a great time.

“I know the joy I get out of games, and I want to see that in other people. People always ask me, ‘Do you not want to play some games? I would love to, but I’ve got a lot to organise! But I still get a great kick out of seeing people smile, laughing and joking over games which they may have played before or the wonder on people’s faces doing things they’ve never done before, whether that be games or something like the Oculus Rift.”

If you happen to be in or around Glasgow this weekend and fancy some local multiplayer action, get yourself along to Sloans near Glasgow Central and Queen Street Station this Saturday. Tickets are £7 and you can get them at the door or on Eventbrite. For more details you should follow GlesGames on Twitter or Facebook.