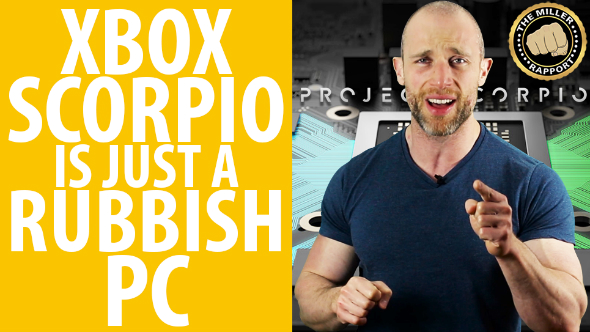 Yes, that is an egg pun. Sorry, Simon. I mean, you eat enough of a thing and you’re bound to turn into it, just like your mum said. If that goes the same for videogames, it’s no wonder Miller’s physique is straight out of Gears of War. Despite his love for Microsoft’s flagship third-person shooter series, as well as accruing power for the sake of it, he’s still not sold on the Xbox Scorpio. It’s just a PC for lazy people who skip leg, arm, chest, and back day, after all.

Hook up one of our best PC controllers list to your rig and you’ll be away.

You see, the thing is, Xbox Scorpio might be the most powerful console, but it’s just a rubbish, closed-off PC. Well, that’s what Simon says, and when someone called Simon says a thing, you know it’s fact. That’s why the game Simon Says exists. Plus, he’s bloody massive, so he could probably kill you.

What do you lot reckon? Would you be up for a 4K console, or would you rather just stick, in the famous word of Simon, to your nerd box?

If you’re enjoying The Miller Rapport and want to support Simon so he can make more premium-grade video content, you can contribute to hisPatreon. You can alsosubscribe to PCGamesN on YouTube, if you like. We make videos about games and never shout into our mics.