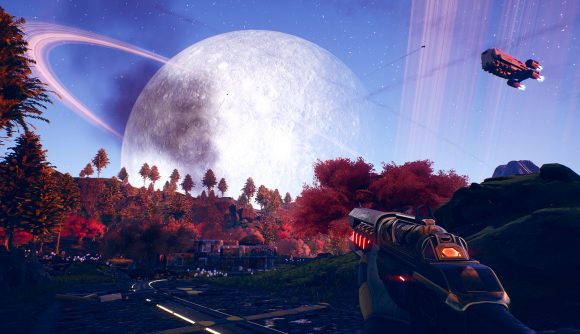 The Outer Worlds, the sci-fi RPG game from developer Obsidian Entertainment, is coming to Steam exactly one year after it was first released. Players who’ve been waiting for the space game to hit Valve’s storefront don’t need to be patient much longer, as The Outer Worlds Steam release date is October 23.

Obsidian made the announcement on Twitter, stating: “The Board is excited to inform you that job openings for employees through Steam will be opening on [October 23]! Your shift begins in 2 weeks, spacers, so start your preparations today!” A link to the Steam page is provided, where you can wishlist the action-adventure game. No price is listed, but expect it to be around $50-$60 range, or equivalent in your currency, in line with the cost on the Epic Games Store and Microsoft Store.

If you’re unfamiliar, The Outer Worlds is a single-player RPG set in a hyper-capitalist alternate future where mega-corporations rule the solar system. It’s very choice-based, as you navigate factions, and communities, and decide whether you want to foster peace or further conflict. It’s in a similar vein to developer Obsidian’s Fallout: New Vegas, with lots of retro-technology and jet black humour, but crossed with some of the action-RPG elements the studio honed working on South Park: The Stick of Truth.

Our Dustin Bailey enjoyed the game in his review, writing: “Much like the potential rewards from a life at the edge of the galaxy, then, despite some hardships along the way The Outer Worlds is a journey worth undertaking.” The first DLC, Peril on Gorgon, released in September, and will presumably be included or available on Steam.

The Board is excited to inform you that job openings for employees through Steam will be opening on Oct 23! Your shift begins in 2 weeks, spacers, so start your preparations today! 🚀✨https://t.co/Hm7myuqXqs pic.twitter.com/LquEgz7njq

Obsidian put Honey, I Shrunk The Kids-sim Grounded out on Early Access in July, providing regular updates, and a roadmap, since. The studio’s next major release, Skyrim-like RPG Avowed, was revealed during the summer.