Age of Conan developers Funcom recently revealed that they’re working on a new atmospheric horror game set in an amusement park, releasing a suitably moody screenshot and announce trailer. It wasn’t much to go on, but The Park seemed to be making all the right noises – its focus seemed to be on creating scares through an atmosphere of foreboding and isolation rather than jump scares, and although abandoned theme parks are well-travelled paths in film and literature, they’re not a cliche in games yet.

However, to this writer’s eyes, The Park’s three new screens start to erode that early promise. There’s nothing at all wrong with that top image – it’s cold, dilapidated, but recognisable. The game’s central plot is about a woman, Lorraine, looking for her child, Callum, and this is exactly the sort of environment you wouldn’t want to imagine your kid alone in.

However, the wheels start to fall off the ‘atmospheric’ horror wagon with this next screen: 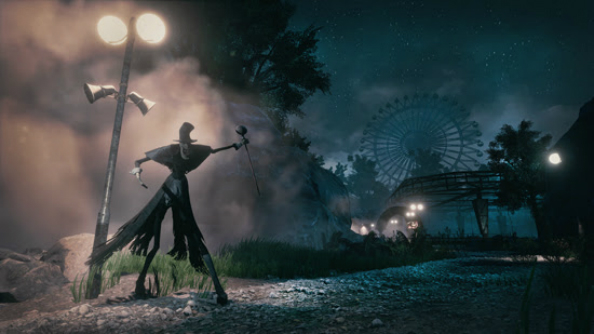 Either Manny Calavera’s been on the Slim Fast, or that’s a cookie-cutter horror game antagonist. Take him out of the shot, and you’re left with the fear of the unknown; your imagined demons laying in wait behind the fog or in the shadows cast by those dim lights in the middle distance. Put him in it, and you’ve got what looks like rejected Darksiders box art. This is the screenshot that does it for me, though: 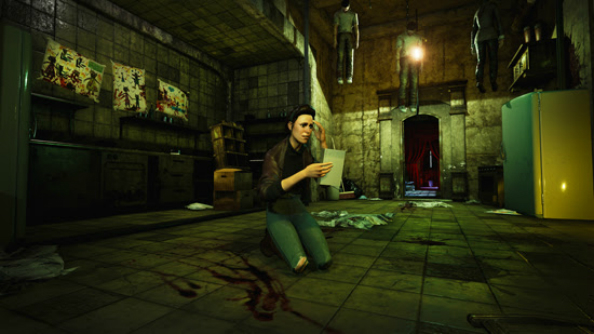 Apparently Lorraine just found Eli Roth’s prop storage room. The Park describes itself as a “psychological mystery thriller where you step into the shoes of a mother whose son has gone missing at the mysterious Atlantic Island Park.” I don’t mean to be unkind, but I’d say you forfeit the whole psychological mystery thriller thing the second you fill a room with blood, children’s drawings and hanging cadavers.

I hope The Park turns out to be better than those all-too-demonstrative screens suggest, but it’s hard to imagine how I’m going to engage with the subtler aspects of its atmosphere and immerse myself in its emotional, maternal drama after having seen that room.

The game’s out this October, and I’m still rooting for it. Really.