It’s that time of year – the days are colder, the nights longer, and the streets lined with office workers who drink precisely once per year, and they’ll be damned if they don’t end up attracting the attention of at least two emergency services while doing so. It is, of course, holiday season, which means it’s time to really dig into that questionably acquired fossil fuel fortune and buy the very best videogames hardware and accessories possible.

Shopping for software rather than exorbitantly-priced gizmos? Our best PC games feature is a good place to start.

£50k for a racing sim setup with a hydraulic seat? Why not. Just raise the rent a bit more across your portfolio of east London flats. A PC with four watercooled NVIDIA GTX Titan Xs? But of course. And, for those of us who don’t own football teams, some sensibly priced alternatives to pop under the tree. 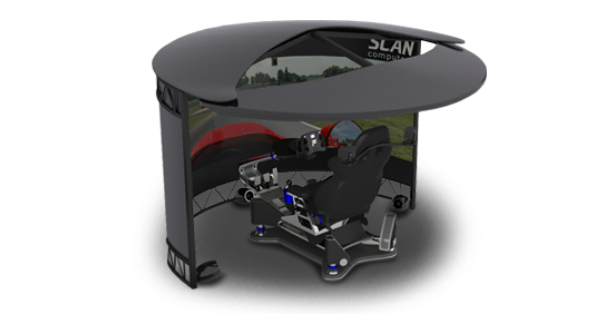 The VRX iMotion Simulatorincludes a 184-inch curved canopy and projector with a5760x1080 resolution, an iMotion racing seat with hydraulic base that lurches forwards, backwards, and side-side-to-side according to your in-game vehicle’s behaviour, and a Clubsport wheel & pedals with Raptor HOTAS interface, and a 5.1 surround sound system. It’s available for a shade under £50,000 at Scan.co.uk, making it the perfect gift for someone with a burning passion for an utterly realistic motorsport experience, but an equally strong and inexplicable reluctance to simply buy a legit sports car and take it to a track day. Perhaps you’ve got a few too many points on your license having driven back from your Illuminati meeting with a bit too much Louis Roederer Cristal in your blood.

Also worth a mention are the incredible hand-crafted racing sim components at Derek Speare Designs, luxury offerings from Ricmotech (including addons for popular racing wheels such as the Logitech G27), and the astounding quality and pricing of Leo Bodnar‘s sim racing wheel offerings.

Thrustmaster’s TX racing wheel and pedals will set you back £399. Admittedly that’s not loose change, but with a detachable hand-stitched leather wheel and impeccable force feedback servo, it’s a serious solution for sim racing. By way of a bonus, it doesn’t require the construction of a new wing of your home in which to house it, either. 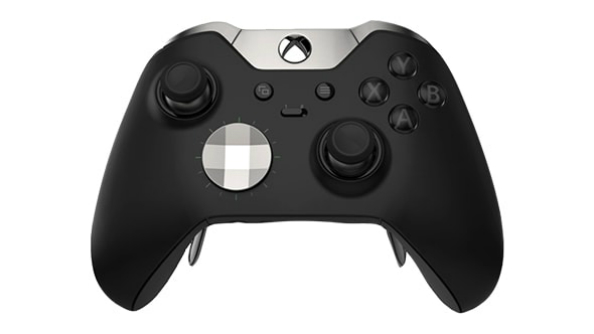 Well, you can’t very well call yourself a member of the global elite and not use an Elite controller, can you? Plus it’s only £120, which is the same price of a pint of milk these days, you faintly suspect, having never actually had to buy a pint of milk. In the name of opulence, Microsoft have adorned the Elite pad with that attractive indented d-pad, swappable thumbsticks, a traditional d-pad, and a set of paddles at the rear because pressing the face buttons is for the common folk. Also they’re handy for changing gear in racing games. Despite the heavy outlay, the Elite controller has so far recieved overwhelmingly positive reviews, and Microsoft are struggling to meet stock demands.

It’s Microsoft’s Xbox One controller, now doomed to live in the shadow of its flashy brethren, available for £59.99 with a wireless receiver. Why not the DualShock 4? Well, firstly it’s a bit trickier to get working with full functionality on PC as it doesn’t have native drivers. Secondly, it’s trickier to get working wirelessly. Thirdly: those thumbsticks. They’re comfortable, but roughly as durable as a storm shelter made of lolly sticks and cigarette papers. 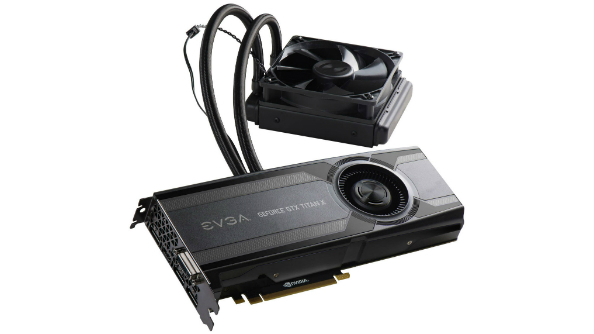 So you’re telling me you’re running the world’s most powerful and expensive graphics card with an air cooler? That’s quaint. In fact as the heat death of the universe draws nearer there may well be wisdom in opting for a less extreme cooling solution, but until that day there’s EVGA’s 12GB, watercooled GTX Titan X. Core clock speed reaches 1241MHz in boost mode, while the memory operates at 7010MHz – I’ve run the numbers, and that should be enough to run Ashes of the Singularity just fine before returning to the games you actually play. CS:GO and Football Manager 2016 never looked so good! Or, indeed, any different. Still, it’s an investment, isn’t it? A good quality graphics card will never go out of style, as they say.

If you’re gaming at 1080p, Zotac’s compact and powerful take on the GTX 970 will see you right, and costs £250 at Overclockers UK. The law of diminishing returns is no less true in the graphics cards market than anywhere else, so it’s not like you’re getting 25% of the Titan X’s performance for an equal fraction of the price. 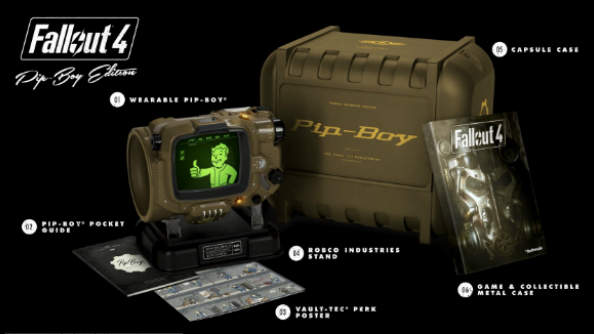 Having a limitless pool of wealth means never having to care about inflation, or the laws of supply and demand. You want a thing, and that thing is the Fallout 4 Pip Boy Edition. Nothing else matters. Least of all the fact that the thing you want has increased in price by 75% since the limited stock sold out. Just buy it, it’s got a gadget for your wrist look! You’ll have to head to eBay or the like to pick up a copy now, though.

If you crave the esteem of owning a version of a game that includes bonus promotional materials but want to hand over a figure for it that still vaguely resembles the price of a game – Just Cause 3’s Collector’s Edition is your lead. It’s currently available for £54.99 on eBay, and includes a map, art book, and replica grappling hook. 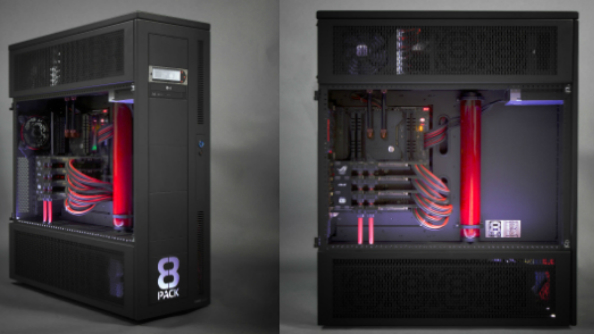 Overclockers UK have gone mad with this build. You can’t see the scale in the above pictures, but were there a man standing in front of the case, his head wouldn’t even reach the top of that ‘8’. You can park both your Bugatti Veyron Super Sports in it without interrupting the airfow. While those may be obvious lies, the 8-Pack Supernova is a gargantuan PC in every other sense. It is, simply, “the fastest and most efficient production PC available today,” according to its creator. The highlights of its spec sheet include anIntel Core i7 5960X overclocked to 4.6GHz by the number one ranked overclocker in the world, Mr 8-Pack himself, and a four-way SLI array of watercooled GTX Titan Xs. Yep, that should probably do it. It’s time to turn on HairWorks in The Witcher 3’s graphics options.

DinoPC’s Mayhem Z3 is poweful, affordable, dinosaur-themed and aesthetically pleasing. Santa could do a lot worse. £1679 gets you an Intel Core i75820K Extreme CPU and NVIDIA GeForce GTX 980 graphics card, among other silicon treats. 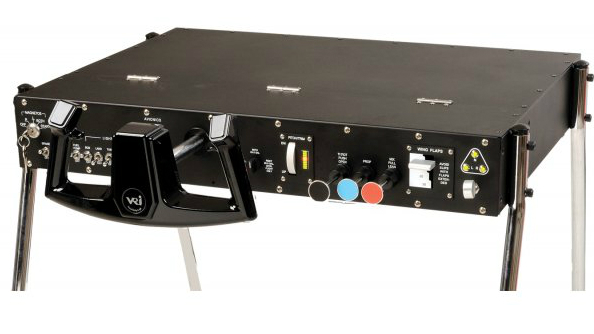 If you told me this contraption was one of the devices the BBC radiophonic workshop employed to create the haunting audio effects of the original Doctor Who series, I’d believe you. It is, however, an extremely high-end flight sim control solution from VRInsight called the Flight Master Control Panel, and it costs £2895. A hefty outlay for most, but after you short-sold that national currency for a massive personal profit you stopped having to read the price tags, so happy days! What fun you’ll have botching landings over Toronto airport in heavy storms.

Thrustmaster’s HOTAS Warthog is an exact replica of the flight controls inside a real A-10 Warthog, and costs a mere £369.99. Granted, the radiophonic workshop wouldn’t know what to do with it, but if you’ve ever tried to control Flight Simulator or Elite: Dangerous with a mouse and keyboard, it’ll be like lowering yourself into a hot, fragrant bath of well-designed peripheral technology. 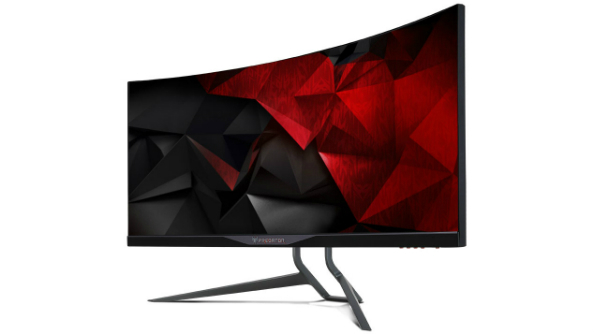 LED backlit? Check. 4K native resolution? Check. G-Sync compatible? Check. Curved screen? Yep, why the merry hell not. 32-inch display panel? Well, you wouldn’t want to have to squint, would you. Acer’s PredatorXB321HK is the very definition of display decadence, and on a serious note proves there’s a much more logical application for curved screens in a gaming environment (where just one person is viewing the screen) than that of a TV (when three or four must awkwardly cuddle to contest the optimum viewing angle). Its 60Hz refresh rate isn’t the fastest on the market, but if anyone gives you any lip you can simply reply: “Yeah, but this one cost over a grand, though.” Then have your driver floor it while winding up your smoked window.

For £521.12, Asus’s ROG Swift PG278Q monitor gives you basically all you could ever desire in a monitor – bar an IPS panel. For some that’s alone is justification to turn on one’s heel and make a dramatic exit, but it’s worth considering a TN screen that boasts a 144Hz refresh rate, native resolution of 2560 x 1440, G-Sync compatibility and 1ms response time though, isn’t it? Yes. Yes it is. 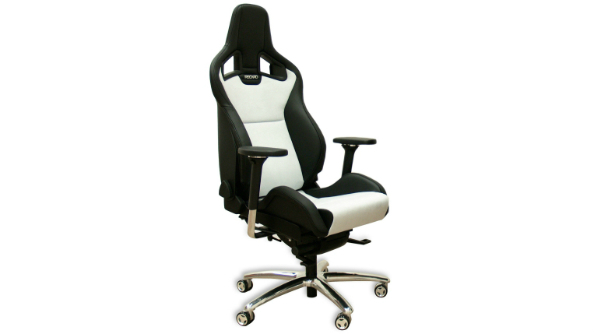 Current office chair not throne-like enough for you? Sick of being flung clear of your seat during vigorous gaming sessions? Recaro has the answer for you in its Sportster CS office chair, which you can pick up at Demon Tweeks for £3061.20. What’s happened here is that someone’s stuck the hugely popular Recaro Sportster CS racing seat, which you can buy with heating and an airbag for your actual car for well under £2000, popped it on a swivel stand and dusted their hands off. But how else to ensure safety if your gaming session results in a violent roll? Who’ll be laughing at your £3000 chair then, eh?

Vertagear’sS-Line SL4000 gaming chair is adjustable six ways from Sunday, sports a very similar bucket seat design to the Recaro, and is avaiable at Overclockers UK for £214.99. Crikey, it’s even got a lumbar pillow. Nine out of ten blindfolded oligarchs can’t tell the difference.

Are you obnoxiously wealthy as a result of your family’s aggressive and legally ambiguous business dealings? Do you have a taste for the gaming high life? Do you have Star Citizen taste but Sid Meier’s Starships pockets? Let us know your most extravagant purchases and dream acquisitions in the comments below.