To say that Ubisoft’s The Settlers reboot is carrying some weight on its shoulders is no understatement. The 30-year-old RTS series hasn’t had a new entry in over a decade, and this latest offering was originally slated to release in the before times of 2019.

It was pushed back to 2020, before simply being delayed “until further notice”, but now it’s back in the public eye and releasing in just a couple of months. So, was the extra time enough? And is there still a place for The Settlers in the current pantheon of strategy gaming greats?

This series has always walked a fine line between the scale of a Warcraft-like RTS and Anno’s careful economic management. The main challenge it faces is that both of those sub genres have evolved in the past ten years. Anno 1800 elevated the legacy strategy series to new heights, and it’s now rightly regarded as a powerhouse economic simulator, offering both a rich setting and a deep, diverse feature set. It’s about to embark on a fourth season of DLC, despite the developers only originally having plans for two. Similarly, indie RTS games like Northgard are skipping more laborious components like production chains to focus on their setting and moment-to-moment decision-making.

Ubisoft Düsseldorf cites the third and fourth Settlers games as specific inspirations for the reboot, but the studio is steering clear of historical factions and opting for fictional civs, which have been the series’ MO since the fifth Settlers game, Heritage of Kings. 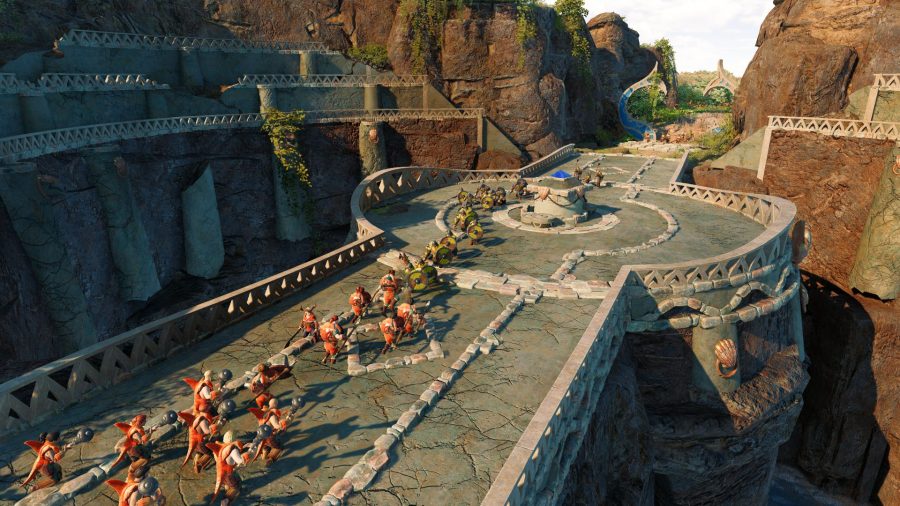 The Settlers continues its tradition of limiting you to indirect control over civilian units, apart from the new engineer unit. These builders specialise in construction, letting you expand your settlement’s borders, and prospect for rich mineral veins that are crucial for kick-starting your advanced economy later on. It’s worth bearing mind that engineers are practically defenceless, so you’d be wise to send some soldiers with them unless you want them to be preyed upon by bandits and rival factions.

Apart from that, the only units you have direct control over are military ones, which are divided into ranged, melee, support, and siege categories. There are two types of melee units (one offensive, one defensive), a single option in the ranged and support categories, and then two different types of siege units. These basic units each have obvious strengths and weaknesses, so battles are more about deploying the right unit in the right situation than complex military manoeuvres.

Factions get unique variants of existing units, such as Elari rangers who wield deadly crossbows and Maru Guardians who carry a spear instead of a sword for extra range. Each unit requires its own specific resource to construct, which brings us to The Settlers’ economic side. 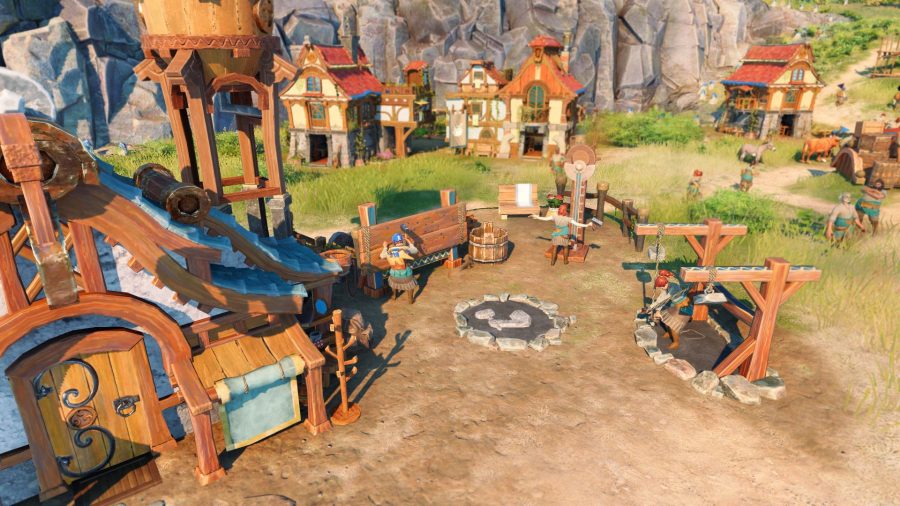 Compared to Anno, managing your finances in The Settlers’ feels very simplistic. That’s fine in principle; there’s no need to replicate the intricacies of a full-blown economic sim. But what is there doesn’t give way to any meaningful interactions.

For example, there are several different types of food resource, but food only seems to be useful as a trade commodity, or to power a special buff that doubles a building’s production rate. It doesn’t seem to have any other use: it’s not used as upkeep for citizens and it doesn’t seem to be an important cost for anything else.

There are really only three phases in The Settlers: get building materials, build stuff, and then gather rarer resources to build a good army. There are, theoretically, a few different ways to reach that last stage. You could invest your starting materials into building a strong early game army, but it’s not long until your military progress comes to a halt and you’re forced to start expanding like everyone else. Alternatively, you could build a harbour and hope to trade early game resources like wood and stone in order to fund your early game warmongering. However, these measures always feel like more of a stopgap than an effective strategy. 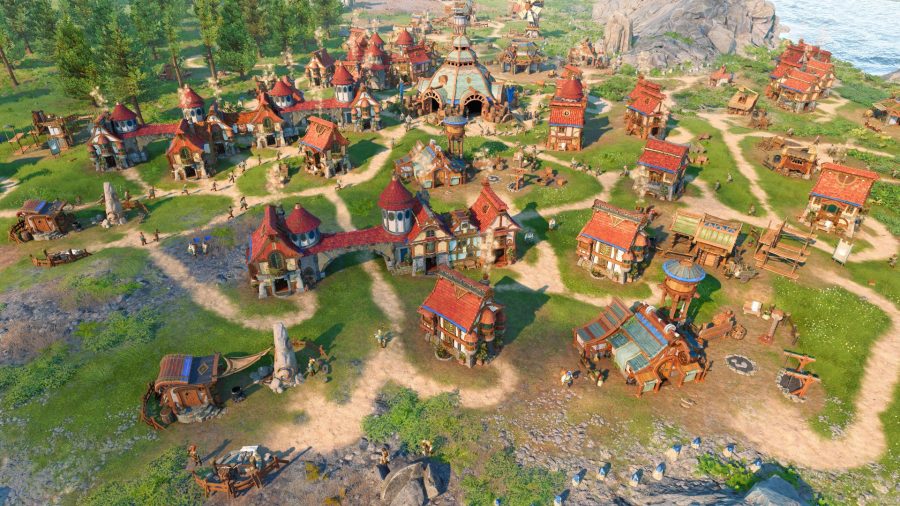 It’s a very dry economic system, even though logistics is touted as one of the shiny new features. By building slightly better roads and donkey transports, you can speed up the flow of goods around your settlement, but this doesn’t seem to have a noticeable impact. More often than not, the number of citizens you have seems to be the main cause of bottlenecking.

You can get more citizens by building residence buildings and waiting for them to be churned out, but as citizens don’t seem to require food as a resource, there’s no proper safeguard against just spamming more buildings and generating as many citizens as possible right from the start. It’s not a difficult model to get the hang of, but it’s neither intuitive nor particularly robust.

All of this is to say our time with The Settlers hasn’t been particularly satisfying. The preview was limited to sections of tutorial and some skirmish modes; I only played 1v1 skirmish games against the AI. To be fair, 1v1s are only really interesting to competitive players: the final build will boast 2v2 and 4v4 modes on top, against both AI and other players, which should be more entertaining. There’s also a special ‘onslaught’ mode and a solo campaign – campaigns in strategy games usually include bespoke rulesets and scenarios, and this could prove to be a redeeming feature. 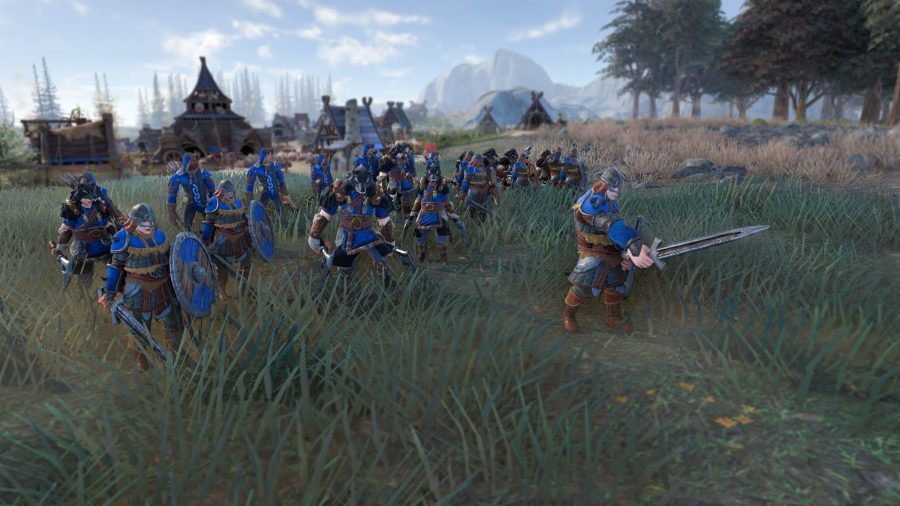 But there’s also a real danger that The Settlers has come too late. There are plenty of great games that offer a more focused experience of the individual elements, whether that’s other civ-building RTS games like Northgard or Age of Empires, or economic sims like Offworld Trading Company and Industries of Titan. Some classics are meant to remain in the nostalgic realm of Back in The Day, and The Settlers has yet to prove whether it’s capable of reinventing itself for modern strategy gamers.

The Settlers will release on PC on March 17, 2022, although if you want to try it for yourself there will be a closed beta from January 20, with sign-ups on the official website.