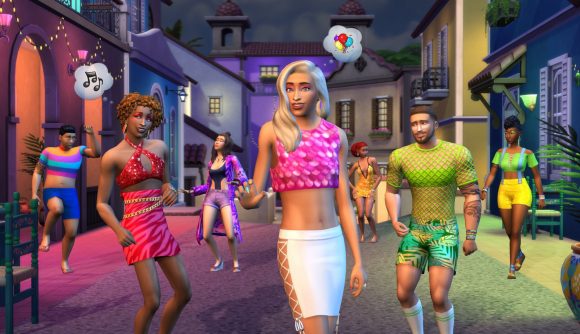 We’re entering a new season for The Sims 4, and we’ve got a roadmap teasing us with what to expect through the end of March. We know a new game pack is coming – likely one focused on wedding parties – but there are also two more kits on the way, and one of the micro-DLC packs has apparently leaked through a store listing.

A Microsoft Store listing for The Sims 4 Carnaval Streetwear Kit was uncovered by Aggiornamenti Lumia on Twitter this week. A February 3 release date was noted for the DLC, and the listing included a screenshot. The tweet with the leaked info has since been deleted, but fansites like Sims Community have saved it for posterity.

The designs of the Carnaval Streetwear Kit fit in with the roadmap’s promise of “vibrant kits that celebrate fierce design”. As you’d expect, the Carnaval clothing is mostly colourful and revealing – maybe a bit chilly this time of year, but hey, Brazil is mostly south of the equator, it’s fine.

Sadly, we still don’t know when the next proper expansion pack is coming out. The roadmap covers releases through the end of March, so we’ll likely be waiting until later in the year for more major content.

Cheers to the moments worth celebrating! 🎉🎊 And there's a bunch to unwrap! ✨🎁 #SimthingtoCelebrate pic.twitter.com/JjUoWKtKXr

For more sandbox games to check out in the meantime, you can follow that link.