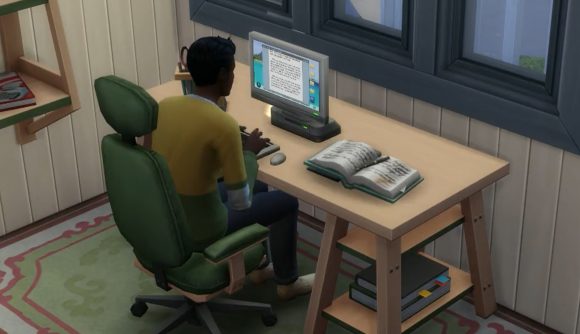 Following news that The Sims 4 will soon be getting a new Create-a-Sim mode based on a personality quiz, it looks like some other key aspects of the game are getting an overhaul in an upcoming update. A new-look main menu, among other features, will soon be heading to the game – but some people have raised questions about the emphasis it’ll place on which expansion packs you do and do not have.

The shiny new menu screen was showcased in a recent Twitch stream by its developer Maxis, which you can check out further down in the article (around the 12:16 mark). The menu is more or less split into two halves, with the bottom section reflecting “Your Collection”. It’s broken down into categories of Sims 4 content – Expansion, Game, Stuff, and Free Stuff – with little icons presumably indicating which ones you’ve got installed.

It seems pretty logical as a way of seeing what you’ve got compared to what’s available – but some on Reddit have suggested that it focuses a bit too much on the DLC you don’t yet have. In a post sharing an image of the new main menu, user Painterknittersimmer says that with the new menu “it’s way more obvious now what you do and don’t have, and there’s a link to ‘build your bundle.’ It’s focused less on the game you have and more on what you could buy.”

Similarly, others have made comments such as that it perhaps makes you “focus on getting the next DLC that you don’t have”, and on another related post, “the new main menu is trying way [t]oo hard to make you buy DLCs”, and “the new main menu is literally ‘did you know we had all of these content packs? You should buy them. Buy them, now’”.

However, other users in both threads have gone on to discuss their views more about the aesthetic changes to the menu (such as its colour schemes), with some perfectly happy about the new look. Though opinion appears to be a little divided, with the number of expansion and stuff packs available for the game, perhaps some players looking to see at a glance a breakdown of what they’ve got running in their game so far will find it helpful.

Maxis hasn’t yet revealed a date for when the update will arrive, but we’ll likely see the changes arrive soon.