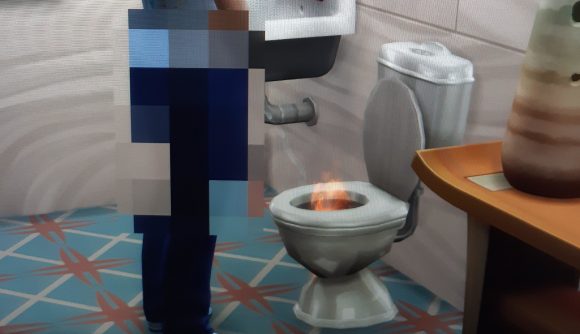 The latest patch for The Sims 4 has landed, and with it, a host of new bugs and features – this time, at least, some of the bugs are fun enough to seem like features. Ahead of the launch of the Eco Lifestyle expansion, the life sim has gotten a massive free update with a load of new content, including ladders, some fantastic quality of life features, and, er, makes your Sims pee fire.

The new patch reworks the inventory system, adds ladders, expands how your bills are displayed, and adds both reposition workers and firefighter NPCs, which had both been absent from the Sims 4 up until now. It also reworks how build mode items affect the game, giving certain items properties like environment score stats or adjusting your utility bills – and certain building materials will now have a greater chance to spread fire.

It’s probably not intentional that Sims are now peeing fire, as numerous players (via Rock Paper Shotgun) have reported. It appears to be nothing more than a weird visual glitch, but for now you can role-play the idea that your sims have just inherited the worst superpower ever.

There have also been more serious issues with the patch, including crashes that kept players from loading save games, but that one’s gotten addressed more quickly.

PC/Mac players: a new patch was just released to fix the crash from yesterday's patch
Console players: we're still working hard to get you the same fix ASAP

Patch notes are below, please keep reporting your bugs to me (or to Answers HQ), thanks so much! https://t.co/yXOUT7Byhj

Perhaps the most notable minor update in the patch notes is the new ‘send home’ interaction, which lets you quickly and quietly kick Sims off of your lot. Unlike the previous options, where your own Sim would have to actually walk up and ask the offending person to leave – provoking a relationship hit – this one is entirely player-driven, and invokes no hurt feelings.

You can see the full list of changes on the official site. For more sandbox games, we’ve got a big list of great ones you can find at that link.