When EA announced that the next DLC pack for The Sims 4 would be magic-focused, my inner Gryffindor squealed with joy. Occult Sims and supernaturally themed packs are some of the more interesting content released by EA, often full of game-altering and rule-breaking systems that turn The Sims 4 on its head.

Realm of Magic, which is available to purchase now, looks to do exactly that, with plenty of spells and potions for you to get into some right magical mischief. Also, what better way to target a generation raised on Harry Potter than with a game pack full of witchcraft and wizardry?

Getting stuck into Realm of Magic is easy, with the option to either create a spellcasting Sim in Create-A-Sim, or travelling to the Magic Realm and speaking with one of the three sages. After completing a simple fetch quest, your Sim is made a bona fide witch or wizard, free to unleash some magical havoc. Or, if you’re anything like me, make an enormous group serving of mac and cheese in a cauldron.

Your witchy Sim can be kitted out with magical items, including your choice of wand, broom – or mop, if your Sim is on a bit of a budget – and familiar. There’s plenty of variety to make each spellcasting Sim different, and familiars aren’t just there for the aesthetic; they act as advisors, guiding you to magical triumphs and away from blunders. They can also help out in duels, and even save you from death. My Sim’s familiar, a leaf bat named Peanut Butter, saved her on more than one occasion from being suitably humiliated after a duel gone wrong.

Speaking of aesthetics, Realm of Magic comes with a wardrobe-busting selection of new hair, make-up, and clothing options. The clothing feels drawn from the closet of Sabrina The Teenage Witch and the infinite suitcase of Fantastic Beasts, with ornate flowing robes, patterned trousers, and sheer blouses. There are also two new aspirations: Spellcraft and Sorcery and Purveyor of Potions, to give your Sim some realistic life goals in the wizarding world. 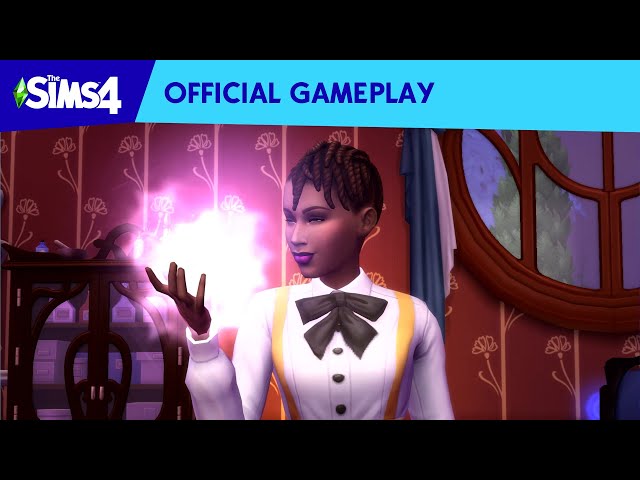 Put a spell on you

In Realm of Magic, there are four schools of magic; Practical, Mischief, Untamed, and finally Potion Brewing. Becoming a magical Sim opens up a skill tree to climb and a spell book to learn, starting out as an apprentice spellcaster and eventually becoming a master witch or wizard. Experience is gained in a variety of ways, including reading books (which can also teach you spells), experimenting with potions in the cauldron, practising magic, and being taught by the professors that lead each school of magic.

You don’t have to worry about pledging your allegiance to a school and turning your back on the others, as all schools are open for you to learn from at any point. If only Gryffindors and Slytherins could be so civil.

This is definitely a blessing, as the spells in Realm of Magic are simply too much fun to lock any away. Practical magic, which offers spells with incredible names such as Scruberoo and Copypasto, helps with some of the mundane aspects of the Sims, assisting in cleaning, conjuring meals from thin air, and duplicating items (I’m not saying you should duplicate a money tree, but you definitely should). 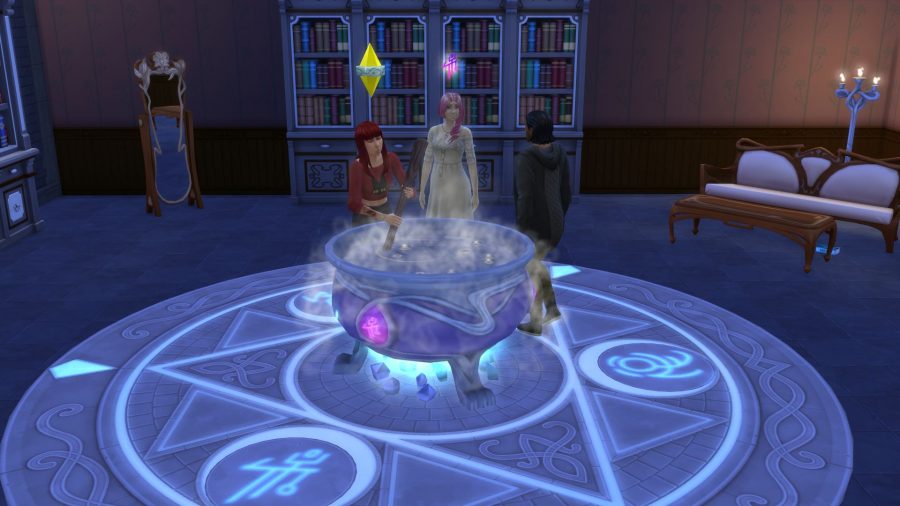 Mischief and Untamed magic are where the fun really lies, though. Untamed magic is deliciously irresponsible, allowing you to cast spells to control other Sims’ minds, duplicate yourself, and even dabble in a bit of necromancy. Sadly, there is no option to kiss your duplicated self (please patch this in, EA). Mischievous magic can have equally hilarious outcomes, with options to turn Sims into inanimate objects, or to make them repulsive to every other Sim around them. Is that bullying? It might be bullying.

Perks are also granted as you become more adept at your magic, ranging from increased experience and better success rates with potion brewing to powerful buffs that can help prevent death and stop curses.

Potions can also become game-breakingly powerful, and basically act as cheats that you can access without using the debug tool (no more typing rosebud over and over!). At beginner level, potions can fulfill all a Sim’s needs, while master-level potions can revive any Sim that has died. If you’re the type of player that would much rather spend their time socialising and dabbling in witchy fantasies than cooking spaghetti and bathing, then these potions, like Practical magic, are a helpful way of skipping the everyday business of living in The Sims. Players who relish that aspect of the game, however, may find them a little too useful, and a quick way to make things boring. 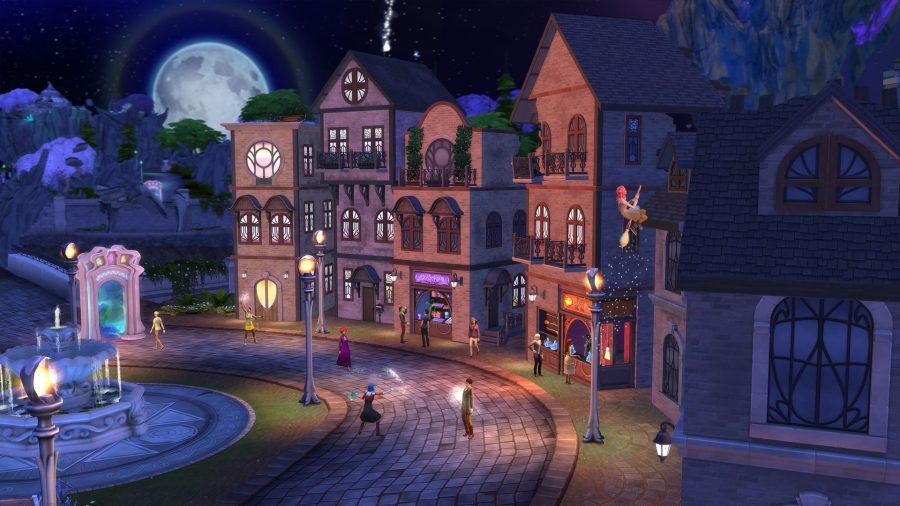 You’ll be forgiven for loading up Glimmerbrook, the new neighbourhood in Realm of Magic, and feeling slightly disappointed in its size and lack of overall… well, witchiness? With only five lots available, Glimmerbrook is a bijou world filled with forests, a creek, and Southern Gothic architecture. Imagine ‘Welcome To Night Vale’ meets The CW, and you’re nearly there.

But there’s more beneath the surface of Glimmerbrook; the town hides an otherworldly secret within its woods. Roam around the neighbourhood for a while and you’ll run into a portal, which grants access to the Magic Realm, the real star of this game pack. Easily one of the best-designed lots yet in The Sims 4, the Magic Realm is a gorgeous place comprised of three floating islands, embellished with foliage and waterfalls that cascade into an endless void of vivid pinks and purples.

There’s even a riff on Harry Potter’s Diagon Alley in Realm of Magic, aptly named Casters Alley. Adorned with floating furniture and ghostly vendors, Casters Alley is brimming with everything a budding witch or wizard could need – from brooms and wands to potion ingredients. You’ll also find a selection of familiars here to keep your occult Sim company, from traditional frogs and bats to painfully adorable floating voodoo dolls and skulls. 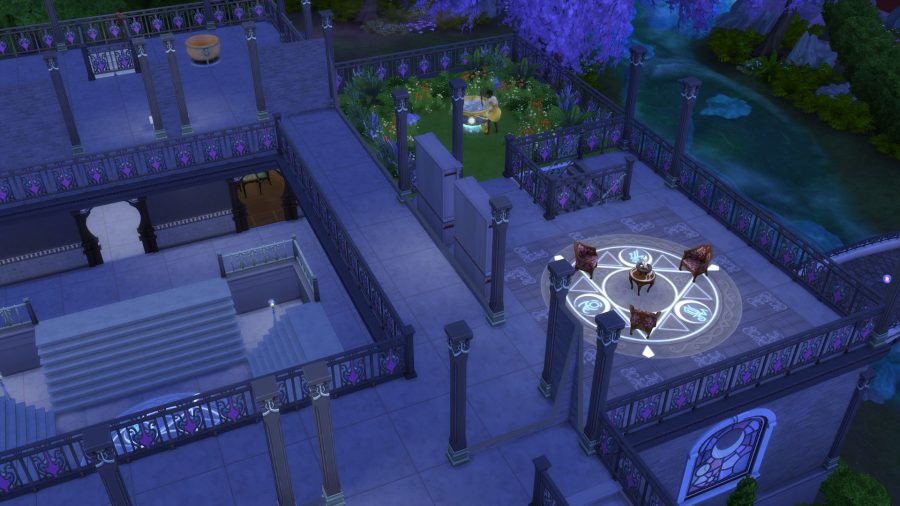 of magic and the mundane

What has impressed me most about The Sims 4: Realm of Magic is its potential longevity in comparison to other expansions. While the emphasis on story in The Sims 4: StrangerVille was great to see at the time, and stirred a lot of fond nostalgia for the narrative focus of previous Sims games, I will admit that I haven’t gone back to replay it.

Realm of Magic doesn’t quite have the storytelling chops that die-hard Potter fans will probably be hoping for, and which pre-release trailers implied, teasing as they did an overarching story about the Magic Realm and the Sages that hold it together. It instead opts for small fetch-quests and tick-box side missions. Thanks to the plethora of new items, clothing, and spells on offer, however, it’s easy to immerse yourself in the witch and wizard lifestyle – there’s plenty of opportunity for role-playing. For me, that meant my Sim becoming a total recluse, living out her life as the neighbourhood crone, surrounded by herbs and cats and brewing potions so disgusting they would make even Snape gag.

Perhaps bizarrely, all the magical stuff bleeds into the daily life of your Sims much more coherently than content from StrangerVille or the vacation-themed packs. It may seem jarring at first to see two characters having a Battle for Hogwarts-esque duel for the ages in the middle of the Magic Realm, surrounded by spellcasters and Muggles alike, but you’ll soon wonder how you coped without being able to summon a bowl of chilli out of thin air.