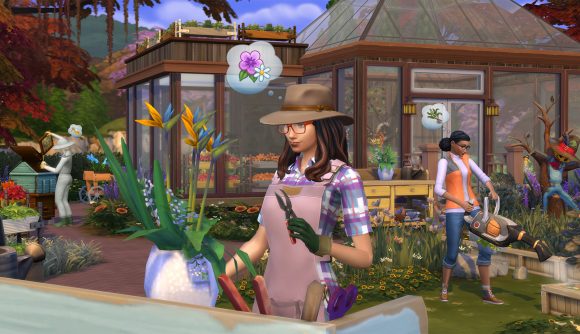 The Sims 4 is still trucking along with ever more DLC packs and expansions on the way, and there are still plenty of features long-requested by the community that aren’t yet in the game. The devs have published a new ‘summer of Sims’ roadmap for the next three months of updates, and while details are light right now, there’s hope for a couple of big things that fans have been wanting.

These summer updates, set to release over the course of May, June, and July, include three base game updates, a courtyard-themed kit, a “creative” game pack featuring a new career, and a “charming” expansion pack that will let you “bond with nature”. There will be a Pride-themed “virtual block party”, and the opportunity to “rock out at the Sims event of the summer”, too.

The idea of getting bond with nature in the new expansion pack has fuelled long-simmering hopes that The Sims 4 would get into farming. The phrasing of the teaser could mean just about anything, though – from farming to hiking to some sort of magical woodland creature expansion with spriggans and fairies.

Similarly, the new career in the creative game pack could be just about anything, but the “rock” event elsewhere in the roadmap has players hopeful for bands and a music career. Again, there are plenty of things that could mean – but fans have certainly been setting their expectations accordingly.

We’ll start learning more about what to expect from these summer updates and DLC releases with a stream from the devs on May 18 at 11am PDT / 2pm EDT / 7pm BST.

Who's ready for a Hot Sims Summer 😎☀️🌅#SummerofSims #MondayMotivation pic.twitter.com/XWdB9Gpsea

Sims 4 mods will have your back for just about any feature you might want, too, whatever shape the official updates end up taking.