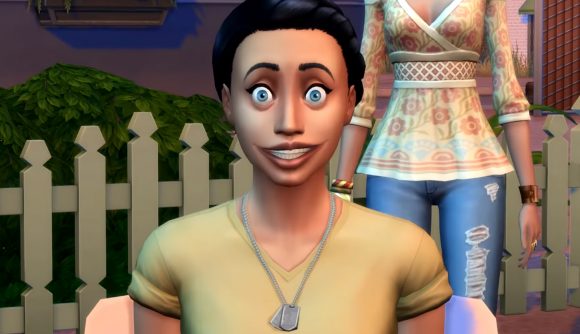 From haunted ashes and alien abductions to vampiric nightclubs, The Sims has never been shy about getting a little weird from time to time. The Sims 2 even had a full Area 51-themed suburb called Strangetown, and it looks like The Sims 4 is returning to that theme in a major way. StrangerVille will bring us horrible conspiracies, possessions, and apparently a secret lab containing some sort of giant plant monster.

StrangerVille is a ‘Game Pack’ – mid-sized add-on sitting between a full ‘Expansion’ and a minor ‘Stuff’ release – and it appears to be similar in scope to similar story-driven packs like Jungle Adventure. Here, your Sim heads to StrangerVille to uncover whatever conspiracy is going on underneath the surface of the desert town with all its possessed inhabitants.

True to the expansion’s theme, the developers are keeping the details mysterious for now. StrangerVille will have “weird weather, creepy townies, dangerous plants, odd collectibles,” and a set of government agents making use of listening devices and unmarked vans. Your Sim will be able to pick up military training, but whether that is a full career path – as it’s been in previous games – or some other sort of skill remains to be seen.

The trailer ends with an expedition into some sort of secret base, and the shadow of a giant monster falls on our heroes in the end.

On the official site, you’ll find an ongoing set of comics that will reveal more over the next few days.

StrangerVille launches on February 26. For now, you can rest assured that the truth is out there – just look into a tinfoil hat if you get an uncontrollable urge to smile.