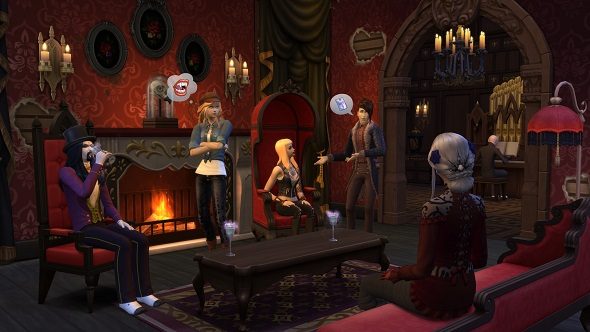 If you’re in the mood for some woohoo, why not check out our list of the best sex games.

Vampires will have their own needs, trading microwave TV meals for plasma sucked from the neck of another Sim. Well, you can also buy it in packs, or grow plasma fruit, but what kind of vampire would that make you?

You can even turn other Sims into vampires and “move around in different forms” – you’re going to be able to turn into a bat, and possibly some other creatures, essentially.

Daylight, as always, is really bad for vampire skin, so you’ll need to switch up your schedule. You can also walk around in a human-like light form, or show off your true dark form, which comes with its own set of animations.

You’ll be able to customise your vamp’s look, too. “This Game Pack also adds a bunch of totally new Create a Sim options,” says the official release. “We’ve got glowing eyes and creepy eye sockets, new washed out skin tones suitable for Sims that literally never see daylight, and some really dramatic brow options to give your vampire that sinister-ancient-being look.”

The crust on the plasma-filled pie is the Forgotten Hollow, a new world available only in this pack, where nighttime lasts longer than usual. It’s got a creepy gothic vibe, and you’ll be able to deck it out with all the stuff you’d expect: coffins, pipe organs, and garish gargoyles.

The Sims 4 Vampire Pack is out on January 24.