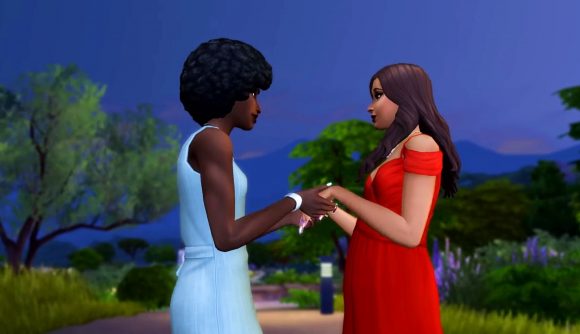 EA and Maxis won’t release The Sims 4’s upcoming My Wedding Stories expansion in Russia, as an LGBTQ storyline would be “subject to changes because of federal laws” in the country.

This week, The Sims 4 team revealed the new pack to the world with a trailer that puts the story of Dominique and Camille front and centre. One of the women is set to marry a man but becomes unhappy with her partner and ditches him for another woman. In a post on its website, the devs explain that the vision for My Wedding Stories is to explore “the joy of finding love, celebrating that love, and telling stories that have meaning on a personal level”. As such, pulling back on Dominique and Camille’s story would mean “compromising” the values that the studio lives by.

“The ability to tell stories – any story – is at the core of what we do at The Sims,” a statement reads. “Holding back Cam and Dom’s story meant compromising the values we live by. We are committed to the freedom to be who you are, to love who you love, and tell the stories you want to tell.

“So what does that mean for you, our players? We are steadfast in upholding that commitment by shining a light on and celebrating stories like Dom and Cam’s, so we have made the decision to forgo the release of ‘My Wedding Stories’ where our storytelling would be subject to changes because of federal laws.”

As explained by Human Rights Watch, the Russian law to which the statement refers was introduced back in 2013, banning the promotion of “non-traditional” sexual relationships to minors in the name of protecting them from “information promoting the denial of traditional family values”. According to HRW, LGBTQ youth have faced increased social hostility since the passing of the law and struggle to enjoy fundamental rights such as health, education, and information to this day.

My Wedding Stories is set to launch on February 17.