In an effort to spend less time cooped up in my office, I got myself a Steam Link last year. It’s probably been the best hardware purchase I’ve made in yonks. Since I found myself using it all the time, I thought, “What the hell,” and picked up a Steam Controller to go along with it.

Want to know if the Steam Link is worth adding to your living room? Check out our Steam Link review.

My Steam Controller sits next to my Xbox controller, on my coffee table, calling to me, demanding that I pick it up. It’s not that it’s a thing of beauty, but rather a strange-looking curiosity. It looks like a giant cassette tape that’s melted into a shape vaguely resembling both the Xbox and PlayStation pads. It’s odd, then, and that makes me want to play with it. 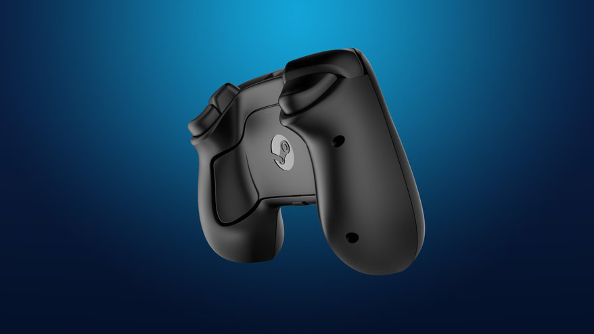 I know that when I do pick it up, however, that after an hour I’ll put it down again, my face contorted in anger and frustration, my hands confused after being asked to do unnatural things. It’s uncomfortable and awkward and it makes me look at my other peripherals with a new appreciation.

Don’t get me wrong: Valve have clearly been thinking outside of the box, and the product is the most ambitious, fascinating controller I’ve ever used, doing things that no other gamepad could hope to do. But it demands so much time, so much faffing, and so much practise, that it makes playing games no fun at all.

Every time I play a new game with the Steam Controller, I go through the same rigmarole, over and over again. I either jump straight into the game because it has controller support, or I choose from one of Valve’s default Steam Controller options, and the outcome is always the same: I have to reconfigure the controller because it doesn’t feel right.

I can choose from a list of configurations created by other players and occasionally the developers, or I can just dive into the options myself and tweak, test and experiment. Usually, if I choose the former, I still end up having to make a few changes. Then it’s back into the game I go, more often than not to discover that, despite my fiddling, I’ve still not hit that sweet spot. 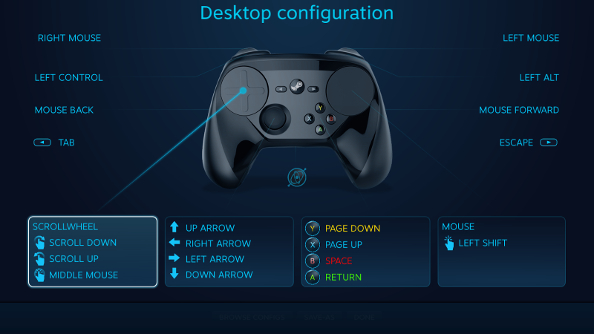 Maybe there isn’t a sweet spot. The biggest problem is the right trackpad. It’s situated where you’d normally expect to find the face buttons – on the Steam Controller they are awkwardly placed below and to the left of the trackpad – and is actually quite impressive… for a trackpad. But when it comes to emulating a mouse or a analog stick, it’s nowhere near close enough, and I don’t think any amount of tweaking will change that.

When I want the trackpad to act like a analog stick, I can mess around with a vast array of options, changing the deadzone, sensitivity, smoothness, swipe duration, haptics – the level of customisation is mind-boggling – but I can’t change the fact that my thumb is gliding across a slightly concave surface instead of pushing, pulling and nudging a stick. It feels completely different, no matter what settings I use. I at least expected the controller to be an improvement over my regular console gamepads, but it isn’t. It’s better at pretending to be a mouse than an Xbox controller could ever be, but in games that take advantage of the right thumbstick, it’s no substitute.

Using it as an alternative to a mouse and keyboard is still an uneven experience, though. In strategy games, specifically turn-based, it actually works surprisingly well. In Endless Legend and Civilization, I honestly have few complaints, and even Total War, with its real-time battles, is functional. It takes some getting used to, and frankly I don’t have much of a desire to play these games in my living room, but if I want to, I can. 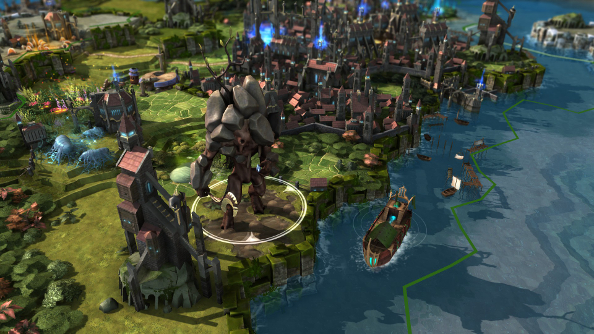 Games with very simple controls, like 2D adventure games such as Technobabylon or RPGs like Undertale, fare extremely well, since there’s no need for speed, precision or complex configurations. When I jumped to three dimensions, however, problems returned. The trackpad is perfectly serviceable when it comes to controlling a cursor, pixel hunting, navigating menus and controlling units and armies, but when it’s tasked with manipulating a 3D camera, it starts to feel very, very wrong. The firmness and feedback I’ve become so used to when using a thumbstick, or the fine control I have with a mouse, it’s all gone.

It wasn’t until I fired up an FPS that I truly realised just how much a strange controller could ruin a game for me. Bloody. Hell. It’s exhausting. To play Wolfenstein: The New Order, I spent around an hour just mucking about in the configuration menu (on Steam, not in-game). I went through a few user created profiles, none of which felt natural, and ended up using my own custom configuration that I still wasn’t happy with.

Every step of the way, I encountered problems. The unusually positioned face buttons mean that interacting with objects, jumping and crouching is just a bit more hassle than you’ll be used to, and for people like me with slightly dainty hands, it’s quite uncomfortable. But once again it’s the trackpad that’s caused me the most frustration. Even after a lot of practise, I’m still frequently overshooting, simply because my thumb does not offer the same or even close to the level of control that my hand on a mouse does. Are there solutions to this problem? Maybe… but they are a bit odd. 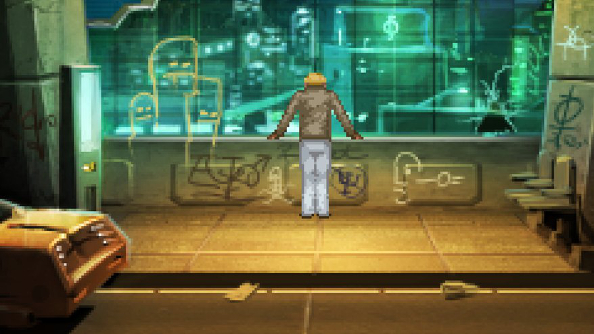 Take one guide on Steam, for example. This very detailed set of instructions is for people who want to play an FPS using the controller as well as gluttons for punishment. Here’s an excerpt:

“The key to understanding the proper grip for using the right trackpad like a mouse is this: there is no proper grip. You’re going to have to let go of the controller and let it rest in your lap. Your hand needs to totally relax, let the controller just lie on top of your fingers.”

So to use the Steam Controller in an FPS, according to this guide, you can’t use it like a controller at all. You might as well get a little tray or tiny portable table and just bring your mouse and keyboard into the living room. Here’s another piece of advice, which should clarify exactly why you should rest the controller on your lap:

“For aiming with just the trackpad: don’t just move your thumb, move your whole hand and arm, kind of like you’d do with a mouse. Also, relax your thumb and keep it relaxed, and don’t ‘claw’ up, or your hand will start to cramp quickly.” 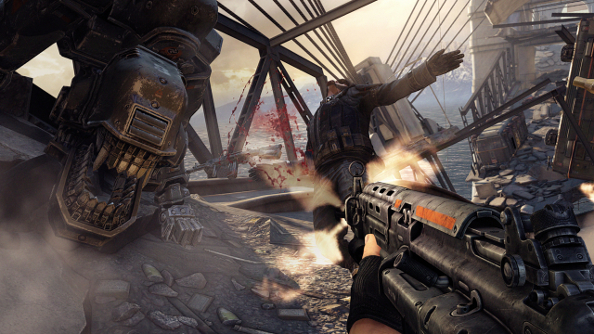 When I first read this, it made some sense. As I said earlier, one of the most glaring issues is that your thumb and the trackpad cannot emulated the full range of movement you get with a mouse, where you employ your fingers, hand, wrist and arm. So this control method sounds like a pretty great idea. Then I actually tried it.

It’s an extremely alien way to hold (or not hold) a controller, and it still doesn’t feel remotely like using a mouse. Wolfenstein didn’t become any easier, but I did look like more of a tit, so there’s that. Ultimately, it just wasn’t comfortable, and that’s one of the main reasons why I’m here, sitting in my living room, rather than being stuck at my desk in my office.

There are less unusual suggestions as well. In the same guide, and this is echoed elsewhere, including by Valve, the gyro is recommended. Yep, we’re in motion control country now. Not controversial opinion: motion controls are about as pleasant as the biological catastrophe that is the inside of my bin. I did not want to use the gyro, because the idea of sitting up straight and flailing around like a lunatic just doesn’t appeal to me. But the gyro is actually quite good, as motion controls go. It’s highly customisable, and you can make it context sensitive as well, so it won’t register every movement you make.

For FPS games, Valve advise users to make use of the trackpad for more extreme camera movement, and the gyro for precision aiming. It’s not a terrible solution. It’s certainly better than not using the gyro at all. But it also ends up creating new issues. The most serious one for yours truly is the fact that it’s a bit stressful. I always have to be on, managing two camera control methods at the same time. My brain takes time to catch up because I’m old and decaying. It also means that I can’t sprawl out on the sofa or get comfy, because I have to be ready to spring into action. And, ultimately, it’s still a very long way off replicating the precision of a mouse. 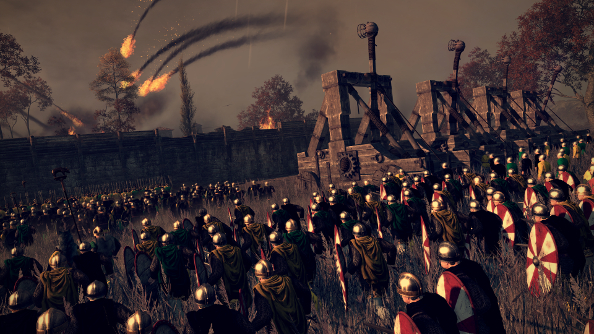 The Steam Controller tries to be everything: a mouse and keyboard, a gamepad, a motion controller – but it rarely excels at anything. Its strange design and layout mean that it will never be the sort of device that you can just pick up and have it working perfectly, and it requires perseverance and a huge amount of trial and error. That’s a lot of hassle, when I already have other devices that require no effort to use at all.

It could be that I’m stuck in my ways. The original PlayStation and Xbox controllers and, in particular, the N64 controller also felt bizarre when I first used them, but I learned to love them. I was more willing to change then, perhaps, but the situation was also very different. They were a lot less complicated, for one, but more importantly they were the sole controllers for those platforms – there were no alternatives, really – and it was easier to get used to them because they didn’t dramatically change from game to game. The Steam Controller, on the other hand, is one of countless devices I could use with my PC, and I have to change how I use it each time I load something new.

The more I use the Steam Controller, the more it feels like hard work. Yet I’m glad it exists. It feels like a bold experiment, a novel device that admittedly doesn’t really fit in, but attempts to do some very impressive things. And for better or worse, it is very, very PC. It’s complex, overflowing with customisation and its future depends, really, on the community that continues to test it, experiment and come up with configurations for mountains of games. It’s not for me, though; not remotely. And I think I’ll be removing it from my coffee table and shoving it into a drawer somewhere very soon.