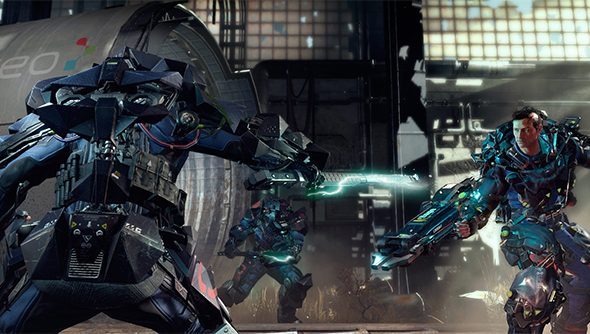 As if the concept of men dressed in mighty robot suits doing battle wasn’t enough to sell you a game, publisher Focus Home Interactive has decided to treat those keeping track of The Surge to a brand new trailer, pushed at E3.

E3‘s still going, and we’re still covering it with gusto. For all the latest PC gaming news, check out our homepage.

The latest video kicks off with a mean and moody voiceover talking of a world “slowly roasting under the solar rays”, and how the men in metal suits doing battle are the “cog’s in the government’s machine”. Yes, it all sounds a little dark.

But while the pitch might be a little macabre, the action is not. Snippets of gameplay included in the trailer suggested the battles – which look like they’ll make up the core of this forthcoming action RPG – are frenetic. One thing The Surge also looks to be is mighty beautiful. Developer Deck13 has gone all out on the realism front, and looks like it’s hit jackpot. Seriously, look at the lighting on this thing.

If you’re unaware, The Surge – which isn’t due until an unspecified date in 2017 – tells the story of the CREO, a body created to save the world. Unfortunately for its members (that’s the guys fitted out in the exo-suits), things appear to go horribly wrong, and its your job to get the bottom of just what happened to the CREO and what can be done to put things right.

Gameplay wise, players will be able to attach various weapons to their suits as they progress, while “limb targeting mechanics” in battle are being talked up by developer. Seriously, ripping off rival’s arms is apparently a thing. I think we can safely say that’s something you shouldn’t try this at home. Well, not until The Surge hits PC, Xbox One and PS4 next year, that is.

For now, feel free to let us know your thoughts on the trailer in the comments below.