After 30 minutes of hands-on time with Deck13 Interactive’s upcoming action-RPG I’m confronted with hard evidence that The Surge is indeed a Dark Souls clone. I die after rounding a corner and finding myself under attack from three enemies at once – sound familiar? I then respawn in a room with multiple doorways just begging to be opened at a later date, but while I’m poking around this safe zone the developer watching over my shoulder prompts me to head back to where I was killed to collect my Tech Scraps. If you die again, they disappear for good, but there’s a neat twist: each enemy avoided on the way back to your body further diminishes the return for recovering the pile of levitating scrap metal. You’ll want to pick as many fights as possible to preserve your scrap, then, since it’s the game’s currency for almost every aspect of developing your character – sort of like Souls, I guess.

Here are some other features that The Surge and Dark Souls have in common: the combat is hard as nails, the world is totally open and links together via shortcuts and miniature hubs, there are almost no cutscenes or intrusive cinematics to speak of, but plenty of climactic boss fights and an emphasis on grinding mobs to improve your character. The key similarity however, is that just like Dark Souls, The Surge is an absolute blast to play, even if it lacks some of the finesse and gothic brilliance of a Miyazaki game. 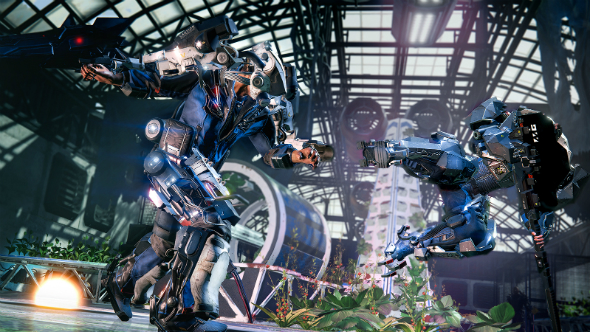 Deck13’s creative director, Jan Klose, isn’t a fan of the comparison. “We were not comparing ourselves to the Souls series but more to Lords of the Fallen,” explains Klose, “surprisingly, many people don’t say that The Surge is a science fiction Lords of the Fallen, but instead they say it’s a science fiction Dark Souls – it’s like, come on, we already did that game, we’re trying to evolve from that.”

Certainly, Deck13 have lavished The Surge with additional features that lend the gameplay and RPG elements some vital individuality that was painfully absent from Lords of the Fallen. Then there’s the setting, a near-future industrial facility in the aftermath of an unknown catastrophe – it’s a far cry from the primordial gods and men interplay that dominated Lords of the Fallen. “The world itself is a projection of things to come. If things don’t go so well in the next couple of years… well, the less said about that the better,” says Jan Klose, picking his words with extreme prejudice. “We don’t know about that, but the idea was simple: what would happen? So we painted a picture of a very grim near-future world, but one that’s still credible and still evolving from what we see today.”

The Surge casts players as a man who’s just got a prestigious job at CREO Industries, a company that’s attempting to fix some of the world’s biggest problems like climate change. Something happens and you awake amidst the ruins of the facility: your coworkers are now little more than shambling lunatics in exo-suits, drones patrol the wreckage seeking to kill any organism they find and your job is to survive while piecing together what exactly went wrong. 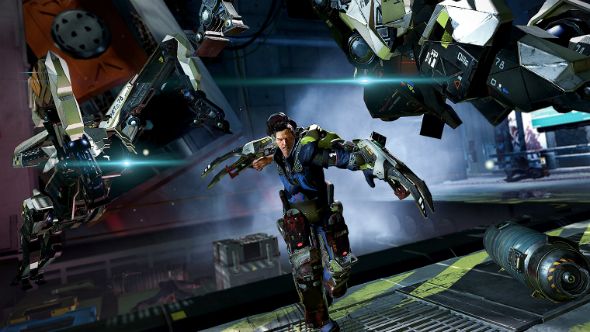 That shift in setting ties into the gameplay in a way that few games manage so organically. Gear is an essential part of character progression in The Surge: new gear needs to be crafted, and in order to craft each piece you’ll need to acquire materials and similar pieces of armour from enemies you encounter around the ruined factory. It sounds like farming, but instead of hoping random pieces of rare equipment fall from mobs, you find the enemy with the piece of gear you want, target the limb it’s attached to and bludgeon, slice and stab away at it until your opponent is dead and you’ve got a new bit of kit or at the very least some of the material needed to build it yourself.

In the hour I spent with The Surge I managed to swap my rudimentary pipe out for a chainsaw-cum-sword, craft an entire set of armour, and then half of another set of armour. Doing so took a lot of limb-lopping. But targeting an armoured limb comes at a price: rather than going for a vulnerable spot like the head and gaining a quick kill, you have to suffer severely reduced damage for the reward of a new gauntlet. Keep in mind that you might need to collect several such gauntlets to craft one for yourself, and that means tackling an entire area of the game at a much harder difficulty in order to make your character marginally stronger. It’s a grind sure, but so is repeating boss fights and farming Silver Knights in Dark Souls 3 – both games manage to marry their RPG elements to their respective game worlds, and developing your character in both games is exquisitely addictive as a result. 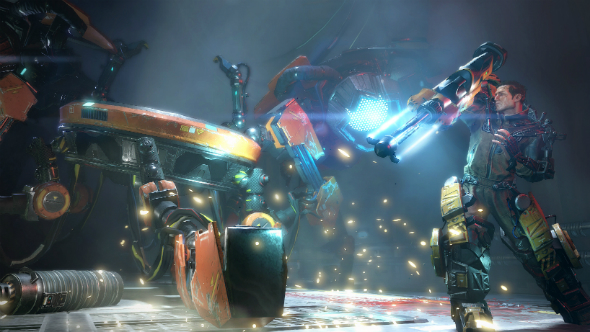 The story is much the same for The Surge’s combat, which hides a great deal of nuance behind its overtly familiar dueling mechanics. It’s all about options in gameplay. Targeting limbs opens up one set of choices, but you can also omit this step entirely and maintain only a general lock on your target. This is slightly less effective than attacking a weak spot, it also won’t net you any specific reward, however it does allow you to attempt a backstab and quickly swap between targets when facing a group of enemies, offering you a greater degree of control when it comes to taking on the myriad dangers of CREO Industries. Gory finisher moves and slow-motion action camera angles add a sense of decadence and joy to combat, and while they might not satisfy quite like the Dark Souls riposte, they’re still a thing of beauty that you’ll find yourself replicating over and over again for no tangible gain.

There’s still something clunky about the exactness of dodging and striking, an unfortunate leftover from Lords of the Fallen that makes confronting familiar foes a little too unpredictable. Additionally, the animations aren’t particularly readable, which can make learning the attacks of new enemies far too difficult considering the relative ease of overcoming most foes in the game.

There’s a very good reason that The Surge can’t seem to escape comparisons to FromSoftware’s franchise, and it’s a simple one: it borrows relentlessly from it. But more so than Lords of the Fallen, The Surge is doing that comparison justice. And when you’re being favourably compared to one of the most evangelized, revered and refined franchises in recent memory, you’re doing plenty of things right.

Bursting with excitement for The Surge? Let us know in the comment below.