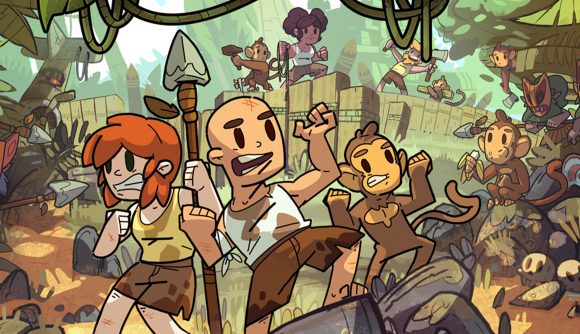 If trying to bust out of prison has put too much stress on you in your sandbox games, Team17’s The Escapists is taking a picturesque turn toward island life in The Survivalists. But there’s still that whole problem of survival to deal with. The Survivalists was announced as part of Nintendo’s indie Switch showcase today, but it will hit Steam, too.

You can probably guess the basics of this survival game – you’re stranded on a procedurally-generated island with a variety of biomes that’ll challenge you to hunt for food and seek out new materials to craft tools and structures. You’ll get some direction with quests from a ‘mysterious stranger,’ or similar tasks that you’ll find washed up on the shore.

The Survivalists offers four-player co-op, but you can also train the island’s monkeys to help you out. The simians can be trained in occupations like builder, lumberjack, or soldier to help you automate lowly tasks like chopping wood or making war on the locals.

You can check it all out in the trailer below.

The Survivalists is scheduled to hit Steam – along with Switch, PlayStation 4, and Xbox One – in 2020.