The Swindle is a giant box of things that I love. It’s a cyber-steampunk game of stealth and sticky fingers set in a cartoon facsimile of 19th Century London, where blimps patrol the skies and robot bobbies protect the streets.

I expected to be giddy, a grin plastered on my face at all times, but something about the way it’s been put together has made me ambivalent. I like The Swindle, but sometimes I hate it even more.

In the Swindle, you play a neverending roster of thieves attempting to put a halt to the activation of a new AI. Good old London has a crime problem, and Scotland Yard’s solution is the aforementioned AI: The Devil’s Basilisk. The ominously named system will make crime extinct, and we can’t have that, can we?

The Devil’s Basilisk comes online in 100 days. That’s 100 days of criminal capers, all in an effort to get enough money and tools so that the Police District can be infiltrated and the AI shut down for good. 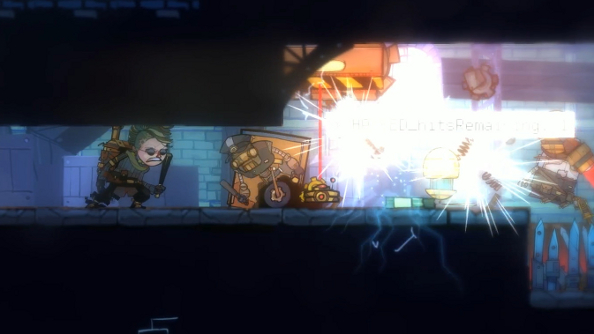 In my attempt, a lot of good thieves died on the way.

Hettie Stealer – Blown up by a mine mid-deactivation. £0.00 lost.

After dead thief number six, I stopped taking notes. It’s a good thing too, because I don’t think I could cope with writing down the huge sums I lost later on. The Swindle is as much a game about thieves dying as it is about stealing lots of lovely money, and spending too much time grieving their passing is pointless. They lost me so much cash, the bastards! 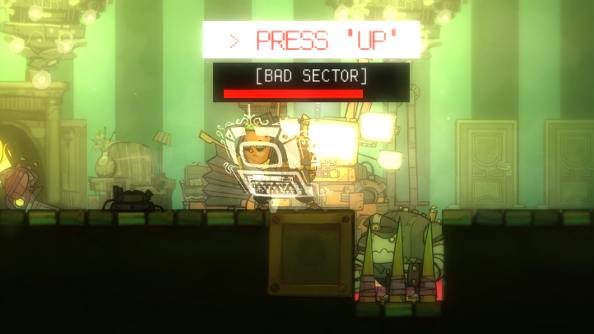 When a thief dies – and your thieves will, trust me – then you lose everything. Not just the cash they are carrying, not just their experience, but the most precious commodity in the whole game: time. You can only carry out 100 heists, and every death makes that number shrink.

“It’s fine,” I’m sure you’ll think to yourself, “I’ll just be more cautious than that wildcard, Fraser.” You will no doubt find, just as I have, that caution goes out the window when you’re consumed by greed. You see, The Swindle has a devilishly cruel way of tempting you with greater rewards.

Just go a bit further, you can see the vault, it’s so close. A few more steps and a tiny jump over a pit of spikes and you’ll be showering yourself in loot.

And then you’re dead. Again. 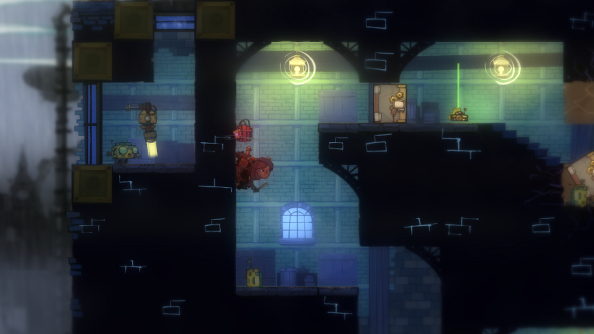 Death is not desirable, but the moments when you’re teetering on the edge and all hell has broken loose, well they are brilliant. You’ve been spotted, walking right into the field of view of a robot or a drone, and the alarm has been activated. The police are coming and, if you’re in a later district, security measures are being kicked into action. Metal walls are coming down, sirens are blaring. But you still have time, don’t you. Enough time to grab that bit off cash that’s only just out of reach? Enough time to hack the vault computer? Maybe, but enough time to do that and escape scott free?

If you make it, god it’s great. That feeling of sticking it to the robotic bobbies, of almost dying but managing to escape, with all the loot, and buggering off in your ramshackle escape pod. It’s like that glorious second just after you’ve gotten over being winded and can finally breath.

Those moments are what make particularly challenging games so compelling, but the way in which The Swindle creates challenges is more frustrating. Most of the time, greed will be your undoing, as it has been mine, but not far behind are the many times you’ll end up being undone just because the game’s a bit of a dick. 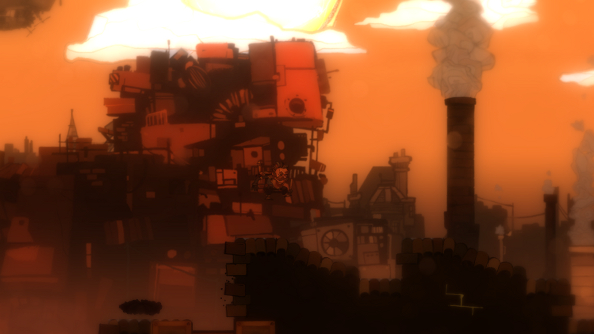 A successful heist really requires money to have been poured into unlocking upgrades, of which there are a lot. Double jump, teleport, melee upgrades – they range in cost widely, though all are pretty pricey. The most important upgrade, however, is undoubtedly hacking. You’ll need it to hack vaults, mines, doors and security systems, and it’s completely impossible to complete a heist without it.

Guess what you don’t start with on your first heist?

It’s bizarre. You simply cannot finish your first heist. If you’ve got bad luck, you might not be able to finish your second, either. You need to collect scraps first, tiny amounts of cash to get you to £100 and your first hacking upgrade. Unfortunately, this sort of thing continues throughout the game. Indeed, the first heist and most subsequent ones will probably contain inaccessible rooms that can only be opened up with bombs. The cost of a bomb upgrade? £5,000.

Each building is procedurally generated, so at first I wondered if this was a bug. Nope. It’s by design. The Swindle is actually full of impossible situations. Early on, I lost track of the number of times I simply couldn’t finish a heist, not because I buggered up, but because it was impossible since I didn’t have the appropriate upgrade, and couldn’t get that upgrade that early into the game. 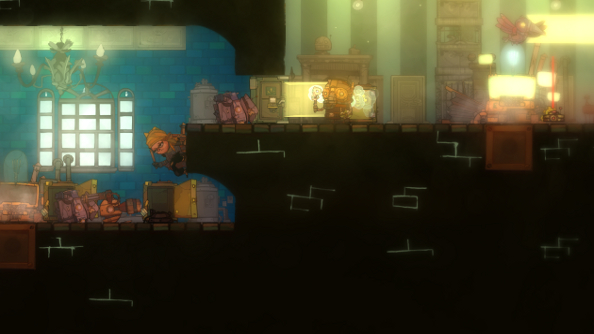 Worse are the impossible situations that no upgrade can save you from, forcing you to terminate your thief and waste a day. And that day really is wasted. Every day lost makes the game that little bit harder, giving you less time to amass the fortune you need to take on the final heist before the timer is up.

All of these problems would be washed away were The Swindle’s heists not fleeting, here today, gone tomorrow capers. Adventure games, RPGs and, in particular, Metroidvanias have been putting seemingly impossible obstacles in our way for decades, but the key difference between them and The Swindle is that the latter’s levels are completely disconnected and can never be returned to.

While these issues can be attributed to design missteps rather than a problem with the procedural generation, that has its own eccentricities, though not always bad.

Each thief’s name is a delight. You’ve seen a few already, in my list of failure, and they never fail to elicit a chuckle. The street names, too, can roll of the tongue in the most silly of ways. And both are randomly generated. But that’s all window dressing, so what about these procedurally generated levels?

They are a mixed bag. 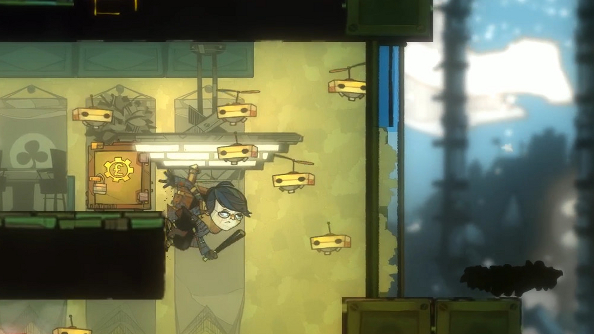 Sometimes, you’ll get something wonderful. A tricky, trap-filled building full of guards and security systems that you’d swear had been designed by hand rather than conjured out of magic and numbers. I’ve played through some of the best procedurally generated levels I’ve had the good fortune to sneak through in The Swindle, but balancing that out are some really terrible ones.

A small army of robotic ruffians and traps and sensors all protecting… nothing. It’s not an uncommon sight. Sometimes appearances can be deceptive, and they’ll be guarding somewhere that leads to the place you really want to get to, but often they’ll just be there for seemingly no reason. More common are the empty rooms split off from the rest of the map, or a single room, buried under lots of stone, guarded by one bot. What’s he guarding? Maybe bugger all.

Other rooms are almost like showrooms, displaying every single obstacle and enemy in the district. Getting through such a room is like smashing your head against a brick wall, very, very slowly. It’s a challenge not because of clever design, not because it’s a puzzle, but because it’s just full.

The very next building might be perfect, though. Difficult, complex, but ultimately a fun challenge that can be overcome without simply hoping for a spot of good luck. It’s hard for me to reconcile such levels with the terrible ones. 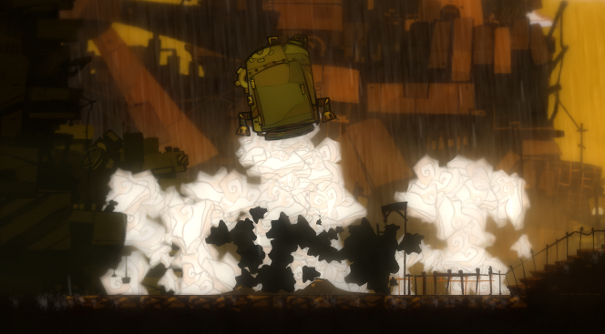 Rooms repeat a lot, too. With 100 potential missions, things start to become very familiar, so you repeat whatever got you through the room last time. Hack the door, knock out the drone, disarm the mine, hit the robot, jump over the spikes. Go through the motions.

The impact of this is softened considerably, however, when you reach a new district and more complexity is added to the levels. Within a given district, things do ramp up in difficulty, but quickly it settles and you’ll be facing the same scenarios again and again. Reach a new district, however, and you’ll face brand new traps, new bots and security measures and even changes to what happens when you’re discovered.

New upgrades can change how you deal with a room you’ve faced dozens of times before, as well. When you might go around smacking sentry drones with your blackjack at the start, come across the room again when you can hack security terminals, and you might just find a way to said terminal instead, turning the drones against their masters. 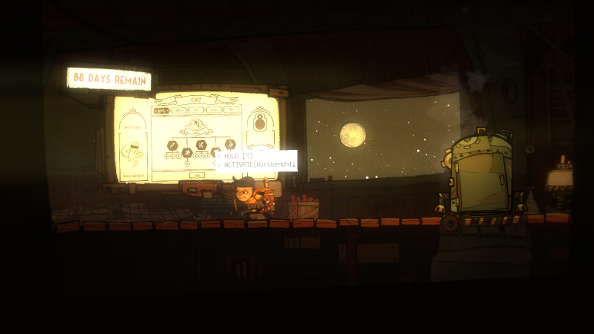 Repetitive though it can sometimes be, The Swindler doesn’t overstay its welcome. 100 heists sounds like a lot, but you’re unlikely to complete 100 full heists. Some might last less than a minute, while others might take 15 minutes. And if you earn enough money to unlock lots of toys, then you’ll be well-armed to beat away the sense that you’ve done it all before.

It doesn’t inspire another playthrough either, however. I’ve swindled enough.

It’s easy to be charmed though. Cyber-steampunk London is a bizarro city filled with wonderful retro-future contraptions and rustbucket robots and there’s a jaunty whimsiness that seeps into everything, despite the lack of actual characters or a story that goes beyond stopping the AI. It doesn’t look like the sort of thing you’ll end up swearing at in the wee hours of the morning after another thief has died.

Well, I’m still ambivalent, even after working through things in what has maybe become a longer review than planned. For the moments where the procedural stuff just works perfectly, creating a bastard-hard but ultimately memorable level, and for the world itself, which is lovely, The Swindle is worth dedicating a couple evenings to. It won’t steal your heart though.