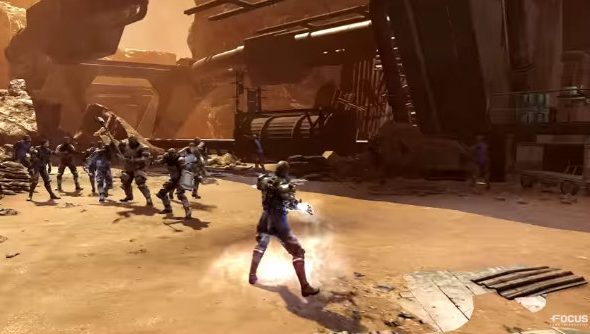 Casting you as an electrified warrior who works for the corporations on a warring Mars, The Technomancer has quite a distinct setting for an action RPG. The new trailer showing off all its features sure makes it look solid.

I’m not sure it’ll make it onto our list of best RPGs, but it looks worth a crack.

The latest trailer aims to teach us how to survive on Mars. Apparently that’s not done by drinking water and eating well – it’s all about twatting the mutated creatures in their tentacled faces with an electrified staff and flipping around the battlefield like a Jedi, firing electricity from your hands like a Sith.

Being an RPG though, there’s a big emphasis on choice. Do you want to creep through areas and take down enemies silently, set up traps and mines, or would you rather go in and give everyone a taste of your mace?

There will be skill trees for the three melee disciplines – sword and gun, staff, or mace and shield – as well as for your electrically-charged powers, on top of general stats. General stats govern stuff like sneaking and charisma, letting you silver tongue your way out of scrapes instead of introducing everyone to the end of you staff.

Have a watch of the new trailer:

The Technomancer releases on June 28, a week after its initial release date.