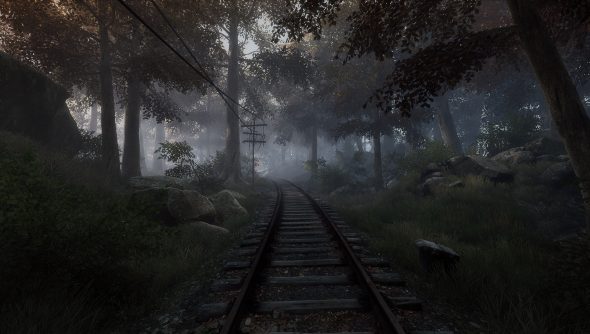 Paul Prospero was never going to be an accountant or a sales assistant – not with a name like that. He was destined to be a supernatural detective; Fox Mulder with a hint of Sam Spade. He’s on a job, is our Mr. Prospero, and of course it’s his last one.

Red Creek Valley is where he’s been called to, at the behest of the Ethan Carter of the title, a young boy in some supernatural trouble. As the title of this unsettling first-person adventure implies, however, Ethan’s not around to explain what’s going on or, rather, what’s already happened. It’s a good thing that Prospero has mystical powers along with his sleuthing skills, then. 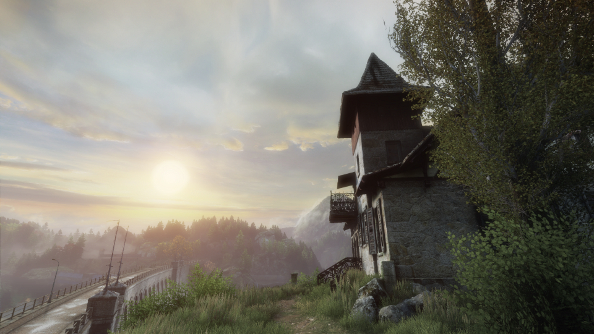 The supernatural world isn’t just what Prospero investigates – he’s part of it. With his occult magic, he gives the dead and the past a voice. Dotted throughout Red Creek Valley are a handful of murder scenes, grisly ones. With nobody to question and, at least at first, no real context, the only way to solve them is with a spot of magic.

Conveniently, there’s no need to consult arcane tomes or belt out spells in weird Enochian dialects. Prospero’s magic is simple, and everything he needs to find in order to figure out exactly what went down is confined to the area around the corpse. By finding clues, which are highlighted by floating chalky text, and “fixing” the scene by putting everything back the way it was prior to the murder, a series of flashbacks appear. Putting them in order is the final piece of the puzzle, and hey presto – it’s solved.

With developer The Astronauts swearing off providing guidance or handholding, the first of these extremely light puzzles is pleasantly tricky. Figuring out how to piece it all together and then seeing the effect creates a rewarding sense of accomplishment. It’s not actually, in terms of mechanics, all that different from the crime solving antics found in the wonderfully crap Murdered: Soul Suspect, but the execution here is far better. 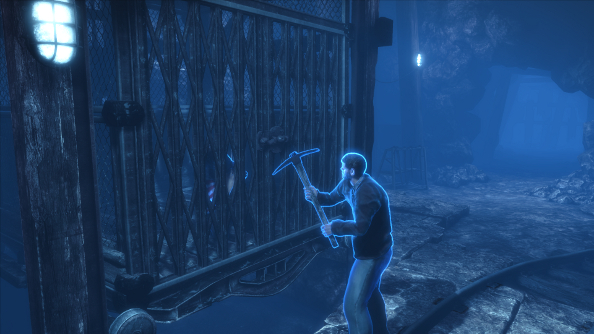 After this first murder scene, though, it’s downhill. Subsequent scenes have more obvious solutions, and the buzz gained from filling in the blanks dissipates. The driving force is not the puzzles, but the vague narrative and the beautifully constructed atmosphere – it is what those who are bored by it will undoubtedly call a “walking simulator”.

But what a world to walk in. Red Creek Valley is a lonely paradise. At times, I felt like I was looking at real footage of a real location, as the details are just so rich. It sort of is, actually. The Astronauts used photogrammetry to build exact 3D replicas of objects, buildings and even rocks from photographs. The effects are spectacular.

This verdant slice of American wilderness isn’t simply impressive due to its realism, though. A streak of horror and isolation flows through it, slowly building up, creating a game that simmers with tension. Punctuating the trek through the woods are Weird Tales, pulpy horror, sci-fi and fantasy yarns that defy reality and transform the gamespace, revealing a world that is not what it seems.

It’s in these Weird Tales that the two brain-teasing highlights reside. They are both inventive, and impress mainly thanks to their implementation rather than their traditional puzzle qualities. As I said, the narrative is the driving force, and so that’s what informs these conundrums, creating obstacles that are perfect for this bizarre world. Mechanically, they border on trite, but through horror, confusion and spectacle, they are elevated.

I genuinely loved exploring this disquieting universe that The Astronauts have conjured up, but sometimes I felt like I was simply a tourist and did not matter in the slightest. The story is intriguing throughout, but has already happened, and I found myself just picking up the pieces. It’s like getting to an incredible party after everyone has already called it a night.

Prospero’s insistence on being a mostly silent, stoic chap exaggerates this feeling. I’m a bit torn in regards to this, actually. I appreciate the “show, don’t tell” approach, and I can’t count the number of games when overly-chatty protagonists with tiresome internal monologues just left me exhausted, but Prospero seems like a man with something to say. The lines he does utter are classic, pulpy things, but seem awkward after so much silence.

In combination, these issues strip a lot of the agency away. And with there being no set order to completing puzzles or murder scenes – indeed, the murder scenes don’t have to be solved at all – it seemed like I was just wandering around a not-quite-open forest for my health instead of a desire to save Ethan.

There’s an illusion of openness, though the adventure is really quite linear with only a few things to discover, which results in a fairly straightforward path from beginning to end. The illusion is deftly created, thankfully, and the path is not awkwardly highlighted. That’s unless one needs to backtrack, which can occur if certain things are missed during the journey.

It seems a bit silly for The Astronauts to explicitly say, right at the beginning, that the game won’t hold your hand, only for you to get to the end and have exactly what you needed laid out for you. This simultaneously makes the “no handholding rule” look a bit poorly thought out and scraps it in one fell swoop. It’s entirely possible to not encounter this problem, though .

Like the unnerving fiction that inspired it, The Vanishing of Ethan Carter is a bold and fascinating story. But the story is something that’s revealed, not something that’s lived through. I was a tourist, a witness, a reader, and that left less room for being a player. Yet I expect the game to stay with me for a good long time, and its grisly, gorgeous world alone makes the trek worthwhile.