Update 4th Dec, 2015: Telltale have shown the first footage from the Michonne mini-series in a brief trailer shown at The Game Awards. The series will tell the story of Michonne during the issues #126-139 of The Walking Dead comics, when she was missing from the main story’s action. For the game, Michonne will be played by Samira Wiley, best known as Poussey in Orange is the New Black. The series will be three episodes long.

Original Story 3rd Dec, 2015: If you’ve read The Walking Dead comics or watched the AMC TV show, you’ll probably know who Michonne, the star ofTelltale’s upcoming mini-series, is. And you’ll definitely know at least two facts about her, like that she has a katana and – not unlike quite a few humans – a chin. But game developers sometimes like to make changes in their adaptations. Maybe Telltale will give her a giant foam finger instead of a sword and a third ear instead of a chin.

I’ve worried you now, haven’t I? Don’t be. Ahead of an announcement tomorrow, Telltale have teased part of a screenshot that should put your mind at ease. Direct your juicy eyeballs toward it, below. 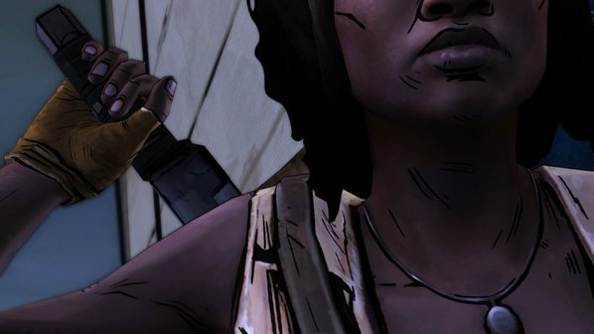 Yep, that’s definitely a regular human, albeit cel shaded, chin. And while we can’t be sure she’s about to yank out a katana and slice some zombies in half, her weapon could certainly be described as ‘sword-like’. It’s probably the machete that we’ve seen in previous images, like the one at the top of the page. What it definitely is not, is a foam finger.

The sneak peek is likely meant to be getting us all fired up for the bigger reveal later today, most likely during that Game Awards shindig which kicks off quite a bit after my bedtime.

Keep an eye out for more details tonight.