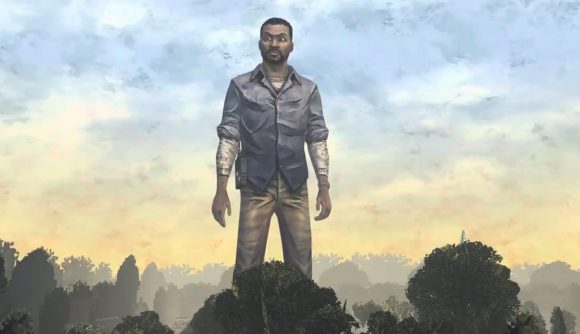 The closure of Telltale Games has brought out plenty of stories from former developers, revealing how some of the studio’s best moments came to be. But some of the best bits are those that never saw the light of day, like The Walking Dead’s original star blowing up to giant size and firing eye lasers at everything around him.

Former Telltale employee Shaun Finney left the company before its closure, but has decided to share some very goofy in-house videos now that there are “pretty much no consequences for posting” them. Take, for example, Lee sadly encountering an empty cupboard. He keeps looking and finding nothing, getting so angry he has no choice but to walk outside and go all kaiju on the neighborhood.

You can see that delightful clip below, but Finney also shares some more substantial clips from his time at Telltale, including an in-house video shown at the company’s tenth anniversary party.

Even bigger, there’s a 30 minute documentary on the making of The Walking Dead’s first season, though it apparently excludes project leaders Sean Vanaman and Jake Rodkin at the request of “the brass.” By the time of season two’s release, the two had moved on to new ventures with Campo Santo and Firewatch.

Rodkin and Vanaman are also responsible for an obviously unused sequence where Lee wanders around a store collecting bananas underneath a voiceover repeatedly saying “that’s the stuff.” The video was first revealed earlier this year, but it’s worth looking at again.

Now that there's pretty much no consequences for posting this, enjoy this dumb shit I made in the chore tool while I was at Telltale pic.twitter.com/uS532rXAnP

The Telltale shutdown has brought an outpouring of support from the industry and fans, as well as plenty of fun stories for former developers. But it’s also been a reminder about working conditions in the industry. A Game Workers Unite statement around the studio’s end providing some especially harsh words for studio leadership alongside a call for industry unionization.