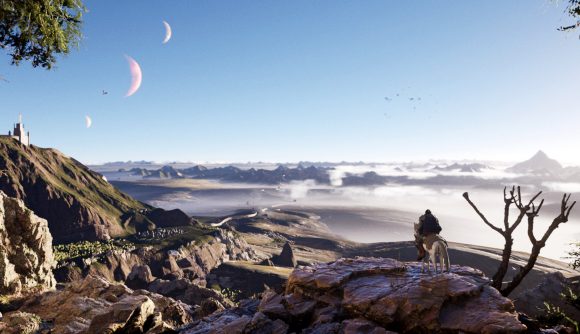 We’re still a long way from the release of The Elder Scrolls VI, but two of the lead developers behind The Elder Scrolls series have unveiled a new open-world RPG that could scratch that itch nicely – The Wayward Realms, which brings back the massive procedural worlds of Arena and Daggerfall.

It’s been a long time since we’ve heard anything from OnceLost Games, which announced a “spiritual successor” to The Elder Scrolls: Arena and The Elder Scrolls II: Daggerfall way back in 2019. The studio’s led by several key developers behind the Elder Scrolls series – Julian LeFay, Ted Peterson, and Vijay Lakshman.

All of them worked on programming and design for many of Bethesda’s earliest games, including several Elder Scrolls titles and The Terminator: Future Shock. Julian LeFay served as project leader on Daggerfall, and Vijay Lakshman was Arena’s lead designer and producer. The Wayward Realms certainly sounds closer to Daggerfall than Skyrim, boasting “one hundred realistically-scaled islands” that are rendered with “dynamic, procedural generation” – similar to the way the early Elder Scrolls games handled their huge worlds.

OnceLost describes The Wayward Realms as a “new class” of game that it’s calling a “Grand RPG” – with a special focus on “choice, consequence, scope, and role-playing”. The team encourages players to create character classes of their own, no matter how outlandish, with a virtual Game Master controlling the world and keeping things unpredictable.

We are thrilled to share our first teaser trailer and a look at the scope we aim to capture in The Waywward Realms. We hope it excites you as much as it excites us. https://t.co/LryL4sCNQR

It all sounds very exciting, but the one sour note is that OnceLost warns that none of this new info means the game is coming out anytime soon, so the release date could be a long way off – although hopefully not as far off as The Elder Scrolls VI, which should be out sometime after Fable 4.