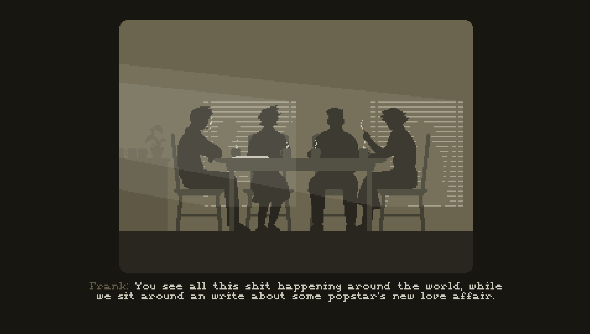 If you’ve been impatiently waiting for the next social commentary game in the vein of Papers, Please, then you’re about to read all about it. The Westport Independent is a game all about censorship: you play the editor in chief of a local independant newspaper, and it’s entirely up to you what makes the headlines, and how those stories are portrayed.

However, if you were planning on being a truly ethical media person, things may be a little tricky. Government guidelines dictate what can and can’t be published, and the stream of information feeding into your newsroom is clearly suspicious anyway. It’s entirely up to you to decide what propaganda, rumour, and truth to make available to your audience, and how you dress it up.

The Westport Independent started out as a game jam that was made in 72 hours for Ludum Dare 48. After gaining plenty of notice, developer Double Zero One Zero has decided to expand the concept into a full, multi-featured game.

The new version of the game will feature a management system to keep all your staff in check. The city of Westport itself will play a much bigger role, changing dynamically as the population reacts you what your paper prints, which in turn will affect what news streams in via your journalists.

Your journalists are important, too. They have their own opinions on what’s going on in Westport, and have families of their own to protect. If they start having to write stories that go against their beliefs or that put their lives in danger, they may refuse to follow your editorial direction.

Double Zero One Zero are developing The Westport Independant for PC, Mac, and Linux. To get a taste, you can play the short original game here.