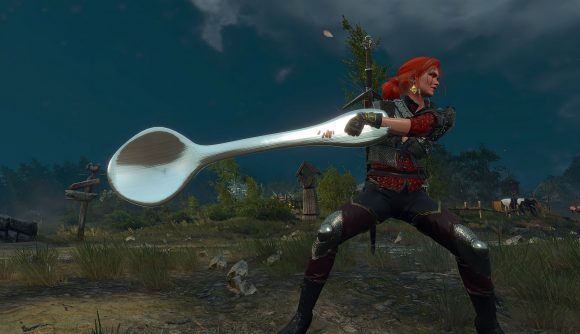 There are some dazzling The Witcher 3 mods out there. The RPG game’s extensive and ever-growing catalogue includes HD reworks that make its visuals even more alluring, handy fast-travel overhauls, and even a mod that turns The Witcher 3 into its original E3 style demo. And then there are those that are just. Really. Good. Fun. Flun007’s ‘Comically Large Spoon’ mod is one of them.

The modder asks a good question in the (very sparse) mod description: “Comically large spoon – what else did you expect?” Fair enough. Seemingly inspired by that ‘Funny Vine – Just a Spoonful’ clip, as linked on the page, the mod puts a giant metallic spoon the size of Geralt (probably) in the hands of the game’s valiant heroes, turning the humble utensil into a mighty, Mjölnir-like weapon to batter nekkers, rotfiends, and the grumpier folk of Velen with.

But the powerful new melee kit doesn’t come for free or magically appear in The Witcher’s inventory – you’ll have to buy it from the merchant found in White Orchard, the game’s starting area.

There’s no clip to check out of the mod in action, but you can get a good idea of what’s in store thanks to the images the modder’s included, like this: 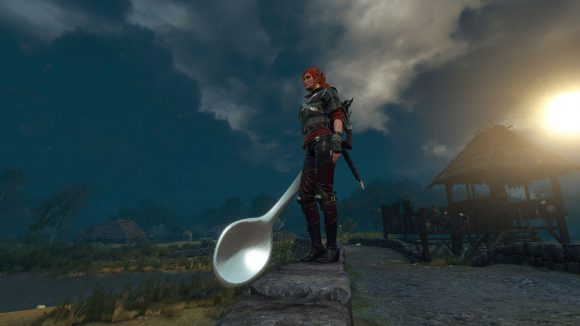 If you’re keen to bring what is surely the most majestic weapon The Witcher 3 has seen yet to the game, you can find the mod on Nexus here. As ever, mod at your own risk! And enjoy.