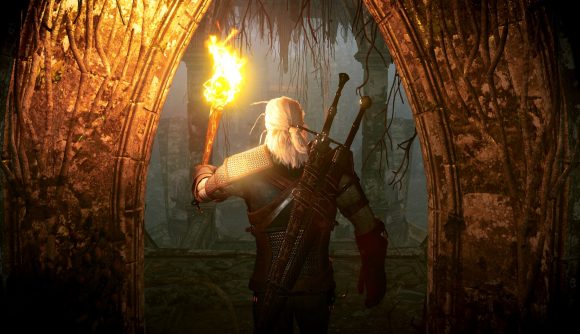 We recently heard that filming for the first season of Netflix’s upcoming The Witcher series has wrapped. Now, we’ve just got our first good look at some of the character’s costumes courtesy of some promotional shots that have emerged on Twitter today. The first, a shot of Geralt’s back, looks great – and happily for the game and books’ fans – familiar. The recreation of his studded Kaer Morhen brigandine is there – but look closer and you’ll notice something’s different from the games. His second sword isn’t there.

The first-look photos, uploaded by NetflixUS Twitter account See What’s Next, showcase actor Henry Cavill’s Geralt of Rivia against some atmospherically moody backdrops. They reveal an overall similarity in his costume design to what players have got used to seeing in CD Projekt Red’s the Witcher 3 – but with the exception of his second sword. In the game, Geralt’s dual swords are iconic. Both stay strapped to his back, visible to you throughout the third-person adventure. One is steel, for human foes, and the other silver, for monster-slaying. But in the Netflix images, we can only see one.

It seems that, as some have already suggested, that in this respect the series is following author Andrzej Sapkowski’s original books rather than the games, with CDPR having introduced the second (silver) sword as a permanent fixture on Geralt’s back. While one of the books, The Last Wish, indicates that all Witchers carry the two swords, users like BuzzmanArt on Twitter say that the silver sword is usually stored on Geralt’s horse Roach. As we know that the series is based on the books rather than the game, this makes perfect sense.

In another picture posted by series showrunner Lauren S. Hissrich, we can see another small difference to the game’s costume design – Geralt’s Witcher medallion is a flat round pendant embellished with his wolf emblem, rather than the 3D wolf head gamers are used to. This ties into the series logo art, which you can see below.

Other images included in the Netflix post are promotional shots of Yennefer (played by Anya Cholatra) and Ciri (Freya Allan). You can judge for yourself whether their outfits areas you might expect, based on their characters in the books.

Role-play ready: Check out the best RPGs on PC

There’s still no word of a release date for the series, but we know that it’s due to drop sometime later in 2019. In the meantime, you can check out all the latest details on the upcoming Witcher 4, and get yourself ready for the hunt.