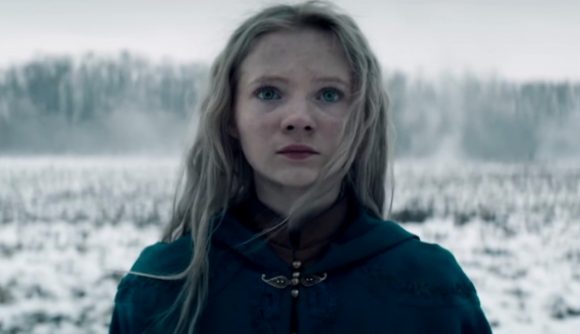 Netflix’s The Witcher series showrunner Lauren S. Hissrich has revealed an alternative ending to the show’s first season which could have seen it closed out with a lengthier version of Geralt and Ciri’s meeting. The brief scene ended with a key question that will surely unlock the beginning of The Witcher season two, but it seems it was cut down as part of it “didn’t feel earned.”  Look out for spoilers ahead, folks.

Hissrich recently posted a tweet revealing the “original final scene of Ep[isode] 108, Much More” with an image of its screenplay. She says this reflects the version of the scene that was filmed, but that it “was edited down later, because – as pointed out – [it] didn’t feel earned after we’d cut the Brokilon meeting.”

The difference, if you’ve seen the show, is pretty clear. The final cut sees Geralt finally meet up with Ciri in a forest by Sodden, fulfilling Renfri’s prophecy that “people linked by destiny will always find each other”. Upon embracing, the princess of Cintra asks The White Wolf an important question about the show’s leading sorceress: “Who is Yennefer?”

The screenplay’s version, by contrast, has more dialogue in which The Witcher is surprised to discover that Ciri is actually still alive and even expresses that Ciri is “much more” than his destiny. It even includes a rather poignant note: “And in that instant, Geralt knows one thing: he will never abandon this child.”

I LOVING #TheWitcher dialogue this morning. As a treat for all the respectful debate, here is the original final scene of Ep 108, "Much More." This is what was shot. It was edited down later, because — as pointed out — didn't feel earned after we'd cut the Brokilon meeting. pic.twitter.com/wyBEFV1F9b

In other The Witcher news, bard Jaskier’s song from the show, ‘Toss a coin to your Witcher’, has been recorded by a choir – and it sounds incredible. Plus, if you’ve been inspired by the show you can now replace Geralt’s face with Henry Cavill’s, thanks to this The Witcher 3 mod. There’s even an alteration for Yennefer if you’re keen to replicate the show further.