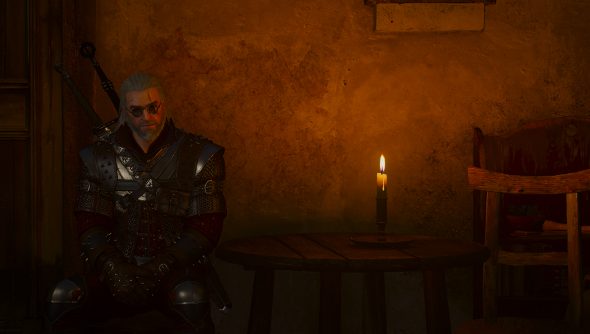 An unexpected realisation struck me recently, as the The Witcher 3: Blood and Wine’s energetic battle music settled down and I surveyed yet another mess of dead archespores, Toussaint’s annoying flower monsters. I’d have been happy to skip that fight, I thought. And then I took it one step further: I could happily skip the majority of Blood and Wine’s combat.

Already played The Witcher 3 and looking for another game? Check out our list of the best RPGs on PC.

What isn’t a surprise is that I thought this to myself after what seemed like my hundredth – but in reality was probably more like tenth – archespore fight that night. The duchy seems to be lousy with the monstrous flora, and they make for abysmal sparring partners. They pop up from the ground, you smack them, they go back into the ground and reappear elsewhere, you jog over and repeat the process. The disappearing act merely extends what is quite a dreary fight. 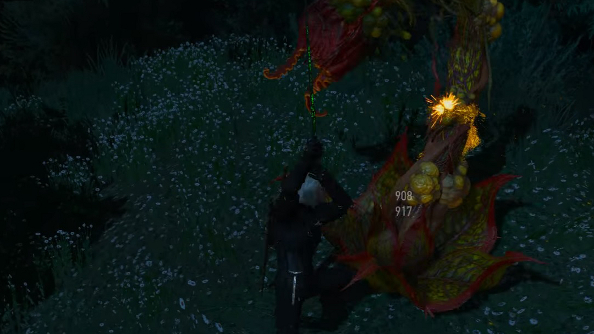 But it would be unfair to suggest that the archespores are the real reason that I’d enjoy the game no less with significantly less fights. It, and the giant centipedes – the encounters are very similar – are really the only truly annoying beasties, while the rest are, at worst, a bit simple.

It’s just that there’s so much combat in The Witcher 3, when actually it’s usually the stuff in between the combat that impresses the most. That’s not to say that the climax of a mystery, puzzle or epic quest isn’t elevated by a big fight – Geralt and all Witchers are fighters after all. But the game is gargantuan and the scraps many, and there are only so many wolves that I can slay without getting a bit sick of murdering woodland critters.

With Blood and Wine, the game is now approaching, or for completionists perhaps even surpassing, 150 hours long, and damn that’s a lot of dead bandits and banshees. Even action games with complex, nuanced combat mechanics clock in at around ten or 20 hours, but in The Witcher you’ll know just about everything you need to know about fighting in about five, with the following 145 hours employing muscle memory. 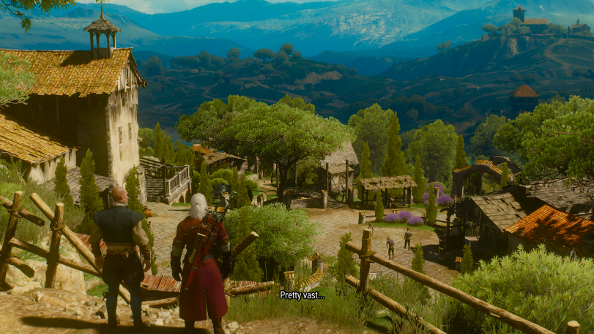 The less curated battles, the fights you get into while you’re running through the woods, don’t really scale with Geralt’s power, either. A level 40 bandit is the same as a level 10 bandit, with only their health and damage increasing. But Geralt at level 40 has so many tricks up his sleeve, whether it’s enhanced bombs, improved signs or fancy magical swords. It’s a stumbling block that so many sprawling RPGs encounter, in particular The Elder Scrolls series.

So they become repetitive, without challenge to elevate them. And this starts to threaten the integrity of the fantasy: that you are playing this grizzled, veteran monster hunter. What is Geralt doing, slaughtering animals and setting men on fire when there are powerful vampires and nasty flying reptiles threatening the world? Surely he has better things to do.

Here’s the thing: CD Projekt Red know exactly how to make an interesting fight. Even after 150 hours, monster contracts remain compelling because they still feel like events. The battle itself is the climax, with research, investigation and preparation all building up to it. The monster has to be studied and hunted down, Geralt has to prepare potions and bombs and oils, and after all that there’s often a surprise. Maybe the monster doesn’t need to be killed. Maybe there’s more to this story than it at first appeared. 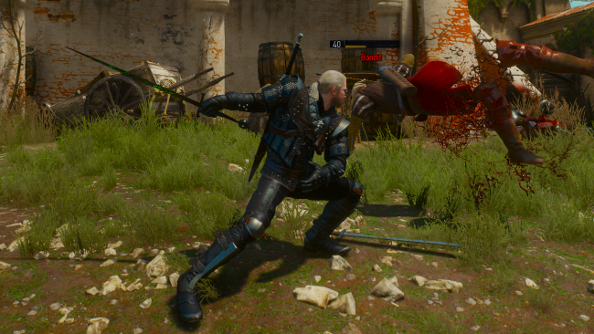 Even a fight with a monster you’ve killed dozens of times before has the potential to be something more interesting. Take the quest where Geralt’s getting a painting made, for instance. It’s a fun, sedate quest with Geralt helping a painter find his tools before he chooses a pose and gets his sexy image immortalised. But as he models, a griffin attacks. The fight itself isn’t all that memorable, but the surprise, the reaction of the painter, and the fact that the dead griffin ends up starring in the finished painting, all go toward making the battle more than just a forgettable scrap.

The effort that’s put into quest fights and the way that The Witcher 3 frequently defies tired genre conventions makes the filler scuffles all the more dull. Every time I encounter a bandit camp, I’m very aware of the fact that this time could be spent doing something a lot more entertaining. Geralt’s adventure doesn’t need filler. It’s already massive, and it’s not Fallout 4, where random acts of violence are the main way you interact with the world. 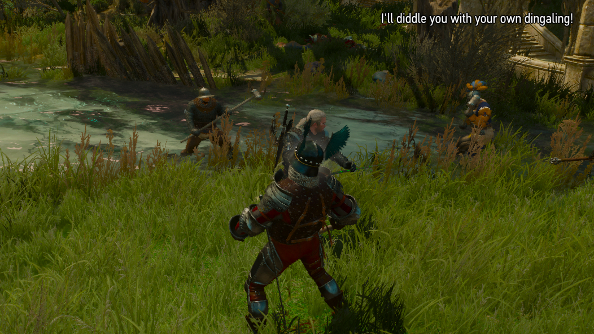 When The Witcher 3 does what we expect an open-world RPG to do, it’s disappointing. The hanses – bandit strongholds – almost lost me for a while. They’re ruins filled to the brim with robbers and thieves. You go in, kill a hundred blokes, and that’s you done. The only challenge is managing the large number of men with swords trying to chop your head off. Incredibly, they’re somehow even less involved than the same types of missions you’ll find in, well, pretty much every open-world Ubisoft game you’ve played in the last decade.

In the base game and Hearts of Stone, I consumed everything that was offered. A question mark on the map, a red spot on the minimap – I headed toward them all. Now I’m too tired. I ride past those dots, wonder if that question mark is just going to be a bunch of ghouls again and if I should just ignore it. But by doing that, I’m gripped by the fear that I’m missing out. I know well enough that CDPR like their twists and surprises. What if that ghoul nest is actually just the start of another fascinating adventure?

If it seems like I’m picking on The Witcher for something that other games do a lot more frequently, and without the benefit of significantly more enjoyable alternatives, it’s only because it’s better than that. Not only is it a lesson in how to craft brilliant quests, it’s also a lesson in how to build an open-world that respects players’ time. Largely. So what filler does exist is all the more noticeable. 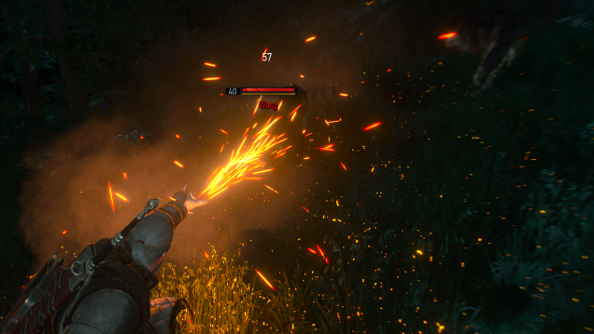 A narrative mode like Mass Effect 3’s, on the surface, sounds like a potential solution, but that just made combat trivial, which is the opposite of solving the problem. Same number of fights, but even less challenging – it’s not remotely tempting. And it would only make the encounters that are already great lose their intensity.

If you were expecting me to end this with a really good idea, a way to fix this flaw, I’m going to have to disappoint. The issue has so many factors – the game’s length, combat mechanics, enemy design – that there’s no one-size-fits-all cure. Scrapping the last vestiges of the open-world model would be a good start, though.