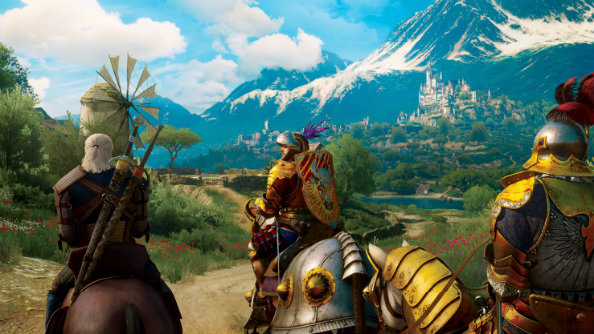 The release date for The Witcher 3’s final expansion, Blood and Wine, has been announced. We’re about to take our last journey with the long, flowing hair, the constantly growing beard and the gravelly voice of Geralt of Rivia, but what will be waiting for him in the new land of Toussaint? Read on to find out how this region vastly differs from Velen, Novigrad and the isles of Skellige, along with all the new gameplay tweaks like owning your own vineyard.

Prepare to say farewell to one of the best RPGs on PC.

Keep checking back, as we’ll be updating this article with things like the starting level and quest requirements once we know more.

Update 19 May, 2016:A new trailer has been added to the relevant section, and it shows us just what type of oil we’ll be needing the most of in the new expansion.

It’s right around the corner. The Witcher 3: Blood and Wine releases on May 31, and you can currently grab it on Steam at a small discount, picking it up at 10% off, for $17.99.

The Witcher 3: Blood and Wine trailers

The first teaser for Blood and Wine has been released and it teases the land of Toussaint – both its beauty and its dark side.

CD Projekt Red have also released a developer diary that digs into the characteristics of this new region, explaining the politics, the people and why wine is the lifeblood of the land.

A new trailer has released to show off more of the land of Toussaint, a place of fairy tales. The first half of the trailer shows us the holiday brochure version of this new region, while the second half focuses on the threat Geralt will be facing.

It’s the longest look we’ve got of Geralt’s new foe, and I’m guessing it’s some sort of vampire – maybe even THE vampire. Patient zero, if you will. Have a watch:

Vampires confirmed, then. The Witcher 3: Blood and Wine just got its launch trailer and it shows off multiple sharp-fanged, neck-biting beasties. Also, actual bats. Other than that, it’s a few sweeping pans of Toussaint and more of a look at the fighting arena, all backed by questionable music. Here it is:

CD Projekt Red have released the expansion’s main theme, which you heard snippets of in some of the trailers above, but the full thing is suitably epic. Composed by the original music director Marcin Przybyłowicz, the track includes vocals by Laura Doddington and Jessica Jeza Vautor. Listen to it in the video below:

The Witcher 3: Blood and Wine size

According to CD Projekt Red, the expansion provides over 30 hours of content. Yes, it’s bigger than most actual games. It was originally planned as a 20-hour experience, but the developer got a bit carried away. We’re not complaining.

Apparently the actual landmass of Toussaint will be big too. How big? At least as big as Novigrad, Skellige or Velen. The new region “rivals the size of those found in the base game,” according to Michal Platkow-Gilewski, CD Projekt Red marketing lead in an interview with Gamespot. 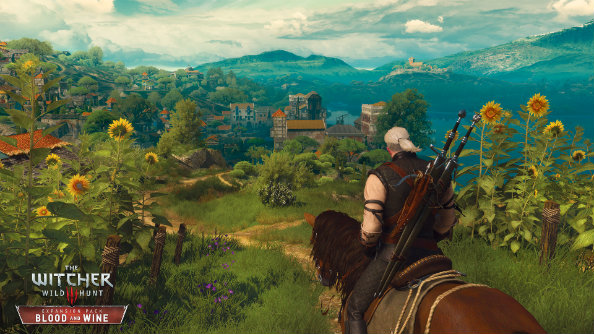 The Witcher 3: Blood and Wine update

Before the release of Blood and Wine it might be a good idea to clear some space on your hard drive, as there will be an 10-15GB update to download, revealed CD Projekt Red community manager Marcin Momot on Twitter. It isn’t clear whether this is the size of the expansion or if this is just an accompanying update. We will update once that’s clarified.

Depending on your platform it will range from 10 to 15 GB. Will share more info soon. https://t.co/mhtNWxMwJM

The Witcher 3: Blood and Wine setting

Toussaint is “a land unlike anything you’ve seen in Wild Hunt or Hearts of Stone”, say CD Projekt Red. While the regions of the main game were gripped by war, Toussaint looks rather pleasant at first glance – all rolling hills, sun and colour – but there’s a darkness bubbling beneath the surface.

These lands house no army, and the region is kept safe instead by roaming bands of knights errant, sworn to protect the duchy. They just travel Toussaint slaying monsters and keeping the populace safe, a bit like a witcher, but probably not as tough and with fewer swords.

One of Toussaint’s defining characteristics is the vineyards which pepper its landscape. The vineyard owners are proud clans with a rich heritage in wine creation passed down through centuries. Wine is the heart of Toussaint – the creation of brands like Est-Est and Erveluce are famous throughout The Witcher’s world.

Each of the clans has a coat-of-arms, a deep history and even their own colours. These rivals also hate each other, and they’re actually at war when Geralt arrives, sending thugs to attack the competition. To make matters worse, their cellars have a bit of a monster problem.

Geralt can visit multiple vineyards and chat to the workers and residents there, no doubt having an effect on the outcome of their troubles, as he tends to do.

Mount Gorgon is an inescapable landmark in Toussaint, ever-present wherever you ride Geralt’s horse Roach. It is said to be the tallest mountain the the entire world.

Toussaint is a land where the line between fairy-tales and reality are blurred. These fairy-tale inspirations are clearly evident in the elven palace thrusting out of the middle of Beauclair, the duchy’s capital city, its spires looking like something out of a Disneyland brochure.

This city is full of eccentrics and artists, but like the rest of Toussaint, there’s apparently another layer hidden beneath its surface beauty.

In fact, if you look close enough, there’s evidence of that duality all around the capital. The entire city is built on elven ruins, the remains of which dot the urban sprawl – a scar of a bloody and hostile takeover from the elves centuries back.

Other notable features of Beauclair are its port, which is surrounded by market stalls. There’s also an abandoned house where a cursed, spoon-collecting creature lives, so look forward to that. 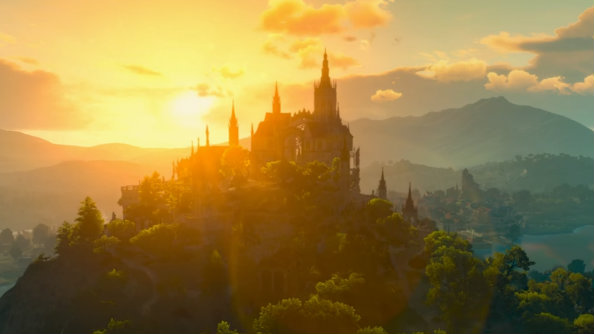 The Witcher 3: Blood and Wine graphics

In Blood and Wine, 80-90 percent of the environmental assets in the game are brand new and created specifically for this expansion.

“You can just look at the market stalls right now: you would never see the same market stalls in the base game,” continued de Gracia. “For the longest time we were like, ‘I want this, I want that,’ and finally we got this chance – we got this room to incorporate other people. We have probably 20 times the amount of vegetables we used to!

“We just wanted to show that we can actually push it to the limit this time.” 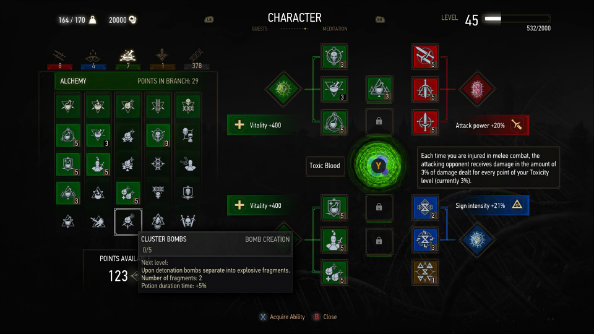 Geralt’s final jaunt in The Witcher 3 will allow players to do some stuff with our silver-haired hero that we’ve never done before, such as:

Blood and Wine will let players push Geralt even further through the skill tree with new mutations. In Toussaint you will come across a scientist who’s been studying Witcher genetics enough to discover how to manipulate them. Discussions with him will open up the Mutations menu, where you can push Geralt’s Witcher abilities even further. These tweaks will allow you to push even a maxed out Geralt further. For an in-depth look on Blood and Wine’s mutations, click that there link.

In another new addition – if you’re more about Geralt’s look than his skills – you’ll be able to dye our witcher’s clothes. No doubt you’ll want to blend in with the canary and blue locals once you arrive in Toussaint.

That’s right – Geralt can restore a disused vineyard and kick back, taking a break from all the monster fighting to relax in the sun. TheCorvo Bianco Vineyard, as it’s called, is a full-on feature that lets you invest time and money into renovating, carving out your own little space in this vast landscape, eventually turning it into a stately manor. It’ll take most of the expansion for you to be able to afford every improvement, so you’ll watch it grow as you stride through the story.

You can even mount beast heads on the walls and dress mannequins in your finest – but not quite good enough, stat-wise – armour sets.

Investment in the vineyard isn’t just about being visually pleasing though. The majority of renovations confer bonus stats to Geralt, or some kind of aid. Plant a garden and you’ll be able to harvest herbs for your potion-brewing. Build stables and Roach will have notably improved stamina. Furnish a guest bedroom and Geralt can invite company over. Here’s an in-depth look at Blood and Wine’s vineyard management.

The Witcher 3: Blood and Wine story

Geralt arrives in Toussaint in the middle of a wine festival, summoned by the Anna Henrietta, the Duchess of Toussaint, to take care of a monster that’s left the knight’s errant stumped… quite literally. Whatever it is, it has a penchant for murdering people and slicing them into parts, which is nice.

According to CD Projekt Red, this won’t just be another fight for Geralt, it will be THE fight. So it’s a foe more dangerous than Master Mirror himself, which begs the question: what is this serial killing creature, if it even is a creature at all? Whatever it is, it’s killing people in a pattern and it’s up to you to figure out who’s next.

Once you’ve purchased Blood and Wine – and passed the prologue in the main game – the expansion will be accessible from a quest in Geralt’s journal. So, if you want, you could start Blood and Wine with a completely fresh Geralt. However, CD Projekt have told us the recommended level for these quests in level 35, so expect a massive challenge if you take it on too early.

When asked for details on starting the expansion, CD Projekt made no mention of being able to access it as a standalone thing, though that was certainly an option with Hearts of Stone. Perhaps this hints at characters from the main game making an appearance in Blood and Wine. After all, what’s the point in Geralt’s vineyard guest room if he’s not going to have to odd sorceress over for some Gwent?

And that’s everything we know! We’ll update this article whenever some new information surfaces, so keep checking back. Until then, read our preview of The Witcher 3: Blood and Wine.