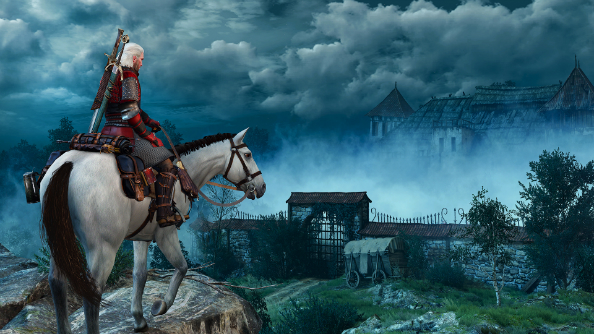 I recently dived back into The Witcher 3: Wild Hunt to check out its first paid expansion, Hearts of Stone, ahead of release. And, if I’m being honest with myself, to paw at the cards of its accompanying physical Gwent deck with intense fascination. Here’s how that went.

I don’t know who to trust. It’s all moved so fast, I haven’t even had time to sit down and consider my alliances over a glass of mead and a game of Gwent. I know there’s something off about the way Gaunter O’ Dim’s perpetual half-smile, and my instincts tell me not to take a man known as ‘The Merchant of Mirrors’ at face value. On the other hand, Olgierd Von Everec just burned his house down and chopped a man’s head off simply because his party got a bit out of hand . Geralt is a Witcher of many talents, but choosing his friends is not one of them.

Two hours into Hearts of Stone’s main quest, I’ve slaughtered an enormous toad who was terrorising Oxenfurt folk as a favour to immortal Sean Bean sound-alike Olgierd. I’ve played unwilling host to an amorous ghost keen on using my body as a vessel with which to ravish an old friend of mine. I’ve been kidnapped, tried in vain to learn a foreign tongue, survived a shipwreck and killed on Olifirian mage whose favourite thing in the world was chucking sandstorms at me.

Anyone even slightly worried that CD Projekt Red’s first paid expansion for The Witcher 3: Wild Hunt might be superficial, or lacking the base game’s bizarre qualities, can pop their paper bags away from their mouths now. 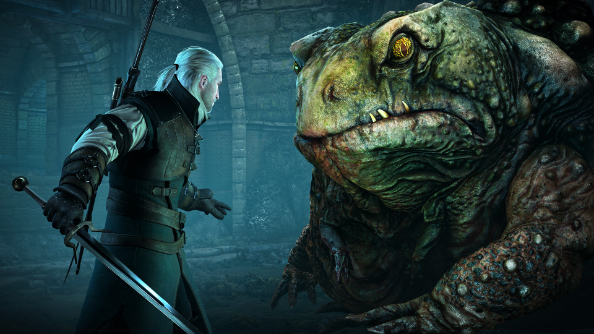 The main quest I’m bumbling my way through represents the meat, but not the entirety, of Hearts of Stone. Its devs estimate that there are 10 hours of new content to cleave through; new Witcher contracts dotted around, new incidental missions (the exclamation marks that pop up on your map as you gallop about), along with a new character buff system, Runewords. This increase Geralt’s resistance to various attack types, along with his attacking power and magical bonuses, and are unlocked by visiting a Runesmith.

It’s not advised to begin Hearts Of Stone as a level 1 sword-swinger, though. Since the events of the expansion are entirely separate from The Witcher 3’s main plot you can dive in at any point, but CD Projekt Red recommends grinding up to level 30 before taking it on. If you’re nowhere near there, you can begin HoS at level 30 and then take your gear and upgrades into a new base game campaign via New Game +. 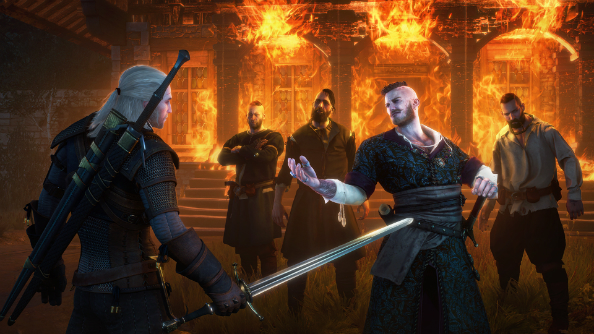 Embarking on the main quest takes you on an initially inauspicious errand to exterminate a monster that went and ate a local baron’s cook as she ventured into the sewers. Reluctantly saddling up Roach again (he’s no more obedient than he was before), I make my way to Olgierd’s mansion and find a bunch of drunken northerners lolloping about in a banquet hall who all insist they’re the one I’m looking for. Nothing out of the ordinary for me, then. I’m from York.

However, these particular Yorkshire boozehounds are all equally insistent that they are Olgierd. This hijinks continues for some time until Geralt’s usually ravernous appetite for banter runs dry. When Olgierd does finally show, with the looks of David Beckham and, as previously mentioned, a voice to rival Sean Bean’s in outright northern sex appeal, he immediately reveals himself to be a character worth paying attention to. He’s a great asset to HoS’s narrative.

There’s a notably higher cadence of boss battles in the section of HoS I sampled than in The Wild Hunt. The base game had plenty of challenging combat, but it didn’t tee up those big ticket monster fights as cinematically as this expansion. It begins ramping up the tension before my fight with the enormo-toad, for example, about ten minutes before I actually meet him. As for the design of said boss battles, it’s about patterns and timing. Watching your foe’s three or four attack variations, waiting for their vulnerable phase, and using potions and magic to maximise your damage during that brief window of opportunity. Also: rolling around like an idiot.

Mechanically, HoS is an opportunity for the development team who spent years building and refining The Witcher 3’s systems to make use of that expertise and create new content in a much tighter development cycle – work on this first expansion began as soon as The Wild Hunt shipped.

For the writers, it’s an opportunity to explore characters old and new without worrying about their impact on the wider game’s canon, as HoS’s events take place in an entirely unconnected timeline. That, apparently, means it’s finally time to pen the old ‘letting a ghost have his way with your mate using your body as a conduit’ quest line, which I genuinely don’t know how I feel about.

At Olgier’s request, I make my way down to the Von Everec family crypt to raise his brother’s spirits, both literally and figuratively. As it happens, said deceased brother has something of an eye for the ladies, and takes a shine to Geralt’s buxome friend (although who isn’t in The Witcher’s world?) Shani, returning from bit-parts in the two previous Witcher titles. Unable to experience phsyical sensations for himself, Von Everec suggests hopping into Geralt’s body to partake in the sins of the flesh for himself. In a quasi-gentlemanly manner, he first asks Geralt if he ever harboured feelings for Shani – because if so, using his body to ravish her would be weird, obviously. I’ll leave it there, but it’s… It’s quite a few minutes to play through.

Hearts of Stone releases 13 October as a digital download, but it does come in a boxed edition as well. A box filled with Gwent cards. Yep, Gwent is a real card game now, presented suitably luxuriously by CDP Red. I’m not sure I’m quite passionate enough to play it IRL rather than in an Oxenfurt tavern, but collector’s eyes will certainly be drawn to it. Each box contains one faction’s deck, comprising 77 cards. The digital download alone is priced at $9.99, and is unreservedly worth the money, whereas the box containing the Gwent deck is considerably pricier at $19.99, which means it’s really only for collectors.