If you weren’t aware, there are actually two actors behind Geralt of Rivia, aka The Witcher. Doug Cockle, of course, is the wonderful growly voice of our favourite monster hunter, but Maciej Kwiatkowski has been Geralt’s motion capture actor for over 10 years – since the original game, in fact.

Kwiatkowski, who also served as combat advisor for the games, is an accomplished sword performer – and to prove it, he’s released a video of himself and fellow swordsman/Witcher fan Alan Padziński cosplaying as Geralt while chopping fruit out of the air with a sword. Yes, it’s the long-awaited real-life Witcher/Fruit Ninja mash-up. It must be Friday. Either that, or a Witcher 3 side-mission mod waiting to happen – we can dream, right?

You can check out the ‘Fruit Witcher’ video below, which was spotted by Kotaku. The description reads, “a lone Witcher investigates a monster-infested riverbank… little does he know, how insidious an enemy he’s going to encounter.” Which of course leads to some deeply dramatic slicing of fruit. Lots of fruit.

Padziński, who runs the YouTube channel the video appears on, is an instructor of Historical European Martial Arts (HEMA). “I’ve been fencing since I was 12,” he says, “evolving through sport fencing, polish saber, kenjutsu, to finally settle on renaissance german longsword.” And now he chops fruit in cosplay for fun. That’s the kind of life we’d want if we weren’t playing videogames all day long. 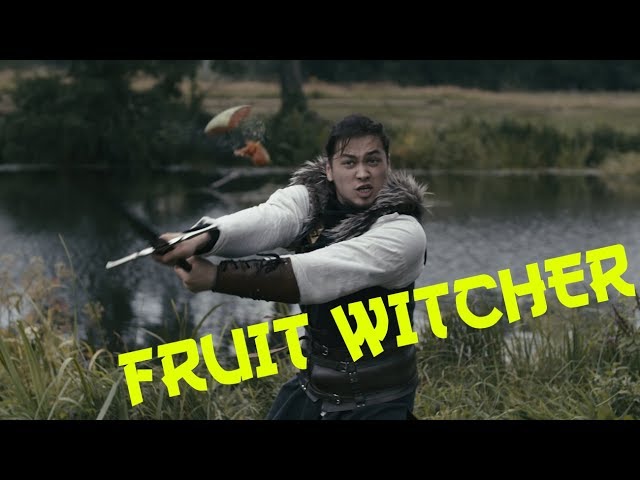 In fact Padziński actually has a whole series of videos where he analyses the combat in The Witcher, and compares the sword techniques to how they hold up in real-life. This is the first time he’s teamed up for a video with Geralt’s actual motion-capture actor Kwiatkowski, although we cannot confirm whether or not this is the first time they’ve got into a pitched battle with fruit.