Brewess. Weavess. Whispess. The three Crones of Crookback Bog are perhaps the most fascinating characters in the extensive cast of The Witcher III, and some of the most unsettling creatures in the history of games. They are rarely at the centre of an event and actual encounters with them are few and far between, but their presence can be felt throughout their domain of Velen.

Where do the Crones come from? They do not seem akin to the modern, sanitised witches we know from TV shows or fantasy games, but rather like beings whose blood-drenched roots stretch back to the morbid imagination of ancient folk tales – including age-old harmful stereotypes against the elderly and women, or the troubling trope of monstrous female sexuality.

It is impossible to pinpoint any single story as the sole influence of the Crones, and yet they do not seem entirely made up by the team at CD Projekt Red. It is as if they were organically grown from the fetid, fertile soil of an ancient method of storytelling – one that has largely been lost.

We can trace the most obvious influences of the Crones through some of the most well-known creatures in fairy tales.

There is the wicked witch from the German tale Hänsel and Gretel, who lures children into her company with her gingerbread house, where she fattens them up before cooking and devouring them. 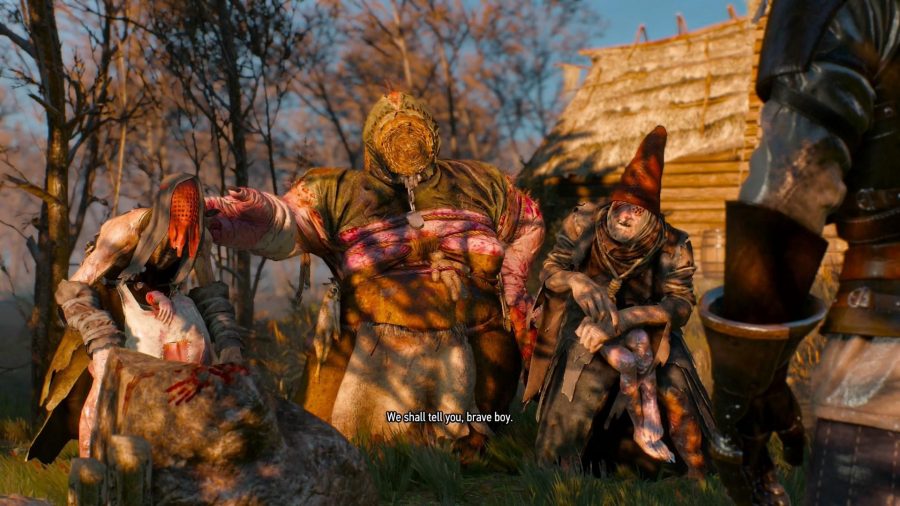 Like Hänsel and Gretel, the peasant children of Velen are sent alone into the haunted woods by their starving parents, and as the house of the Crones is made of wood instead of gingerbread, they use a trail of sweets to ‘guide’ those lost children to their home.

Baba-Yaga of Eastern European folklore is another cannibalistic hag with a taste for children. In some tales, Baba-Yaga appears as a trio of sisters, all named Baba-Yaga. Like many witches (among them Brewess and Weavess), she is associated with household utensils, namely the mortar and pestle she uses to fly. And, like the Crones, Baba-Yaga is dark and dangerous, but also morally ambiguous. Perhaps she will eat you. Or perhaps she will share her food and her immense wisdom, and send you on your way. 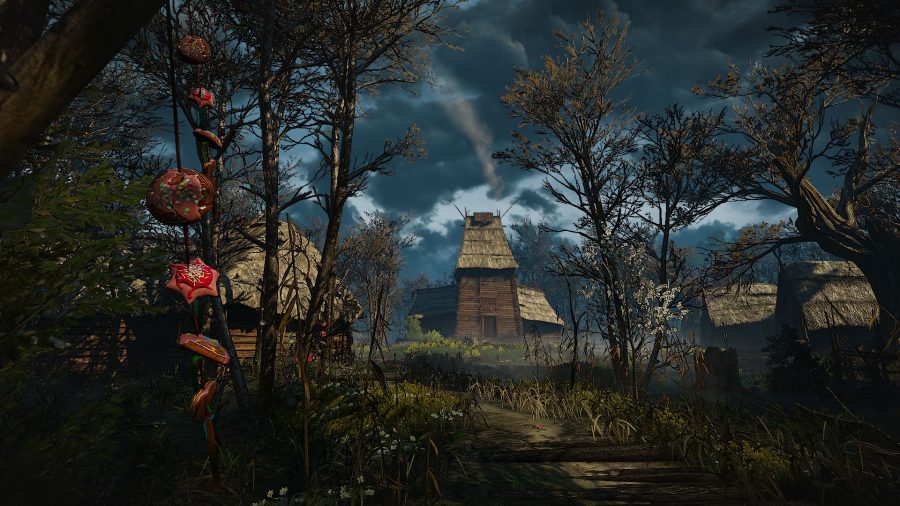 But the claws of the wicked fairy tale witch barely even scratch the surface of the matter. What about the peasants who worship and sacrifice to the Crones as if they are gods? There is nothing like that in fairy tales, but mythology can provide some pointers. The Greek and Roman Fates, as well as the Norse Norns, are a trio of goddesses who determine the future and time of death for all mortals. Like Weavess, who weaves magic tapestries from human hair, they are associated with textiles – they spin, and eventually cut, the threads of fate.

Conflating evil hags and goddesses of fate may seem strange, but The Witcher III is far from the first slice of entertainment to do so. The three weird sisters from Shakespeare’s Macbeth (ca. 1606) are cackling, cauldron-stirring witches who also happen to have a penchant for prophecy. The “weird” in their name does not mean ‘strange’ (even though they certainly are that), but stems from the Old English word ‘wyrd,’ meaning fate. The Crones, too, have prophetic powers, foreseeing the arrival of Ciri from studying beast entrails and omens. Another trio of goddesses from Greek mythology includes Artemis/Diana, Hecate, and Selene. Diana and Hecate especially have been associated with witches and their alleged flights through the night skies for many centuries. 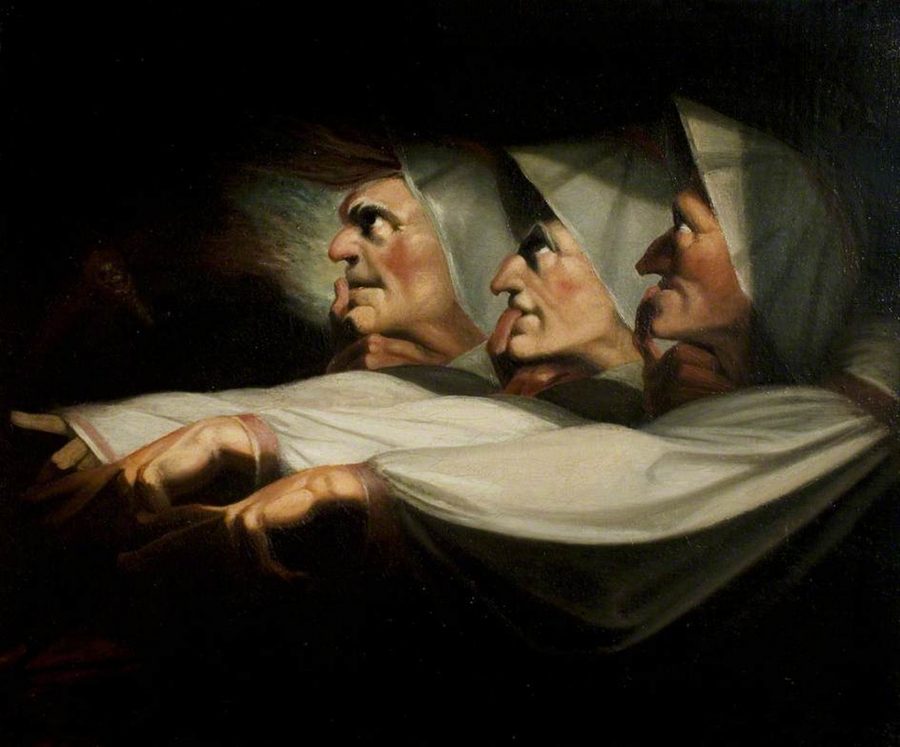 In following these lurid nightmare visions, however, we stray from the folkloric view of the witch. Surprisingly, the witches’ Sabbath wasn’t an ancient belief kept alive by naive peasants, but rather a well-worn literary trope that was repurposed to a ‘new’ (that is, new to the Late Middle Ages) definition of witchcraft that held sway among the learned elite, like clerics, theologians, and jurists (see Norman Cohn’s brilliant book, Europe’s Inner Demons). To those educated men, the witches’ inexcusable crimes were not harmful acts of magic called ‘maleficia’, but apostasy from God through a pact with the devil.

The starving peasant whose cow suddenly died probably begged to differ, and The Witcher III agrees with that sentiment. Outside the mindset of the deluded fanatics of the cult of the Eternal Fire, there is little concern over spiritual harm throughout the game. It is indeed the maleficia employed by the Crones that are the real danger. The effigies found in the Crones’ basement that they use to curse Gran – alias Anna – would have looked familiar to a maleficium-fearing peasant nursed on dark superstition some centuries ago.

The murder and cannibalism practised by the Crones is done away from prying eyes. And so the Sabbath on Bald Mountain does not have much in common with the old definitions of the witches’ Sabbath. In fact, it is quite a festive affair, complete with flowery garlands, and its attendees are not witches at all, but simply peasants worshipping the Crones and hoping for their favour in the form of magical acorns. This Sabbath is not about a harmful conspiracy to bring about the spiritual downfall of the world. From the peasant’s point of view, at least, it is nothing more and nothing less than a local fertility festival. 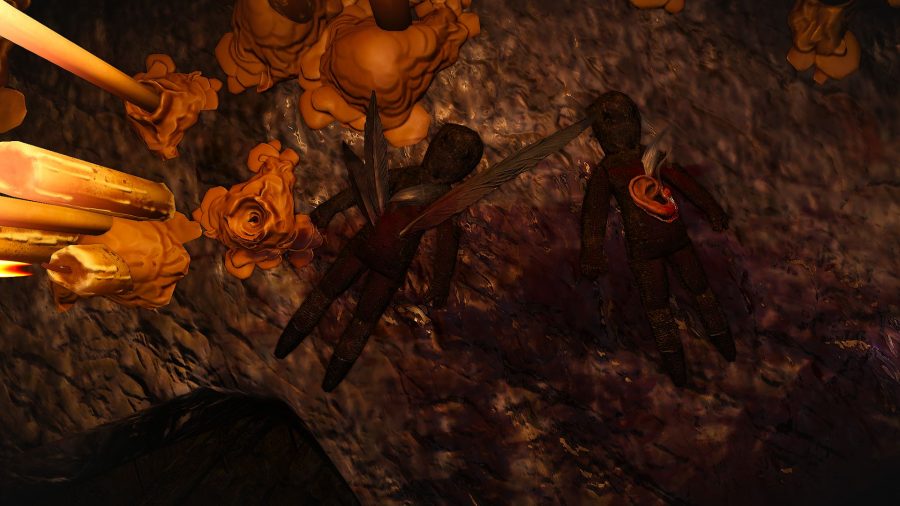 To solve this last puzzle, we can turn to a much more recent influence: neo-paganism. In 1921, Margaret Murray published her academic study The Witch-Cult in Western Europe, which reinterpreted the Sabbath as a misunderstood remnant of a pre-Christian ‘Dianic cult’ (as in the goddess Diana). The adherents of this cult, Murray claimed, worshipped a male and a female god and conducted fertility rites. Her adventurous theory has long been discredited, but not before inspiring other writers and neo-pagan religions like Wicca.

These neo-pagan beliefs often include a male ‘Horned God’ (who is said to have been mistaken by Christians for the devil) as well as a ‘Triple Goddess.’ The Triple Goddess, who consists of Maiden, Mother, and Crone, has a direct echo in The Witcher III as the mother goddess Melitele. It is hard not to think of the Crones as a dark reflection of this mother goddess: after all, there are three of them, they are worshipped as (local) gods of fertility, and the Crone represents the third aspect of Melitele and the Triple Goddess. 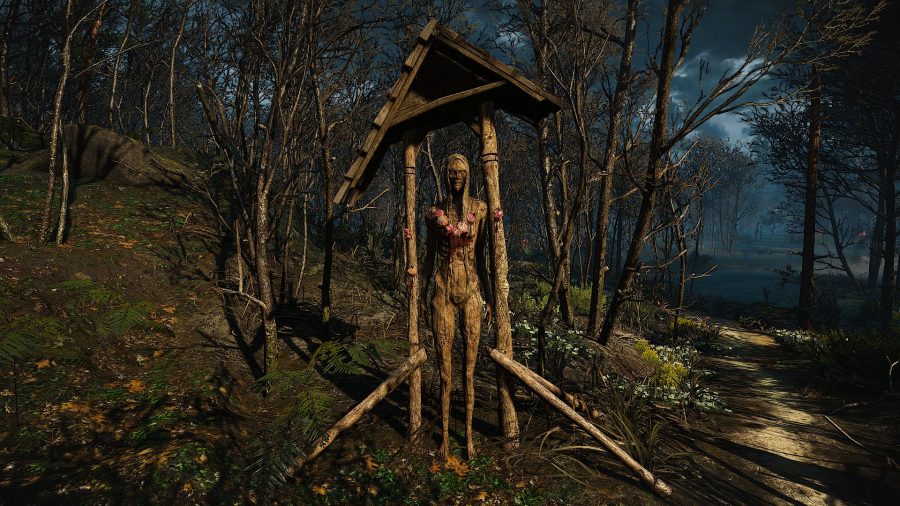 In a way, the manifold being of the Crones also hints at their diverse roots, having been woven together from diverse strands emerging from history, folklore, and mythology, from ancient as well as modern times. These strands were in a complex tangle long before The Witcher III showed up to create a new version of the tapestry, but that does not diminish the game’s creative achievement. Rather than haphazardly tossing its ingredients into a cauldron hoping to get a potent brew, The Witcher III carefully created something that feels both new and seamless, while also nodding towards its disparate, ancient influences.