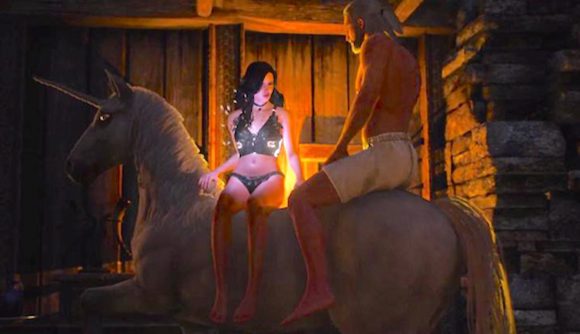 Everybody loves videogame sex. Anytime a new RPG is upon us, the first question prospective fans ask is “who’ll join me on the train to Pound Town?” While the Witcher games have a reputation for sex (one that’s likely to extend to Cyberpunk 2077 romance), not everyone was so excited about those scenes. Including the folks at CD Projekt Red.

“At one point, a producer came in to the writring room and said, ‘we need 12 cutscenes with sex – who wants to write them?’ Nobody wanted to do it,” Witcher 3 lead writer Jakub Szamalek tells Eurogamer. “If I remember correctly, I wrote them all. It was a pretty awkward process for everyone involved.”

Here, “everyone involved” includes a wide range of people across development disciplines. There are the fellow writers who have to comment on the scenes for revision, then the animation team has to figure out how to make it work. “then they have to direct the mo-cap actors, which is awkward, and then the actors have to perform it and deliver the lines, which is also awkward.”

Though as Szamalek says, “sex is awkward anyway so it all works out fine in the end.”

While the Witcher’s got plenty of nudity, Szamalek says “a sex scene should not be just be about showing some bodies. People don’t play games to see sex scenes. There are more efficient ways of seeing that, so we always try to infuse the scene with additional reasons – to add some humour, or tell us more about the characters.”

That’ll probably explain all the stuffed unicorns and bathtub lobsters, then. The full interview with Szamalek has loads more insight on the writing of the Witcher 3, and is well worth checking out. And if you’re, er, thirsty for more, check out the best sex games on PC for more trips to the bone zone which probably made their developers astoundingly uncomfortable.